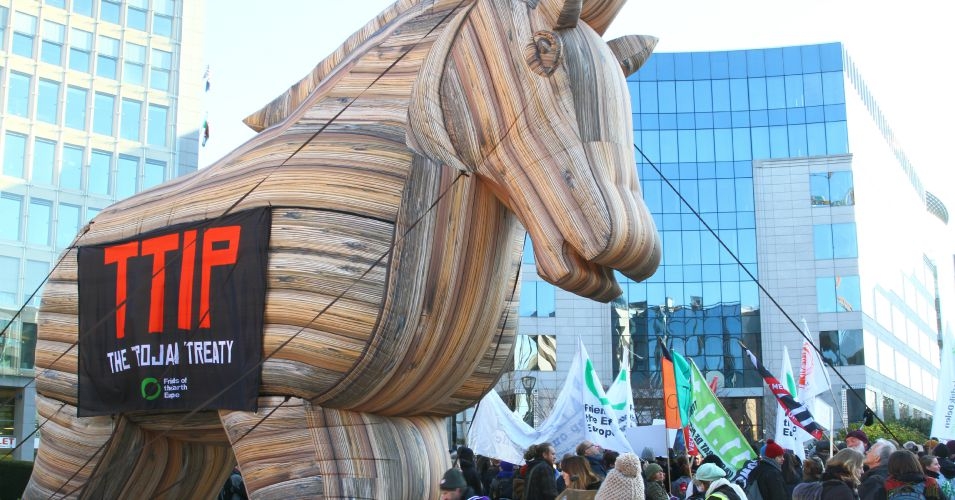 Almost 3 million people across Europe have signed a petition calling on the European Commission to scrap the agreement. (Photo: greensefa/flickr/cc)

While public opposition to the TransAtlantic Trade and Investment Partnership (TTIP)—the massive proposed “trade” deal between the European Union and the United States—has grown steadily since negotiations started two years ago, new signs suggest that official government backing is also faltering across Europe.

“If nothing changes, it will show that there isn’t the will to achieve mutually beneficial negotiations,” he said, before adding: “France is considering all options including an outright termination of negotiations.”

Meanwhile, a group of more than 55 UK members of parliament (MPs) has signed onto a motion expressing major concerns about the mammoth trade pact, which civil society groups have dubbed a corporate giveaway. Caroline Lucas, the Green Party MP, put forward the Commons motion, and it has now been signed by every member of the Scottish National Party group at Westminster, as well as the Labour leader Jeremy Corbyn and his Shadow Chancellor John McDonnell.

Politico‘s Paul Ames wrote of the “cooling ardor on both sides of the Atlantic” earlier this month, saying that since talks began in July 2013, the trade deal “has lost some of its shine.”

“Concern over the impact of TTIP has united disparate groups,” he wrote, “from French farmers to German constitutional lawyers and politicians on the left and right.”

Almost 3 million people across Europe have signed a petition calling on the Commission to scrap the agreement.

Last week, the Oxford-based group ‘We Own It,’ which deals with national issues surrounding public services, held a demonstration against the proposed TTIP, warning that it could lead to private businesses being too heavily involved in public services.

And a much larger action is being planned for October 10 in Berlin, when over 50,000 demonstrators are expected to gather in front of the city’s central train station to protest both the TTIP and a similar deal between the EU and Canada, known as the Comprehensive Economic and Trade Agreement (CETA). That event is part of the week-long International Days of Action against corporate-friendly trade deals.

Opposition to TTIP is particularly intense in Germany, where only 39 percent of the population backs the trade deal.

All of this backs up a thesis put forth earlier this month by American Prospect co-founder and editor Robert Kuttner, who wrote in an op-ed that both the TTIP and Trans Pacific Partnership (TPP) could be “on the verge of collapse from their own contradictory goals and incoherent logic.”