Moscow’s entry into Syria’s war is a challenge to the United States. But it also conjoins the two powers in military-political blunderland. 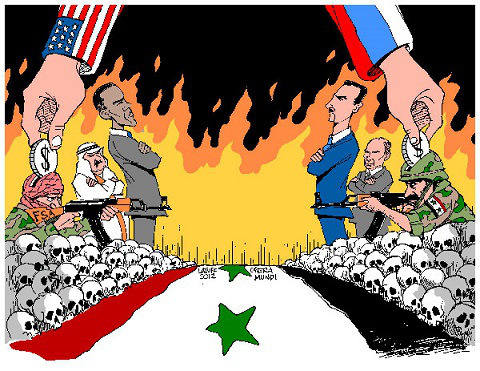 The rapid expansion of Russia’s military presence in Syria, and the start of its bombing campaign on 30 September 2015, add hugely to the complications of the war against Islamic State (ISIS). Moscow states that its motives are to defend Bashar al-Assad’s state and, by attacking ISIS at source, to prevent the movement from recruiting more supporters in Russia itself, especially the Caucasus region. In reality, matters are much more nuanced.

Vladimir Putin is intent on restoring Russian status in the Middle East, which has much diminished over the last two decades. A great concern here is the potential threat of a United States-Iran rapprochement to Moscow’s own relations with Iran, a long-term ally. In this light, increased involvement in Syria – possibly including direct air-support for Assad’s beleaguered ground-forces – is a means to a political end, which Russia’s president can cleverly portray as support for the west in its air-war against ISIS.

This air-war in Syria remains very largely a US endeavour. It has had some regional support, including from Jordan, though its main allies are western states: France, Australia and Canada, with British involvement a possibility if domestic political conditions allow.

Now, Russia’s intervention creates a dilemma for Washington: at best messy, at worst opening the possibility of inadvertent interaction and even confrontation. Israel’s new connections with Russia, including a hasty visit to Moscow by prime minister Binyamin Netanyahu, add an unwelcome element to the situation for the White House. And reports suggesting that the US military might be willing to coordinate with the Russians only emphasise America’s difficulty in finding a clear response…

All of this complexity raises the possibility, frequently addressed in these columns, of an untoward happening that changes the picture. This is the AIM problem (accidents, incidents and mavericks) whereby, in a tense situation, a single incident creates escalating violence and chaos that no one intends (see, for example, “Syria, war and negotiation“, 19 September 2013).

The new geopolitics of Syria apart, there is mounting evidence that the whole western-led war against ISIS is going nowhere. With the second year of the air-war underway, the Pentagon states that the thousands of US air-raids have killed an estimated 10,000-15,000 supporters of ISIS. The uncorroborated claim is also made that this number includes few if any civilians.

Whatever the truth, it is certain that ISIS propagandists are using every skill and social-media channel to promote a single, relentless message: their movement is the true protector of an Islam under grievous attack from the west’s “crusader” forces, and therefore deserving of support from around the world.

Moreover, it is working.  A year ago, US government sources were reporting that 15,000 people from eighty countries had travelled to Iraq and Syria to join the fight. After over a year of an intense and relentless air-war, the estimate has doubled to 30,000 from 100 countries.

In short, ISIS has attracted far more recruits than have been killed in the air-war. Meanwhile, Barack Obama’s administration concedes that efforts to train “good” rebel forces in Syria have been disastrous: $500 million was spent, and wasted, on what amounted to a handful of paramilitary fighters.

In Iraq, things are also troubled. The attempt to retake Ramadi, the strategically important capital of Anbar province, is now in a stalemate, even though the Iraqi army contingents backed by US air-power greatly outnumber the ISIS paramilitaries. The uncomfortable reality is that the more the west fights ISIS in Syria-Iraq the more robust the movement becomes, implying that the entire military project is deeply counterproductive (see “Remote control vs Islamic State: a new phase“, 10 September 2015).

Moreover, ISIS affiliates are making progress in Libya, Afghanistan and even Russia’s Caucasus. In the last case, Moscow’s bombing in Syria will fuel ISIS propaganda targeted at Russia’s Muslim population of over 16 million. The group’s single-minded recruitment of more “protectors of Islam” may receive a significant boost.

Russia, then, is joining the west in a deeply flawed strategy. Putin has fallen into the same trap as everyone else. A range of capitals – London, Paris, Washington, Ottawa, Canberra and, now, Moscow – displays a striking absence of the much wider thinking that is needed to confront and limit the singularly brutal but effective ISIS movement.

The war will go on, more people will die, ISIS will consolidate, and the politicians will dig in. At some point an alternative approach will be tried. But for now there is little sign of it.

Paul Rogers is professor in the department of peace studies at Bradford University, northern England. He is openDemocracy’s international security editor, and has been writing a weekly column on global security since 28 September 2001; he also writes a monthly briefing for the Oxford Research Group. His books include Why We’re Losing the War on Terror (Polity, 2007), and Losing Control: Global Security in the 21st Century (Pluto Press, 3rd edition, 2010). He is on Twitter at: @ProfPRogers