How many deaths of black youth are necessary before they are considered ‘genocide’ or political assassinations? 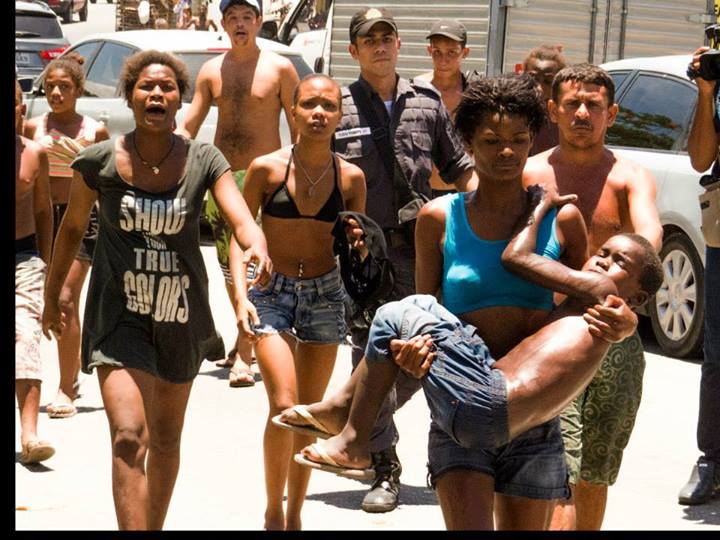 Imagine a place where eight Michael Browns are killed every day. Imagine a place where extortion, rape, torture, and killings are routine. This is Brazil. Police terror in Brazil has become so banal that it has lost the media’s interest. Some of us may recall the global media’s coverage of massacres such as Candelaria (1993), Carandiru (1992), Eldorado dos Carajas (1996), and Crimes de Maio (2006). Now, more than ever, slaughter has become the police’s modus operandi. One would expect that with the social achievements promoted by the Workers’ Party in the last decade (40 million people came out of poverty in Brazil), police terror would disappear or at least be far less frequent. Quite the opposite has occurred. In Brazil, there is one thing that unites both left and right-wing governments: their incapacity to fight against police terror. At times, governments in both camps have been complicit with the police state.

Slaughter as a routine practice in Brazil is not an overstatement.  The Brazilian police are so corrupt, brutal and out of control that in the last eight months (from January-August 2015), there had been fifteen slaughters with 56 victims in the city and metropolitan region of São Paulo. Although investigations are ongoing, everything indicates that the highly corrupt and delinquent Military Police is implicated in the killings. Each time a new report on killings by the police is disclosed, it reveals astonishing levels of death tolls. No one seems to care. After all, the majority of the victims are black residents in the favela.

Perhaps you care: so let’s review the numbers. In the last ten years (from 2002-2012), the Brazilian police force killed 11, 200 individuals allegedly for resisting arrests. In 2014, the police killed 3022 civilians, according to preliminary numbers by the Brazilian Forum of Public Safety. As of September 2015, the São Paulo and Rio’s military police has killed 494 and 459 people respectively. According to Amnesty International, the police are responsible for as much as 15% of the homicides in Rio de Janeiro. In São Paulo, the police are responsible for as much as 1 out of every 5 violent deaths.

With such a scenario, where should the victims of police terror seek protection? Should they call the police? How should they resist a military power that regards black Brazilians as the enemy of the state and civil society? There is no space to negotiate peace because it is not a war. It is a massacre. There is no room to surrender because there are no two armies and the ultimate goal is not ‘peace.’ The ultimate goal is death. When the police invade the favela, everyone is considered a criminal regardless of their status as ‘worker’, ‘thug,’ ‘churchgoer’ or ‘dealer.’

The Brazilian police hold absolute power granted by elected government officials and a failed judiciary system. Geraldo Alckmin, the right-wing governor of São Paulo responded this way to ROTA’s (the Military Police Special Unity) assassination of nine individuals: “whoever didn’t resist arrest is [still] alive.” Similarly, Rui Costa, left-wing governor of Bahia responded with a joke to the police operation that resulted in the assassination of twelve individuals in the periphery of Salvador. Costa remarked that, “an officer is like a forward player in front of the goal. He has to decide in seconds, how to score … if an officer scores he will be applauded, if he misses the goal he will be criticized.” Apparently, the police killing in this case was a 12×0 score. 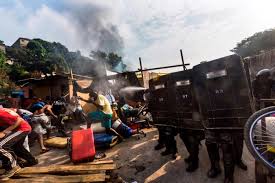 The assassination of (mostly black) favela residents finds justification in the conservative media and in civil society’s call for more blood, when not joining the police in the killings. A recent wave of white middle class mob violence against poor black individuals throughout the country points to the reemergence of lynching in Brazil’s ‘racial democracy’.

Quite often, newspaper outlets re-kill the dead by labeling them as ‘bandit,’ or ‘criminal’. In my own work with victims of police terror in São Paulo, I have witnessed mothers working to secure paperwork to prove the innocence of their dead children and thereby repair their children’s post-mortem tarnished images. Newspapers invariably copy and paste information from the police report, which is a deliberate fraudulent narrative that victimizes officers and criminalizes the dead. If an officer is killed, the police invade the favela and kills dozens of individuals in yet another slaughter.  The twenty individuals killed after an officer was killed in the periphery of Manus in June 2015 and the fifteenth slaughter in the periphery of São Paulo in September 2015, are two examples of the logic of vengeance that informs policing practices in Brazil.

In the current institutional arrangement, there seems to be no hope in changing the Brazilian police force. Contrary to many other countries, public safety is a responsibility of each state in Brazil. There is no coordinated effort between the federal and state government to train and control the police. Brazilian President Dilma Rousseff promised to push forward a new legislation reassigning responsibilities but this seems unlikely in light of her administration’s current political crisis. Meanwhile, the police continue to hold extraordinary discretionary power–far beyond anything one would consider outrageous. Even more troublesome is that wrongdoings by officers are investigated by the police itself in a predictable corporativist culture that almost always results in no formal charges.

The cases that are investigated by the public attorney (Ministerio Publico) are quite often archived (closed) for ‘lack of evidence’ or justified as the officer was ‘strictly performing his duties.’ As social activists have long acknowledged and Amnesty International’s last report confirms, there is a shared belief among members of the judiciary that the police are just cleaning up the city. On his Facebook page, Public Prosecutor Rogerio Zagallo recently expressed what most of his colleagues seem to believe as well. Upset with a protest blocking the transit, he posted the following message from his car: “someone tell the police that if they kill those motherfuckers I will file the police inquiry.”

Corrupted law enforcement institutions have created what the Inter-American Commission of Human Rights has described as a “perverse chain of impunity,’ which the families of the dead cannot break through. A case in point:  May 2016 will be the tenth anniversary of what is  known as the “Crimes de Maio” (when a revenge of PCC’s attacks and killing of 59 officers resulted in the death of 505 civilians) and there are still no charges filed. Not one single charge had been filed for a bloodshed revenge police killing of 505 civilians over a course of two weeks.

On the contrary, civil society and conservative media outlets have lauded and promoted government officials and police officers directly or indirectly implicated in these and many other deaths. Colonel Paulo Telhada, a former commander of the ROTA (São Paulo’s Special Police Unity) was not only elected to São Paulo’s legislature by selling himself as the one who killed 36 individuals to defend civil society, but he also became a member of the state house of representative’s commission of human rights. 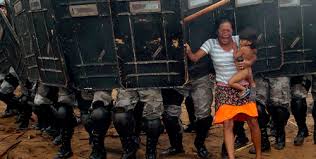 An indigenous woman holds her child while trying to resist the advance of Amazonas state policemen in Manaus who have been sent to evict natives. [2008] Photo via Tumblr

Black activists have unapologetically denounced state terror in Brazil by calling it ‘black genocide.’ Predictably, many view this claim as an overstatement and no serious actions have been taken by the Brazilian state despite the statistics showing a persistent and astonishing number of black deaths. Although not all of these deaths are related to the police, they are certainly facilitated by the state’s delinquency.  In the face of such indifference, activists have cried out for international solidarity. As we mourn our dead and struggle to imagine and make a world without the police, we desperately need to end the Brazilian police’s untiring machine of violence and terror. I outline a list of recommendations and actions below, echoing some of the concerns and demands of the black movement in Brazil:

Finally, alternative media outlets and international human rights organizations should refrain from using the language of the state to refer to assassinations by the police. Terms such as ‘resisting killings,’ ‘excessive use of force.’ ‘unlawful,’ and ‘lethality’ are not neutral and they help to legitimize police terror. How many deaths of black youth are necessary before they are considered ‘genocide’ or political assassinations?

Calling attention to the need for international solidarity may be the only possibility to unveil the domestic regime of terror that the Brazilian state maintains, although we should not raise our hope too high. An indicative: the United Nations has already  recommended the Brazilian government to abolish the Military Police. Yet, while the UN expresses concerns, the Brazilian government establishes partnerships with the United States and Israel to supply the Brazilian police with military technology and training on urban counter-insurgency initiatives. The message is very clear: more police, more prisons, and more deaths.

Jaime A Alves is an Afro-Brazilian journalist and member of Uneafro-Brasil. He is also an assistant professor of Anthropology at the College of Staten Island/CUNY