‘We are in mourning, we are in protest, we are on strike.’ 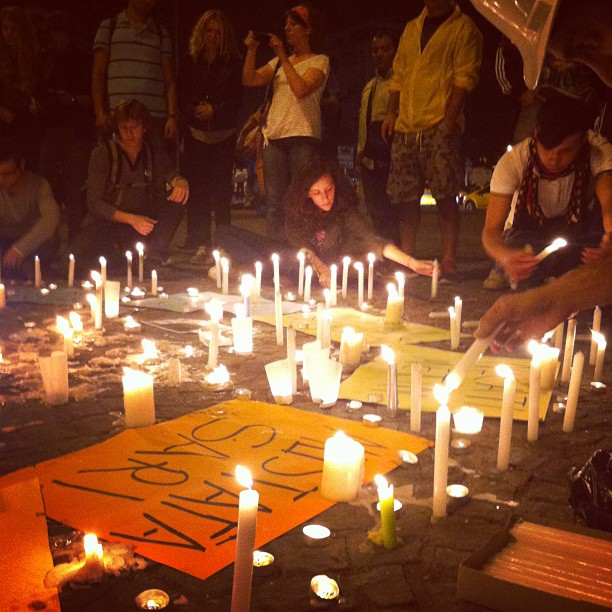 As anger and suspicion towards the Turkish government mounts in the wake of a deadly bomb attack over the weekend, the country’s largest labor union and the left-wing People’s Democratic Party (HDP) launched a nationwide strike on Monday to “protest the fascist massacre and to commemorate the death of our friends.”

From the University Medical Hospital in Istanbul to the main square in Adana, located in the country’s south—workers, students, and pro-Kurdish campaigners staged mass protests and pickets across the country, in the first of a two-day general strike. Employees of the municipality of Maltepe walked joined in the work stoppage, holding signs that read, “We are in mourning, we are in protest, we are on strike.”

The Confederation of Public Sector Trades’ Unions (KESK), the Confederation of Progressive Trade Unions of Turkey (DİSK), the Turkish Medical Association and the Union of Chambers of Turkish Engineers and Architects (TMMOB) have all thrown their weight behind the strike, which comes just days after a bombing killed at least 128 people and wounded more than 200 at an Ankara rally for “Labor, Peace, and Democracy.”

“We came together to struggle for peace against war, for freedom and democracy against violence and oppression and for labor against corruption and exploitation,” declared the Turkish Medical Association in a statement released Saturday announcing the general strike. “We are sad, we are angry, we are mourning, and we are rebelling.”

The Turkish government on Monday cast suspicion on ISIS for Saturday’s attack, but many are distrustful of the official line on the bombing, which follows another deadly bombing of pro-Kurdish activists in Suruc in July. Some are charging that the government is responsible—either directly or indirectly—through intelligence failures and its efforts to stir anti-Kurdish sentiment.

Thousands mobilized across Turkey over the weekend—including at funerals—to express their outrage at the government, with many carrying placards that read “killer state.” Meanwhile, solidarity protests took place around the world, from Paris to London.

Anger is also rising following reports that, in the immediate wake of the bombing, police blocked ambulances and medical providers attempting to reach the victims. And on Sunday, when large crowds sought to return to the sight of the attack to mourn the dead, they were prevented by riot police, in what writer Julian de Medeiros called “an acute example of the Turkish State’s obsession with post-mortem protocol, or rather, the illusion of control—in which citizens are seen as a nuisance, to be endured but not protected.”

Meanwhile, the Turkish government has imposed media censorship on coverage of the attack, and many are reporting that their access to Facebook and Twitter has been blocked.

Saturday’s mobilization was organized by the Turkish Medical Association, the country’s two largest opposition unions (DİSK and KESK), the national Chamber of Architects and Engineers (TMMOB), and the ‘June Movement,’ which emerged from the 2013 Gezi Park protests. It was also coordinated by the opposition, pro-Kurdish HDP, which in June won parliamentary seats for the first time in a major blow to president Recep Tayyip Erdoğan’s ruling AKP party’s outright majority.

Protesters were demanding an immediate halt to state violence against Kurdish communities within and beyond Turkey, which escalated following the June election when the government abandoned its peace process with the Kurdistan Workers Party (PKK).

What’s more, the rise in tensions is bleeding into regional fighting. Since Erdoğan’s government announced this summer it was “joining” the anti-ISIS coalition, and allowing the U.S. to use its bases, the Turkish air campaign has been waged almost entirely against Kurdish groups in Syria and Iraq—which are themselves fighting ISIS. Asli Ü. Bâli, international law professor at UCLA, told Democracy Now! on Monday that the Turkish government has “used the cover of the coalition to go after the PKK.”