‘This sustainable development proposal is anything but sustainable.’—Ilana Solomon, Sierra Club 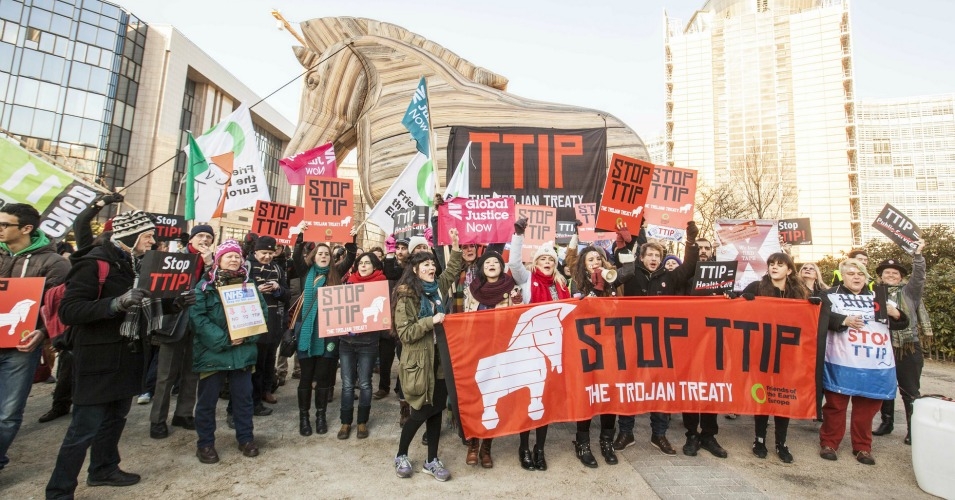 Demonstrators at a TTIP protest in Brussels. (Photo: Friends of the Earth Europe/Lode Saidane via flickr)

A leaked of draft of negotiating text from a pending EU-U.S. trade deal shows that the bloc is ready to empower corporate polluters while going back on its promise to uphold environmental protections, groups on both sides of the Atlantic warn.

The text is of the sustainable development chapter of the Transatlantic Trade and Investment Partnership (TTIP) and was published Friday by the Guardian—the same day negotiators wrapped up the 11th round of talks on the deal in Miami.

The Guardian reports that the text “contains only vaguely phrased and non-binding commitments to environmental safeguards”—that’s despite a promise (pdf) issued in January that the EU would seek to “safeguard basic rules that protect people’s rights at work and the environment.” The UK paper adds, “No obligations to ratify international environmental conventions are proposed, and ways of enforcing goals on biodiversity, chemicals and the illegal wildlife trade are similarly absent.”

Sierra Club, Friends of the Earth Europe, and PowerShift published on Friday an analysis (pdf) of the document, and write that “[t]he chapter’s weak and unenforceable environmental provisions stand in sharp contrast to the strong and highly-enforceable privileges for foreign investors that are proposed for TTIP.”

“Nothing in the leaked chapter would prevent foreign companies from using those special privileges to attack environmental policies in unaccountable trade tribunals. And while the chapter expresses concern about climate change, TTIP would actually facilitate increased trade in fossil fuels—an explicit goal set by the Council of the EU,” the analysis continues.

“This sustainable development proposal is anything but sustainable,” Ilana Solomon, director of the Sierra Club’s Responsible Trade Program, said in a statement accompanying the analysis.

“Nothing in the chapter would change the fact that TTIP would empower corporations like Shell and Chevron to challenge climate and environmental policies in private trade tribunals and lead to increased exports and production of oil and gas,” Solomon added.  “The United States cannot afford to join trade deals—Trans-Pacific, Trans-Atlantic, or otherwise—that set us back on environmental progress and climate action.”