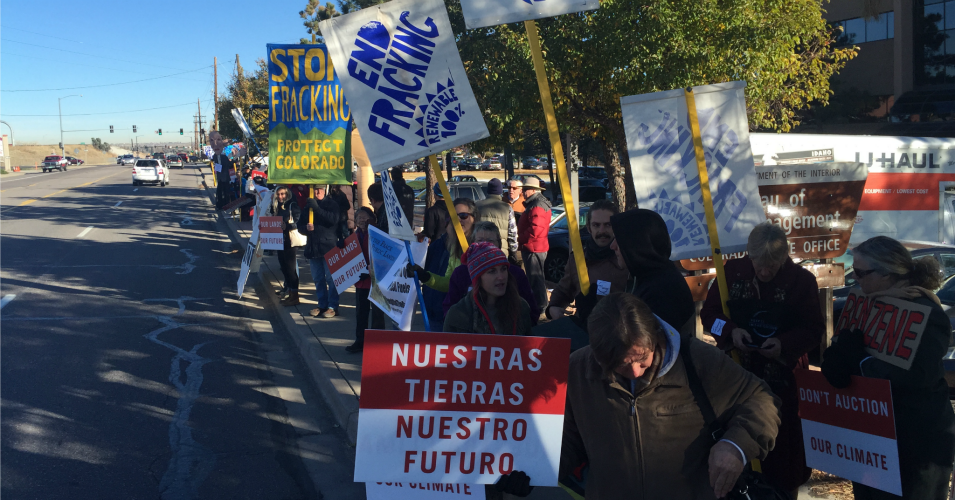 “Selling of our public lands to the highest bidder should not be allowed,” said Zabrina Arnovitz with Rights For All People, a Colorado-based immigrant justice group that participated in Tuesday’s protest. (Photo courtesy of Taylor McKinnon/Center for Biological Diversity)

As the federal government moves to sell off public land to private fossil fuel corporations, opponents from across the United States charge that such auctions constitute affronts to local communities, crimes against the climate, and attacks on the common good.

That opposition was demonstrated early on Thursday as people from local and national organizations rallied outside of the Bureau of Land Management’s (BLM) oil and gas lease sale in Lakewood, Colorado—where more than 90,000 acres of publicly-owned land in the central and eastern parts of the state are on the auction block.

In fact, the protesters—who hail from groups including Coloradans Against Fracking, Rainforest Action Network, and Direct FRACKtion—have a name for the BLM sale: a “climate auction.”

Speaking from the protest, Taylor McKinnon of the Center for Biological Diversity told Common Dreams that the auction in question is part of a quarterly lease sale that happens all over the western United States.

But amid growing worldwide concern about climate change, such routine auctions are now at the center of public protests—from Wyoming to Utah.

Such sales are a major contributor to overall greenhouse gas emissions in the United States.

An open letter to the White House, released in September by over 400 environmental organizations and leaders, declares: “Over the past decade, the burning of fossil fuels from federal leasing has resulted in nearly a quarter of all U.S. energy-related emissions and nearly 4 percent of  global emissions.”

And according to a report released in August by Ecoshift consulting, commissioned by Friends of the Earth and the Center for Biological Diversity, a halt to new federal leasing could prevent up to 450 billion tons of greenhouse gases from entering the atmosphere.

Earlier this month, a handful of Democratic senators, along with 2016 presidential hopeful Bernie Sanders, introduced legislation to prohibit all new coal, oil, and gas drilling on federally-owned lands and waters—from the Gulf of Mexico to the Arctic Circle.

“Selling of our public lands to the highest bidder should not be allowed,” said Zabrina Arnovitz with Rights For All People, a Colorado-based immigrant justice group that participated in Tuesday’s protest.