As more than a dozen governors pledge to close state borders, advocates decry actions as cowardly and ‘un-American’ 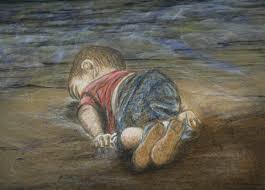 Aylan Kurdi, whose image of his tiny 3-year-old body shocked the world when it washed up on the shores of the Aegean Sea in late August. He was a Syrian Refugee. Image via Facebook.

UPDATE: As of this time, there are 25 states whose governors say they will refuse refugees.

In what appears to be a textbook case of xenophobia and political fearmongering in the wake of a tragedy, more than a dozen U.S. governors have declared their states off-limits to Syrian refugees in the days following Friday’s terror attacks in Paris.

The leaders of Wisconsin, North Carolina, New Hampshire, Arizona, Florida, Ohio, Maine, Mississippi, Louisiana, Illinois, Indiana, Massachusetts, Texas, and Arkansas on Monday all pledged to stop or oppose any additional Syrian refugees from resettling in their states, following announcements made by the governors of Alabama and Michigan on Sunday.

In a statement Monday, the Council on American-Islamic Relations (CAIR), the country’s largest Muslim civil liberties and advocacy organization, decried the rolling announcements as “un-American,” saying those who reject refugees are allowing fear to overrun national ideals.

“This un-American rejection of refugees, who will face significant security checks prior to entry, sends entirely the wrong message,” CAIR said. “Governors who reject those fleeing war and persecution abandon our ideals and instead project our fears to the world.”

Responding to news that Michigan Governor Dan Snyder would rescind his previous commitment to accept Syrian refugees into his state, Lonnie Scott, executive director of Progress Michigan declared: “This type of behavior is the exact cowardice and capitulation that the terrorists seek to force out of our elected leaders. Instead of stoking the fear that drives his party to a frenzy, Gov. Snyder should do the right thing and show Michiganders that we’re a state that will accept responsibility as global citizens to do our part to help people in crisis and that we can do that in a way that is both safe and responsible.”

Similarly, the ACLU of Florida issued a statement denouncing Governor Rick Scott for “blaming Syrian refugees for the very violence they are escaping.”

“We mourn those lost in the horrific attacks in Paris, Beirut and Baghdad, and wish to express our condolences, grief and condemnation,” the ACLU continued. “However, we must also warn against what we have often seen since 9/11: the impulse in the wake of a terrorist attack to overreact and curtail the freedoms that make our country great.”

In response to the prospects of a similar backlash in Europe, the UK-based refugee council said on Monday, “The world was moved by the response of Parisians who rallied round to help each other—opening their doors to people fleeing the murderous attacks. We should follow this example by offering safety to others who need it. We cannot leave refugees fleeing to Europe from these very same terrorists without safe haven.”

“We cannot use these deplorable events as an excuse to turn our backs on vulnerable refugees; compromising our most cherished values in the face of terror,” the statement continued. “We cannot let them divide us. We cannot let hatred and fear win.”

The windfall of anti-refugee sentiment came as U.S. President Barack Obama on Monday announced that the recent terror attacks would not change his plan to accept 10,000 Syrian refugees.

“The people who are fleeing Syria are the most harmed by terrorism; they are the most vulnerable as a consequence of civil war and strife,” Obama declared at the close of the G20 summit in Turkey. “We do not close our hearts to these victims of such violence and somehow start equating the issue of refugees with the issue of terrorism.”

“We don’t have religious tests to our compassion,” he added.

In a letter sent to Obama on Tuesday, Texas Governor Greg Abbott specifically urged him to abandon this plan. “Neither you nor any federal official can guarantee that Syrian refugees will not be part of any terroristic activity,” Abbott stated. “As such, opening our door to them irresponsibly exposes our fellow Americans to unacceptable peril.”

Not to be outdone, Senator Rand Paul on Monday said he would introduce a bill to put an immediate moratorium on U.S. visas for refugees “as well as others from obtaining visas to immigrate, visit, or study in the U.S. from about 30 countries that have significant jihadist movements.” Paul told reporters in a press call that the legislation would be paid for “with a special tax on arms sales to any of these countries.”

Despite the political bombast, legal experts are questioning whether such restrictions can even be made by state officials. According to the U.S. Supreme Court ruling in the case of Hines v. Davidowitz, “the supremacy of the national power in the general field of foreign affairs, including power over immigration, naturalization and deportation, is made clear by the Constitution.”

Or as Jen Smyers, associate director for immigration and refugee policy at the Church World Service, told Mother Jones, “There are really clear discrimination protections against saying someone can’t be in your state depending on where you’re from.”

However, as journalist Glenn Greenwald noted in this tongue-in-cheek Biblical reference, elected officials claim to take their directions from a higher moral authority.