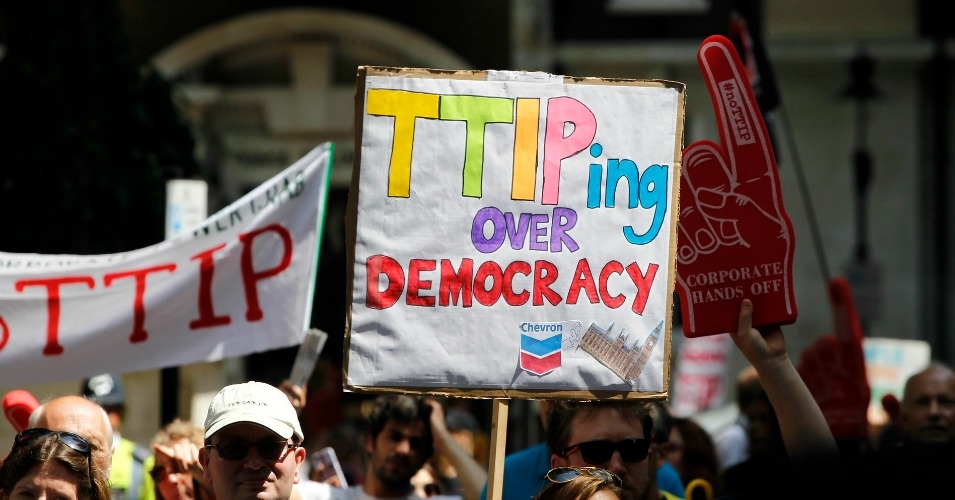 “The lines of demarcation in TTIP are between the mutually exclusive interests of transnational big business and people and the planet; if the deal passes, the former wins and the latter lose,” writes Mark Dearn. (Photo: Global Justice Now/flickr/cc)

The documents, obtained by the Guardian, offer “an extraordinary glimpse into the full degree of collusion between the European commission and multinational corporations seeking to use TTIP to increase U.S. exports of fossil fuels,” said John Hilary, the director of the UK organization War on Want. “The commission is allowing the oil majors to write the proposed energy chapter of TTIP in their favor.”

According to the Guardian: “Officials also asked one oil refinery association for ‘concrete input’ on the text of an energy chapter for the negotiations, as part of the EU’s bid to write unfettered imports of U.S. crude oil and gas into the trade deal.”

What’s more, the documents show that at a September 2013 meeting, EU trade officials gave a briefing on the state of TTIP talks to two trade groups and 11 oil and gas companies—including fossil fuel behemoths Shell, BP, and ExxonMobil. The latter company is currently the target of an escalating public awareness campaign in the U.S. over its decades-long cover-up of its role in global warming.

The Guardian explains that the EU is pressing for a guarantee in the enormous “trade” deal that the U.S. will allow free export of oil and gas to Europe—an undertaking that would require a $100 billion infrastructure investment, according to the heavily redacted documents.

In particular, wrote War on Want campaigner Mark Dearn on Friday, “a key aim of TTIP has been to destroy regulations that prevent high-polluting tar sand crude oil from entering Europe.”

But, Dearn said, “[a]n agenda that promises a high-carbon future unmasks the spin of rich country promises to phase out fossil fuels by the end of this century, highlighting the corporate nature of the deal and its devastating consequences for climate change.”

Indeed, as the Brussels-based think tank Transport & Environment warned earlier this week, “cheaper fossil energy means higher carbon emissions from increased consumption while crowding out renewable sources, all of which runs counter to the EU’s ’40/27/27′ climate and energy targets for 2030.”

Rather than as a vehicle for “old-style energy trade liberalization,” the think tank argued, trade negotiators should see the TTIP as an opportunity to  phase out fossil fuel subsidies and “create a sustainable energy market that tackles energy security and diversification with renewable technologies and energy efficiency.”

To that end, as world leaders gather in Paris for international climate negotiations, climate change and trade agendas should be considered in tandem.

“Far from being a simple case of European interests versus U.S. interests,” Dearn wrote, “the lines of demarcation in TTIP are between the mutually exclusive interests of transnational big business and people and the planet; if the deal passes, the former wins and the latter lose.”