“These attacks on clinics are part of a long history of ideologically-driven violence. They’re perpetrated by an extreme minority that’s committed to ruling through fear and intimidation.” 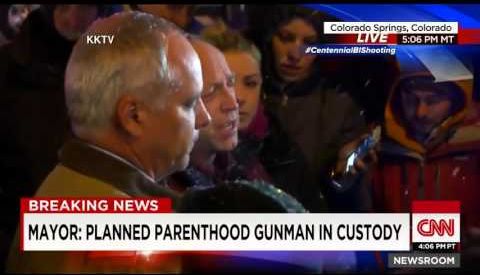 Reproductive rights groups are formally calling on the U.S. Department of Justice (DOJ) to investigate recent attacks on Planned Parenthood clinics, including last Friday’s shooting in Colorado, as acts of domestic terrorism—sparked by “hateful rhetoric” from Republican leaders and anti-choice organizations.

“These attacks on clinics are part of a long history of ideologically-driven violence. They’re perpetrated by an extreme minority that’s committed to ruling through fear and intimidation,” a coalition of advocacy groups comprising NARAL, UltraViolet, CREDO Action, and the Courage Campaign wrote in a recent petition to Attorney General Loretta Lynch demanding the inquiry. “Let’s call it what this is—domestic terrorism.”

Just 48 hours before a gunman opened fire in a Planned Parenthood clinic in Colorado Springs last Friday, killing three people and wounding nine, the coalition had also asked the DOJ for help protecting patients and staff from death threats. Since the shooting, the petition has garnered over 300,000 signatures and the support of more than 140 reproductive rights groups and abortion providers.

Moreover, an investigation that acknowledges the attack as domestic terrorism “[could] actually start to re-frame the way we talk about abortion in our society,” said Ilyse Hogue, president of NARAL Pro-Choice America, in a press call Wednesday. Doing so would go a long way to “disband the witch hunt” against Planned Parenthood that has served as the touchstone for the Republican party’s “race to the bottom,” she added.

Last week’s violence was the inevitable result of anti-choice political language “meant to vilify Planned Parenthood and stoke the outrage of the party’s anti-woman base,” said Heidi Hess, campaign manager of CREDO Action.

Indeed, the shooting came in the midst of a particularly tense and volatile year for women’s rights, as the release of several controversial “sting videos” purporting to show Planned Parenthood officials discussing the sale of fetal tissue launched a renewed right-wing crackdown on reproductive healthcare. The organization found itself the subject of a House investigation and the target of numerous state-level defunding attempts, even as clinics nationwide were cleared of wrongdoing or misuse of taxpayer funds.

“Since the release of the first deceptively edited video… anti-choice extremists have launched an unprecedented and multi-pronged assault against women’s reproductive rights,” the coalition wrote to Lynch.

Anti-choice hyperbole “has been at a boiling point around Planned Parenthood specifically and abortion generally,” Hogue added. “This kind of rhetoric has historically always led to violence.”

While there is no official DOJ domestic terrorism statute, the agency has “an established history of protecting freedom from domestic terrorism,” said Shaunna Thomas, co-founder of UltraViolet. “This is no different.”

Individual outposts and staff in six states have been the targets of arson attacks and death threats since July, the coalition said.

Meanwhile, Republican presidential candidates like Ted Cruz and Carly Fiorina “for months… have spread heinous lies about Planned Parenthood,” said Laura Leavitt, campaign manager at the Courage Campaign. “And now, the same anti-choice, anti-woman rightwing extremists who sparked these violent attacks are pretending they had nothing to do with it.”

The campaign is also releasing a televised ad depicting the decades of violence women, doctors, and clinics have faced since 1977.

“People are dying, clinics are burning—and only a domestic terrorism investigation can help us find out who is driving this violence,” Thomas said.

Watch the ad below: