The corporately-owned media may not like Bernie’s anti-establishment views but for the sake of American democracy they must allow for a fair debate in this presidential campaign.’ 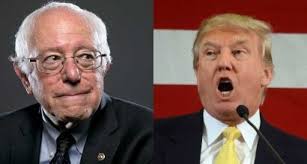 The latest survey comes on the heels of an analysis by the Tyndall Report which that showed that media coverage of Donald Trump eclipses that of all his rivals from both parties.

According to the study of nightly news programs on NBC, CBS and ABC, Trump has received more network coverage than all the Democratic candidates combined and accounts for 27 percent of all campaign coverage thus far.

What’s more, there appears to be a concerted “blackout” of news about Bernie Sanders, despite similar voter support.

In fact, ABC World News Tonight devoted a total 81 minutes this year to Donald Trump’s campaign and just about 20 seconds to Sanders’ candidacy—a ratio of 81:1 which Boehlert calls a “stunning revelation.”This comes despite the fact that a recent poll found that Sanders would beat Trump by eight points in the general election.

In a campaign statement, Sanders’ campaign manager Jeff Weavers said that media channels were ignoring the progressive candidate because his campaign is an affront to the corporate-dominated system.

“The corporately-owned media may not like Bernie’s anti-establishment views but for the sake of American democracy they must allow for a fair debate in this presidential campaign,” Weavers said. “Bernie must receive the same level of coverage on the nightly news as other leading candidates.”

The campaign has even begun a petition calling on corporate-owned channels to “start covering Bernie.”

Commenting on the stark divide on Sunday, columnist Juan Cole suggests that with Trump’s anti-Muslim and anti-immigrant messaging propelling some followers to take drastic action, the corporate media may be posing a “danger to society.”

What better for corporate news. You pretend there isn’t a candidate in the race addressing growing economic inequality or the woes of the working class. You put all the spotlight on someone who insults and even incites against Mexican-Americans, African-Americans and Muslim-Americans. It is a tried and true tactic of the American business class to keep the workers and middle class divided by playing up minor ethnic issues.  The end result, however, is fire-bombing of mosques and attacks on minorities and other white hood phenomena familiar from past epochs of American history.

For his part, the Senator from Vermont continues to lead Democratic frontrunner Hillary Clinton in New Hampshire with 50 percent of likely Democratic voters in the state, compared with her 40 percent, according to the latest CNN/WMUR tally. Meanwhile, a Fox News survey released on Sunday found Clinton beats Sanders in Iowa 50 to 36 percent.