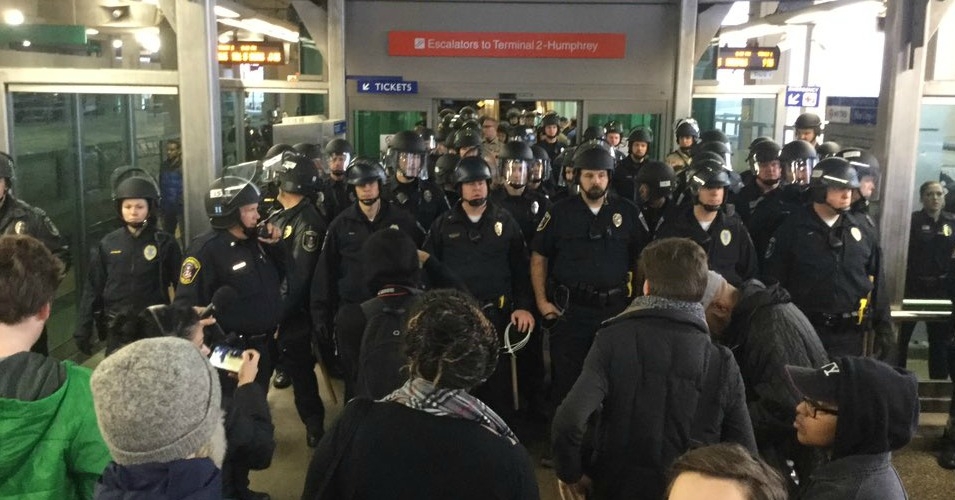 After police at the mall threatened to arrest hundreds of peaceful protesters, Black Lives Matter activists moved their demonstration to nearby light rail trains and the Minneapolis-St. Paul International Airport, according to local news outlets.

After warnings from the mall that they would be arrested, the protesters took Metro Transit’s Blue Line to the airport’s Terminal 2 (Humphrey), filling a stairwell outside the terminal, but blocked from entering by police. Other protesters arrived at Terminal 1 (Lindbergh), stopping traffic and joining hands as they chanted “black lives, they matter here.”

At the mall, the Twin Cities’ largest retail center, the protest shut down some stores near the east rotunda for about an hour and a half. At the entrance to the mall, posters were plastered to doors, informing visitors that the mall is private property and protests are strictly prohibited, and a big video screen in the rotunda warned participants to leave or be arrested. Security staff searched visitors’ bags and handed out cards letting visitors know the mall would be checking bags and other items at all entrances as part of ongoing security procedures. And police from metro area departments and about 30 State Patrol officers gathered.

About 100 people started to gather in the east atrium of the mall, one of the largest in North America, around 1:30 p.m. (1830 GMT), despite a judge’s warning that the property’s owners could legally block the protest, organized by the Black Lives Matter movement.

Police and mall security quickly moved in, warning any who did not leave they would be arrested for violating mall policy against demonstrations and alerting shoppers that that area of the mall was on lockdown. Police took one man into custody and forced people in the protest area outside into a light snow.

The protest took place despite the Mall of America’s attempts to shut it down. While a judge did bar three organizers from attending, she also said she doesn’t have the power to prevent others from showing up.

“We are a leader-full organization,” Kandace Montgomery, one of the organizers barred by the judge’s order, told the Associated Press. “Just barring three of us does not mean that you’ve stopped our work.”

Demonstrators are calling attention to the November police killing of 24-year-old Minneapolis black man Jamar Clark, who was unarmed when he was shot, as well as to racial injustice in Minnesota and across the country.

“Black Xmas is here and there will be no business as usual until we get accountability for our dead, and justice for the living,” reads a statement from the national Black Lives Matter Movement recognizing ‘Black Xmas’ efforts in Minneapolis, Los Angeles, New York, Washington D.C., Chicago, and the San Francisco Bay area.

“Instead of buying gifts to fuel this system, Black Xmas is a day of action to reject the degradation of Black families and communities by police, politicians, and predatory companies, and declare our inherent worth,” the statement continues. “We will disrupt business as usual until city, state, and federal budgets stop funding Black death and start funding Black futures.”

Follow on social media under the hashtags #BlackXmas or #BlackXmas2.