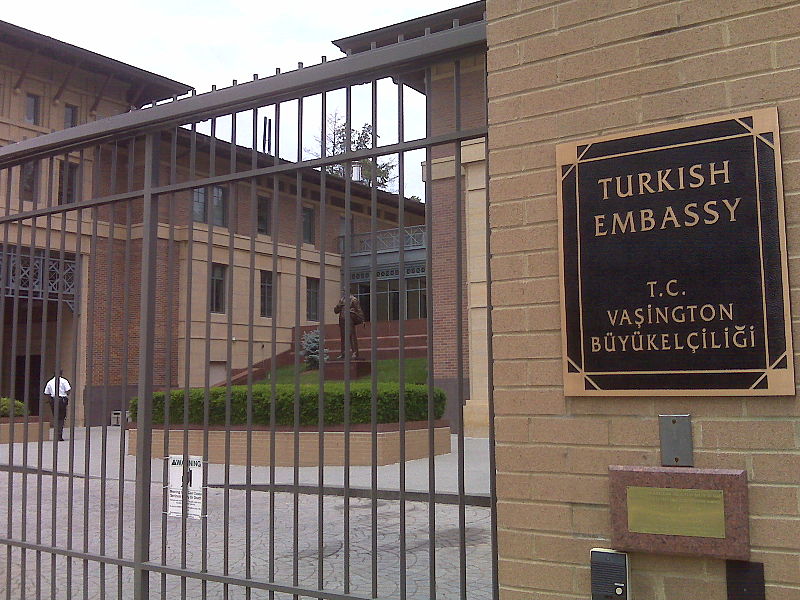 Turkish Embassy in Washington DC, about to be visited by local Kurds and their supporters. Photo by Brian Johnson & Dane Kantner (originally posted to Flickr as Turkish Embassy) [CC BY-SA 2.0], via Wikimedia Commons

Why is President Obama silent over brazen human rights violations in Turkey?

Will America turn a blind eye to the shelling of Kurdish civilians by Ankara?

America supplies the Turkish state with weapons to murder Kurds, the only group that has bravely fought and defeated the West-hating Islamic State cutthroats.

This American policy of apathy stands logic on its head, and makes a mockery of common sense.

Basic human decency cries out against such blatant injustice!

Kurds have not attacked Turkey.  We only want what Abraham Lincoln justly hailed: “Self-government is better than good government.”

Kurds have never had a legitimate, let alone good, government under the Turks, and are now saying: mind your manners or else you are not welcome in our neighborhoods and cities.

Kurds share a country with the Turks—Turkey, which is fast becoming like Syria, an exporter of refugees and a brutal workshop for radical Islamists.

Kurds want to be a credit to the human race, and help Turkey turn into something like the old state of Czechoslovakia—a country that did not discriminate among the Czechs and the Slovaks at its birth and allowed their peaceful separation in 1993.

Kurds know that war is like an earthquake, and should be avoided at all costs—and if it has to be waged, it should only be done in self-defense, as Kurds are doing against Islamic State and Turkey now.

Kurds are horrified by news accounts of a 10 year-old Kurdish girl, Cemile Cagirga, murdered on the steps of her home by a Turkish sniper on September 7, 2015.  The Turkish lockdown of her city heartlessly forced her mother to keep her child’s decomposing body in the freezer till the authorities allowed her to bury her child five days later.

Kurds are shocked to see on homemade videos that a three month-old Kurdish baby, Miray Ince, was shot in the face by another Turkish sniper in Silopi.  When the child’s 80 year-old grandfather tried to rush her to the hospital, he too was shot dead.

The Ince family is still waiting to bury two generations in one day.

Kurds hate waking up on a Sunday morning to learn that a 38 year-old Kurdish woman, Melek Apaydin, sat down for breakfast in her home on Sunday, January 3, 2016—only have a shell from a Turkish tank blast her brains all over her living room.

Six thousand miles separate us from this gore and madness and yet as diaspora Kurds we are expected to sleep through it every night and report to work every morning as if it were business as usual.

It is not. Our loved ones can tell you that we can’t sleep at night, and can hardly make it through the day, wondering if peace with liberty will ever grace our lands again!

Unfortunately, Turkey is waging merciless war against the Kurds.

And yet, we come here in peace, ready to undergo suffering to make up for America’s sin of indifference towards this humanitarian crisis and Turkey’s sin of intransigence towards our immediate relatives.

He also urged America to seek peace with Vietnam, as we are asking Turkey to do in Kurdistan.

We don’t claim to know how God works out these things.

We want the world to know that we will continue on the same road of nonviolence with Dr. King till death or victory comes our way.

To the Turks who are working in the embassy behind us, you can put an end to our presence here by urging your government to stop waging war on our loved ones, and lift the shroud of death hanging over our cities.

To the Kurds living in America, you can join our vigil.

To the Kurds living in other countries that respect the rule of law, you can ignite similar protests—until the world is aflame with our bold cry for justice.

To the Americans who are here or will see this statement of ours on the Internet, you can remain true to your noblest ideals—such as when your bravery buoyed Dr. King and crowned blacks with justice in America.

“He who accepts evil without protesting against it is really cooperating with it,” Dr. King declared.

American support for Kurdish justice, with the same vigor given Dr. King, can spark brushfires of freedom that will light up the world with courageous cries for freedom in Turkey and Kurdistan!

About the Author:
Kani Xulam is the Founder and Director of the American-Kurdish Information Network, an educational organization based in Washington, DC. He was featured in the 2010 Kevin McKiernan award-winning documentary, “Good Kurds, Bad Kurds.”