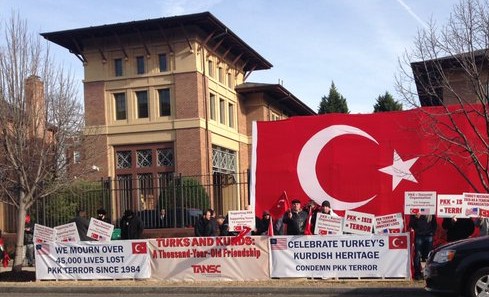 Supporters of Turkey’s position take aim at the Kurdish Vigil across the street in Washington, DC. Image via Twitter.

As news unfolds of the growing human rights crisis in Turkey, the response has been to project the views of the regime and dictatorship of President Recep Tayyip Erdogan to nations even within their NATO alliances.

Most recently, the Turkish Embassy in Washington, DC has taken aim at an organization holding a Vigil for King’s Dream in Kurdistan across the street from the embassy. On January 15, the Vigil began after realizing that during the previous evening, the embassy had hoisted a ostentatious flag and several banners repeating mistruths about Kurdish issues.

A native of Kurdistan, Kani Xulam is a commentator on the history and politics of Kurdistan, and advocates for the right of the Kurdish people to self-determination. He is the director of the American-Kurdish Information Network, and is involved in the Vigil in Washington.

Xulam stated the reasons for A Vigil for King’s Dream in Kurdistan clearly in a statement published prior to the beginning of the event. His subsequent announcement was featured in an article, Is America’s Best Muslim Friend In the Middle East Being Crushed? The group is using the hashtags #KurdsHonorDrKing and #TwitterKurds.

Within Turkey, access to news has been controlled by the government. Any website or other social platform presenting views other than that of Erdogan’s is being blocked. Journalists attempting to cover the stories of the atrocities, human rights violations, indiscriminate killings and sieges and curfews on entire neighborhoods are being arrested, detained, tortured, and, in some cases killed.

What Turkey wants is for the international community to begin identifying all Kurds within their borders as associated with any organization labeled by the Turkish government as a terrorist group. If this goal can be accomplished, Turkey will achieve the dream of Erdogan to secure his life-long dictatorship over his country by perpetrating a mass genocide on the millions of Kurds residing within Turkey’s borders and will expect the world to look away as he claims they were protecting their nation.

There has never been a question of Turkey’s undeclared support and backing of the terrorists groups such as Daesh (IS). During the siege of Kobani a little more than a year ago, the military sat on the Turkish border and refused to allow Kurdish persons to cross to help defend the Syrian town. Meanwhile, evidence surfaced proving ISIS militants were allowed to cross at free will, bringing supplies, weaponry and additional fighters with them.

For years, those wishing to join the fight Daesh is waging across the Middle East have routed their access through Turkey. It has been documented in multiple credible news sources that ISIL fighters traveled through Turkey on their way to join the terrorist group. It was not until Daesh began attacking within the country of Turkey that access became more difficult, and yet it remains possible to this day.

Most Americans remain uninformed about news out of Turkey. It is seldom covered in US news media outlets, and usually only occurs when sensational headlines are associated. But more Americans need to pay attention, because their tax dollar is being used to commit these violations and atrocities within Turkey against an innocent civilian population.

President Barak Obama recently appealed to Americans to support his executive orders to remove loopholes in background checks for gun purchases in the US. During this speech, he remarked that we can no longer allow our children to be innocent victims of the senseless violence taking place in communities across America.

We must ask what difference there is in American children here and Kurdish children in Turkey, that the man who would say this can continue to approve and sign that which is needed for the US military industrial complex to continue to sell and ship weaponry and ammunition to a country that is using that weaponry against the children in their own country.

It is said that those who do not study history are doomed to repeat it. Humanity has seen this kind of treatment toward an ethnic group in the past, and each time we recoil in horror and swear we must never allow this to happen again. And now it IS happening again.

Anyone with a heart and soul that values humanity must take action and support all efforts to make the world aware before it is too late once again.

If you are reading this and can not physically join the Vigil that is currently taking place in Washington, DC across from the Turkish Embassy, you at least can share this and other news with any and all people that still have a beating heart within their chest.