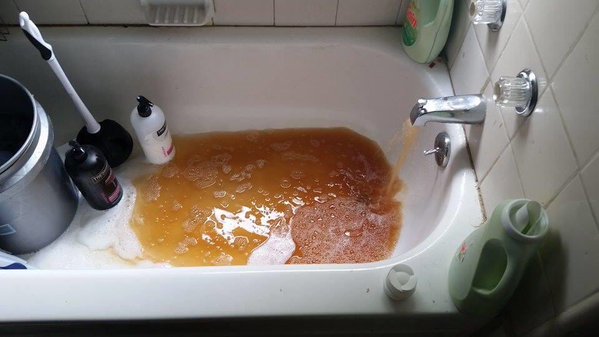 Experts are voicing strong disagreement with Michigan Gov. Rick Snyder, who on Friday tried to argue that the lead poisoning plaguing the water of the majority-black city of Flint was “absolutely not” a case of environmental racism.

The Republican governor made the comment in an interview with MSNBC, adding that he’s “been devoted to helping” the city.

But that’s quite different from the way Paul Mohai, a professor at the University of Michigan in Ann Arbor, whose work focuses on racial and socioeconomic factors in pollution, see it.

Mohai told the Associated Press that the disaster in Flint “may be one of the biggest environmental justice disasters we’ve seen in a long time.”

Nor is Snyder’s take shared by the man known as the father of environmental justice, Dr. Bob Bullard.

Bullard, Dean in the School of Public Affairs at Texas Southern University, writes Friday, “What happened in Flint is a blatant example of environmental injustice.”

“State regulators and the U.S. Environmental Protection Agency (EPA) regional office in Chicago would have acted differently if this water crisis had taken place in a white suburb of Detroit,” he wrote.

“In studying the history of environmental justice, you see over and over that it generally takes longer for poor communities to be heard when they make complaints. Government officials received complaints in April 2014 expressing that something was wrong with the water in Flint. If regulators at the Michigan Department of Environmental Quality had had to drink that water, or serve it to their children, their response would have been different,” he added.

And then there’s the take from filmmaker and Flint native Michael Moore: “Let me not mince words: This is a racial crime.

“Everybody knows that this would not have happened in predominantly white Michigan cities like West Bloomfield, or Grosse Pointe, or Ann Arbor,” Moore writes. “Everybody knows that if there had been two years of taxpayer complaints, and then a year of warnings from scientists and doctors, this would have been fixed in those towns.”

Snyder’s comments on MSNBC come on the heels of the resignation of the Environmental Protection Agency’s regional administrator for Flint over her role in the disaster, and the release of redacted emails by Snyder showing that his administration was informed of problems with Flint’s water months before he or or his staff admitted to bearing any responsibility for it.

Meanwhile, the people of Flint hear repeated apologies from Snyder, even as they face potential shutoffs for water that isn’t even safe to drink.

And public health experts, like Andrew Subica, assistant professor of social medicine and population health at UC Riverside, are warning: “Unfortunately, research suggests this water crisis is not an isolated incident of poor public policies endangering the health of residents living in economically distressed communities.”

Indeed, reporting over recent days indicates that “lead exposure is a pervasive issue in the United States,” as Sarah Frostenson wrote for Vox this week.

While 21 states do not regularly submit data to the Centers for Disease Control on lead surveillance programs in their states—because they are not required to do so—nine counties nationwide told the CDC in 2014 that 10 percent or more of their lead poisoning tests came back positive. Four of them are in Louisiana, two in Alabama, and the rest scattered across West Virginia, Kentucky, Indiana, and Oklahoma.

As Frostenson noted, “[t]hese are places that have told the federal government they actually have higher rates of lead poisoning than Flint, where officials say the number hovers around 4 percent. But these aren’t places we talk about that much.”

Furthermore, she wrote, “a 2013 study from the CDC found that lead exposure impacts black communities disproportionately to their white counterparts.”

Meanwhile, exclusive reporting by the Guardian on Friday suggests that “[w]ater authorities across the US are systematically distorting water tests to downplay the amount of lead in samples, risking a dangerous spread of the toxic water crisis that has gripped Flint.”

Documents seen by the paper “show a pattern of behavior in addressing public health concerns about water across the US where ‘gamed’ tests help ensure that water utilities don’t breach federal lead and copper rules,” wrote journalist Oliver Milman.

“There is no way that Flint is a one-off,” Dr. Yanna Lambrinidou, a Virginia Tech academic, told the Guardian. “There are many ways to game the system. In Flint, they went to test neighborhoods where they knew didn’t have a problem. You can also flush the water to get rid of the lead. If you flush it before sampling, the problem will go away.

“The EPA has completely turned its gaze away from this,” Lambrinidou said. “There is no robust oversight here, the only oversight is from the people getting hurt. Families who get hurt, such as in Flint, are the overseers. It’s an horrendous situation. The system is absolutely failing.”