Every four years, we vote for who we feel would be the best person to lead our country. Two months after the election, the new (or returning, if re-elected) president takes the oath of office: 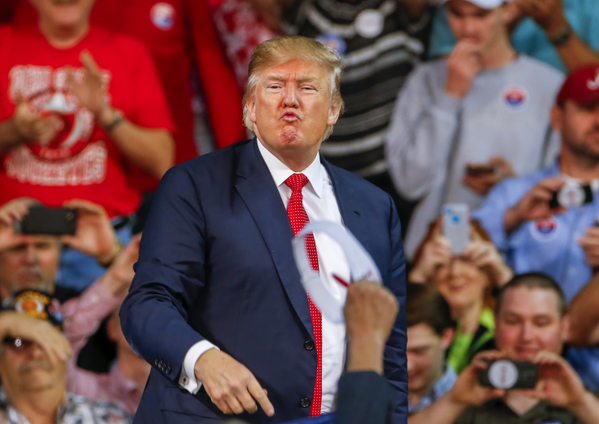 Donald Trump is the leading candidate for one of the two major parties, so we wondered how Donald would “preserve, protect and defend” the Constitution. We didn’t have to look to far to find troubling inconsistencies.

Trump started his campaign off with a bang, calling Mexicans “thugs” and “rapists,” and said he was going to end birthright citizenship. When Bill O’Reilly pointed out to him that such a move violated the 14th Amendment, which states ” All persons born or naturalized in the United States, and subject to the jurisdiction thereof, are citizens of the United States and of the State wherein they reside…”, Trump’s response was that the 14th Amendment itself is unconstitutional.  He also says he wants to deport all the eleven million undocumented people in the US. How he plans on possibly doing this without violating the 4th Amendment is confusing to us. But, we digress…

Then, we have his statements about Muslims. He wants to ban all Muslims entering the United States. While this is on shaky legal ground, it could be legal, provided he doesn’t include Muslims who live in the US re-entering the country. However, his other proposals definitely aren’t. He proposed requiring all Muslims in the country to register with the government, and creating a database from that information. By singling out a specific religion being required to register, this is definitely against the 1st Amendment’s Free Exercise Clause. He also proposes putting mosques under surveillance; a violation of both the 1st and 4th Amendments.

Last week, he said that if he was elected president, he’d toughen the libel laws. This would be another direct assault on the 1st Amendment and freedom of the press, as the way the law sits now, public figures must prove that any defamatory statements were made with “actual malice,” Under Trump’s proposal, basically any negative statement about him could be challenged in the courts by his administration.

There’s also pesky details that he overlooks. When he says that he’s unilaterally going to renegotiate the Iran deal or NAFTA, he overlooks the fact that while he can renegotiate or threaten to break agreements all he wants, he’ll still need congressional approval to do so. In fact, with most of Trump’s proposals, he fails to recognize that he’s only one of the three branches of government, and that what he says he’s going to do can’t be done without at least one of the other branches’ approval. And, make no mistake about it, a President Trump would face stiff opposition in both Congress and the Supreme Court.

So, would a President Trump remain true to his oath of office? From what we’ve seen so far, we’d have to say no; he’d break his oath numerous times within his first month.

Hopefully, we’ll never have to find out…