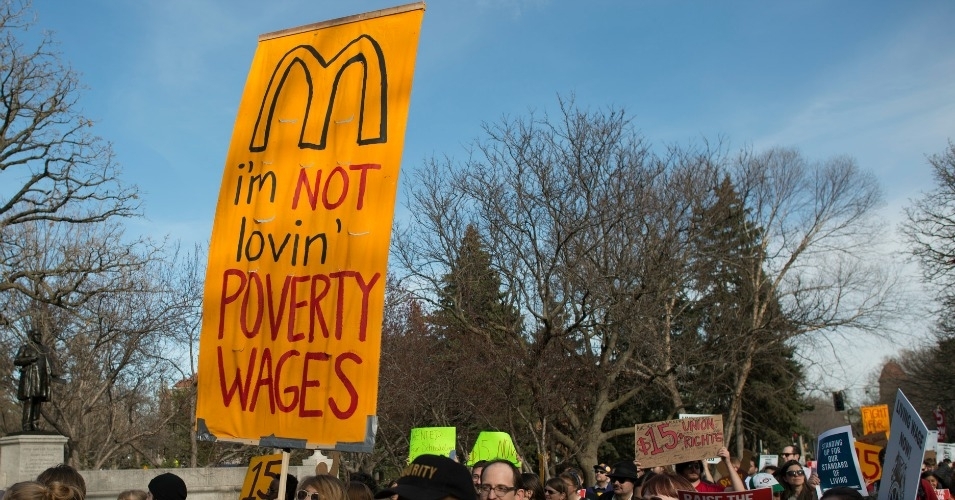 It stands to “not only expose McDonald’s to massive liability, but also open the door for workers at McDonald’s franchises across the country to form a union that would negotiate directly with corporate headquarters, rather than each individual franchisee,” explained Post reporter Lydia DePillis. “And although the verdict will be specific to the Golden Arches, it likely will have a bearing on the rights of workers at thousands of other franchises as well.”

About 90 percent of McDonald’s U.S. restaurants are franchised locations.

In his opening statement, NLRB lawyer Jamie Rucker described the level of control McDonald’s has over its franchisees, setting everything from cleaning requirements and the number of seconds for order-taking to pre-packaged interview questions for prospective hires.

“If McDonald’s is involved in determining working conditions at its franchised operations, it is responsible for what happens to workers subject to those conditions,” Rucker said.

The proceedings come nearly two years after the NLRB’s general counsel determined that McDonald’s could be held jointly liable with franchise operators who were accused of retaliating against employees who participated in strikes demanding better working conditions and a $15-an-hour minimum wage.

As Common Dreams reported at the time, the joint-employer classification was a “New York big deal” to labor activists, as it struck a blow to previous efforts by McDonald’s to dodge liability for how its restaurants treat workers.

Indeed, Eater writes, “McDonald’s has tried everything it can to reverse that decision.”

Another NLRB ruling last year further expanded the joint-employer standard, and was seen as laying the groundwork for fast-food corporations to be held accountable for the rights of workers at franchised stores. The Chicago Tribune explained: “Under the former standard, a company was considered a joint employer if it had direct and immediate control over working conditions. Under the new standard, a company is a joint employer if it exercises indirect control over working conditions or reserves the authority to do so.”

And McDonald’s clearly fits that bill, said Fight for $15 organizing director Kendall Fells at the time.

“McDonald’s is the boss—that’s true by any standard,” Fells said. “The company controls everything from the speed of the drive-thru to the way workers fold customers’ bags. It’s common sense that McDonald’s should be held accountable for the rights of workers at its franchised stores.”