‘The best way to fight the demagogues in Europe who are currently profiting from the chaos in the Aegean is not to indulge their disregard for international law, but to offer sustainable, principled solutions. 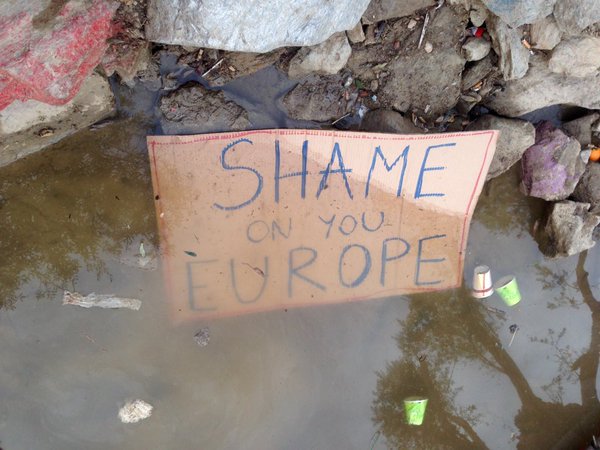 As European Union ministers in Brussels on Friday accepted a controversial plan described as a direct assault on the “very principle of international protection for those fleeing war and persecution,” advocates for refugees and human rights condemned not only the deal’s specifics but the deplorable deterioration of values it represents.

“The deal with Turkey has been approved,” tweeted Bohuslav Sobotka, the Prime Minister of the Czech Republic, from inside the meeting of 28 European leaders. “All illegal migrants who reach Greece from Turkey starting on 20 March will be returned.”

As Bloomberg TV reported just after the news broke in Brussels:

Though the final details of the agreement were not fully formed until private negotiations ended earlier in the day, the basics of the deal put forth by the German government of Chancellor Angela Merkel, known since last week, would create a framework in which Turkey would receive financial aid and political accommodations in exchange for taking back any refugees turned away from Greece or trying to cross the Aegean Sea. For every Syrian refugee sent back, according to the blueprint which received mixed endorsements from other EU nations last week, another Syrian would be resettled in the EU directly from refugee camps in Turkey.

Nick Dearden, the director of the campaign organization Global Justice Now, voiced his displeasure by tweeting, “EU-Turkey deal is a shameful moment for Europe.”

Critics of the deal were immediately responding on Twitter under the hashtag #StoptheDeal.

On Friday morning, a group of protesters in Greece climbed the Acropolis and dropped two large banners demanding a more humane approach for refugees and migrants. “Open Borders,” read one. And “Safe Passage – Stop Wars,” read the other. 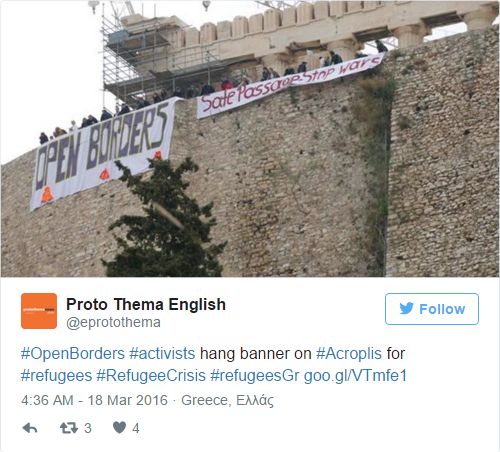 The paraphrased argument of critics, according to the Washington Post, is that the current deal under consideration in Brussels amounts to an “immoral and potentially illegal solution that would corral refugees in Turkey, a nation plunging deeper into instability and violence.”

Amnesty International—which has been staging a running protest in Brussels throughout the week under the banner “Don’t Trade Refugees”—demanded governments reject the proposed deal outright and said that Turkey cannot be viewed as a “safe” country for refugees given the current situation of those already there, the increasing concerns about the Turkish government’s human rights record, and the ever-increasing descent into authoritarianism by President Recep Tayyip Erdoğan.

“The breach of the right to seek asylum is not mitigated by the fiction that Turkey is a ‘safe’ country for refugees,” wrote members of Amnesty’s leadership in a statement on Thursday. “Turkey has granted ‘temporary protection’ to more than two million Syrians, but it still refuses effective protection in practice to non-Europeans including Afghans, Iraqis and others applying for it. Turkey has also repeatedly pushed Syrians back into the war zone and closed borders to others seeking to flee.”

Making matters worse, the statement continued, “Turkey’s president and government have embarked on an intense crackdown on human rights. The breakdown of the Kurdish peace process and extended security operations in the south east, along with nationwide repression of critics, political opposition and media perceived as hostile to the government, may soon add Turkish nationals to the refugee flows.”

In a separate statement, Selmin Calıskan, general secretary of Amnesty International in Germany, called the deal both “inhumane and illegal.”

Global Justice Now’s Dearden said that what is often called the “migrant crisis” is actually “a crisis of global injustice caused by war, poverty and inequality” — one in which the world’s most desperate and vulnerable people are being treated like tradable goods by European governments.

“The deal that the EU is striking with Turkey means that the EU is effectively outsourcing its human rights responsibilities to a brutal regime. The abandonment of any pretense of the EU’s principles means that we are now being blackmailed by Turkey, whose government every day embraces a little more authoritarianism while brutally attacking its Kurdish population,” said Dearden earlier this week.

Dearden’s group is among those campaigning against the deal put forward by Merkel while calling instead for a transformation of global immigration policy which would embrace the free movement of people, reduce global inequality, and address the root problems of displacement and poverty caused by wars, climate change, and food insecurity. According to Dearden, the deal exposes the grand hypocrisy of the EU which claims to represent the world’s brightest beacon of democracy and humanitarianism, but has gone markedly backward on those promises in recent years.

“To demonize those making a rational choice on the part of themselves, their family and their community, obscures the truth. Migration is bringing those of us in Europe face to face with the reality of the world our leaders have constructed,” he argued. “We are told that the principles of free movement, solidarity between members and respect of human rights are at the foundation of the EU. Tell that to Greece, which has been forced into indefinite depression and is now being turned into prison camp, with borders erected around it, and teargas being fired at asylum seekers trying to leave.”

As those writing on behalf of Amnesty concluded, “The best way to fight the demagogues in Europe who are currently profiting from the chaos in the Aegean is not to indulge their disregard for international law, but to offer sustainable, principled solutions. These exist. The flow of boats can be substantially eased by expanding resettlement directly from countries of first refuge to reduce the need to board a boat, investing in those countries so refugees can lead a dignified life there, and redoubling efforts to stop the atrocities in places like Syria that drive the refugees to flee in the first place.”