“The Native and the Refugee” documentary project explores the similarities between the struggles and experiences of Native Americans and Palestinians.

By Matt Peterson and Malek Rasamny. Published 4-12-2015 by ROAR Magazine 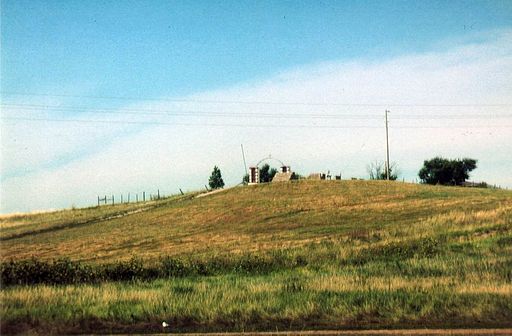 Wounded Knee, Pine Ridge Reservation, South Dakota. Entrance gate to cemetery; the location of the Hotchkiss gun used during Wounded Knee Massacre and later a mass grave for the victims. Photo: Napa (Own work) [CC-BY-SA-3.0 or CC BY 2.5], via Wikimedia Commons

In December 2014, we visited the Pine Ridge Indian Reservation in what is now South Dakota. We chose to begin our project at the archetypal site of struggle for land, sovereignty and autonomy among natives in the United States. It was the Lakota people, including warriors Sitting Bull and Crazy Horse, who put up some of the most historic fights against the US military forces in the nation’s expansion westward.

In the 1876-1877 Black Hills War, the US intervened militarily on behalf of settlers searching for gold in the Lakota’s most sacred site, now known as the Wind Cave National Park. It was in this context that the Battle of Little Bighorn took place, when the Lakota famously defeated George Armstrong Custer’s Battalion of the 7th Cavalry. Pine Ridge was later the site of the 1890 Wounded Knee massacre, in which that same 7th Cavalry killed hundreds of Lakota in its struggle to disarm and forcibly relocate them to the Pine Ridge Indian Reservation.

In 1973, Wounded Knee was the site of a 4-month standoff and occupation organized by the American Indian Movement (AIM) against both the federal government and local tribal council. In 1975, two federal agents were killed in a shootout at Pine Ridge, for which AIM member Leonard Peltier remains held as a prisoner at the US Penitentiary Coleman in Florida. To add insult to injury, the presidential monument Mount Rushmore currently stands within what’s called the Black Hills National Forest.

The traditional Lakota territory includes parts of North and South Dakota, Nebraska, Montana and Wyoming. The Lakota historically were a semi-nomadic tribe that would follow herds of buffalo for food. In order to force them onto reservations, the US military encouraged the wholesale slaughter of buffalo in the Great Plains, resulting in their almost complete extinction.

It was through the destruction of their food supply — and not through any victories in battle — that the United States was able to force the Lakota into a position of economic subservience and dependence. Through a series of treaty violations, the borders of “Great Sioux Reservation” declared by the 1851 Fort Laramie Treaty were reduced to the present situation in which the Lakota are now spread out over a number of non-contiguous reservations including Pine Ridge, Rosebud, Cheyenne River, Standing Rock and Crow Creek.*

The current unemployment rate on Pine Ridge is between 80-90%, and life expectancy is 50 years. Despite being one of the poorest areas on the continent, the Lakota refuse to accept a 1980 government settlement now totalling $1.3 billion in compensation for the theft of the Black Hills. They insist that no amount of money can be exchanged for the return of their sacred land to its rightful inhabitants. They are currently leading the resistance against TransCanada’s proposed Keystone Pipeline, which would be built directly through Lakota territory.

The histories and particularities of the Native American and Palestinian struggles are indeed quite different, but what they share is the experience of settlers moving to take over and control their traditional lands, later assisted by a military force which facilitated and justified the resulting displacement. The reservation and the refugee camp then become the essential sites to locate this history, identity, and struggle for land and sovereignty.

We met with veteran members of the American Indian Movement, and Owe Aku, Bring Back the Way to hear about the present situation on Pine Ridge, and to discuss their horizon for autonomy.

* For an in-depth account of the Lakota’s struggles to maintain control of its land over the last 200 years, read Roxanne Dunbar-Ortiz’s An Indigenous Peoples’ History of the United States (2014, pp. 186-191).

Matt Peterson’s films and videos have screened at Anthology Film Archives, Eyebeam, the Film Society of Lincoln Center, International House Philadelphia, Millennium Film Workshop, MoMA PS1, and at scattered microcinemas and universities across North America and Europe. In 2014 he completed feature film on the Tunisian insurrection, Scenes from a Revolt Sustained, with a production grant from the Doha Film Institute.

Malek Rasamny is a researcher and artist based in both New York and Beirut. His writings on film have been featured in the Daily Star, the largest English language daily newspaper in the Middle East, and he was interviewed by the Canadian arts magazine FUSE about his work in Red Channels.