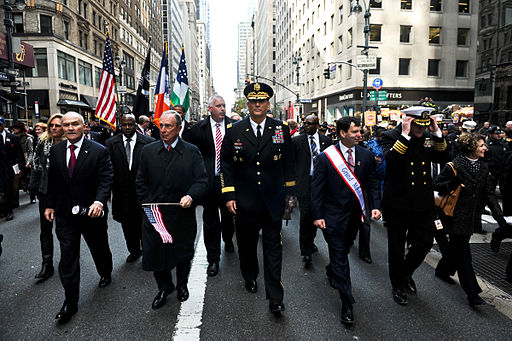 BALTIMORE—When Rory Fanning, a burly veteran who served in the 2nd Army Ranger Battalion and was deployed in Afghanistan in 2002 and 2004, appeared at the Donald Trump rally in Chicago last month he was wearing the top half of his combat fatigues. As he moved through the crowd, dozens of Trump supporters shouted greetings such as “Welcome home, brother” and “Thank you for your service.” Then came the protest that shut down the rally. Fanning, one of the demonstrators, pulled out a flag that read “Vets Against Racism, War and Empire.”

Click here to see a YouTube video of Rory Fanning being ejected from a Donald Trump rally. During the incident he was doused with a drink and struck.

“Immediately someone threw a drink on me,” he said when I interviewed him on my teleSUR show, “Days of Revolt.” “I got hit from behind in the head three or four times. It was quite the switch, quite the pivot on me. Questioning the narrative, questioning Donald Trump’s narrative, and I was suddenly out of their good graces.”

Nationalists do not venerate veterans. They venerate veterans who read from the approved patriotic script. America is the greatest and most powerful country on earth. Those we fight are depraved barbarians. Our enemies deserve death. God is on our side. Victory is assured. Our soldiers and Marines are heroes. Deviate from this cant, no matter how many military tours you may have served, and you become despicable. The vaunted patriotism of the right wing is about self-worship. It is a raw lust for violence. It is blind subservience to the state. And it works to censor the reality of war.

“A lot of soldiers who’ve come back from war see themselves as anything but a hero,” Fanning said. “To throw that term around loosely is dangerous. It’s a way to manipulate soldiers. It buys their silence.”

“Soldiers are not encouraged to talk about the realities of war when they come back,” he said. “They’re labeled a hero or warrior. That’s a major problem. It leads to further seclusion, isolation with soldiers. We talk about the suicide rates amongst veterans—22 a day. It’s because we’re not allowed to talk about what we saw overseas, how unjust it was, how we feel like bullies. How many innocent people have been killed since 9/11? Throwing out words like ‘heroes’ does a disservice to the experience of veterans and all the innocent people that have been killed since then.”

War, up close, bears no relation to the myth. It is depraved and cruel. It has nothing to do with noble ends or justice. Killing is a dirty, ugly business. There is a vast disparity between war’s reality and the myth peddled by the press, the entertainment industry, politicians and churches.

“What I didn’t know as I entered [Afghanistan] with the 2nd Army Ranger Battalion was that the Taliban had essentially surrendered after the initial assault by the Air Force and the special forces,” Fanning said of his first tour, which started in late 2001. “Our job was essentially to draw the Taliban back into the fight. Surrender wasn’t good enough for politicians after 9/11. We wanted blood. We wanted a head count. It really didn’t matter who it was. So we’d walk up to people, people who had been occupied … , involved in civil war before that, with tons of money at our disposal. We’d said, ‘Hey, we will give you this amount of money if you point out a member of the Taliban.’ An Afghan would say, ‘Sure, absolutely. There’s a member right there.’ So we go next door. We’d land in their neighbor’s front yard, put a bag over every military-aged person’s head, whether they were a member of the Taliban or not, give the person who identified that person money. Then that person would also get that neighbor’s property. In a country with as much desperation and poverty as Afghanistan you’d do anything to put money or food on your family’s table. Essentially that’s what we were doing. But we were also bringing people who had absolutely no stake in the fight into the war. We were creating enemies.

“I signed up after 9/11 to prevent another 9/11 from happening,” he went on. “But soon after arriving in Afghanistan I realized I was only creating the conditions for more terrorist attacks. It was a hard pill to swallow. We were essentially bullies.”

The disproportionate use of force on the part of the American occupation forces not only left huge numbers of civilians dead but served as a potent recruiting weapon for insurgents.

“We’d have a rocket land in our camp,” said Fanning, who is a member of Veterans for Peace and the author of “Worth Fighting For: An Army Ranger’s Journey Out of the Military and Across America.” “We wouldn’t necessarily know where it came from. It came from that general direction over there. We’d call in a 500-pound bomb. It would land on a village.”

Michael Hanes was in the Marine Corps from 1994 to 2004. He was in Iraq in 2003 in the most senior recon platoon—the Marine Corps equivalent of the Navy SEALs—the 1st Force Reconnaissance Company, 1st Marine Division. He was in numerous raids. Now he is a member of Veterans for Peace, and I interviewed him with Fanning for my show.

“I was in the Iraq invasion,” Hanes said. “We pushed up into Baghdad and things [became] very real for me when we began to kick in doors, place charges in doors and rush into these homes and terrorize these people.”

“Probably about 50 percent or more of the intel that we got was just dead wrong,” he went on. “Busting in these doors you come into a family’s house and there’s elderly women, young little girls, 3, 4 years old, just screaming and horrific, just terrified to where they literally soil themselves. They pee their pants. You’re taking Grandma and throwing her up against the wall and interrogating her. That hits you right here. It hits you really hard. I began to ask myself, what the hell am I doing? If you happen to be a young man [in a raided home], in your early 20s or anywhere in that range where you can carry a weapon, then by mere association of being a young male, a possible insurgent, [Fedayeen Saddam] loyalist, whatever the case may be, you were taken out of the home to be interrogated. Who knows what happened to them. … I know [Marines] were there all night interrogating them. Who knows if they even made it back to their family.

“With the drone attacks you have a range, an outside range, where so many civilians are being killed,” Hanes said. “It’s a terrorist-producing factory. If you lose your child, if you lose your mother, any of your family members to this … we have to think about that. Put yourself in that position. If I lost my child I would be desperate. What would you do? It’s easy to understand why someone would strap a bomb to themselves and blow themselves up.”

The physical brutality and violence are accompanied by the overt racism that is characteristic of military occupations.

“We didn’t refer to the people in Afghanistan as Afghans, they’re hajji,” Fanning said. “This is a term of respect for someone who’s gone to make the trip to Mecca, but we’d use it in a derogatory term.”

“The terms ‘sand nigger,’ ‘hajji,’ ‘barbarian,’ ‘terrorist,’ all of these things were thrown around as if the people there were subhuman,” Hanes added.

The lies of the state and the wider society became painfully apparent.

“We’re sold the idea of—we’re going to liberate people, we’re fighting terrorism. Then we realize we’re the ones terrorizing people,” Hanes said. “That torments you psychologically. I’ve lost a few friends to suicide.”

The two veterans say they have found solace in acts of civil disobedience. Hanes has been arrested with other members of Veterans for Peace protesting the U.S. bases in Okinawa. He was stationed there two decades earlier.

Hanes as a protester “was on the other end of the spectrum,” he said in referring to his time as a Marine in Okinawa. When he was there to protest, he said, “I was spending time with the people, listening to their struggles, and actually seeing what’s happening over there. I participated with them in protests. I stood in front of trucks. I lay out on the road. I blocked construction crews.”

Hanes and Fanning say they will continue to defy the bloodlust of empire, at home and abroad, as a way to heal the wounds of war and affirm life. They have no intention of allowing the hate talk and racism at a Trump rally, or anywhere else, to be unchallenged. From their time in the military they understand the danger of dehumanizing others.

“You’ve got to stand up to confront creeping fascism,” Fanning said. “Silence is consent.”

Chris Hedges writes a regular column for Truthdig.com. Hedges graduated from Harvard Divinity School and was for nearly two decades a foreign correspondent for The New York Times. He is the author of many books, including: War Is A Force That Gives Us Meaning,What Every Person Should Know About War, and American Fascists: The Christian Right and the War on America.  His most recent book is Empire of Illusion: The End of Literacy and the Triumph of Spectacle.