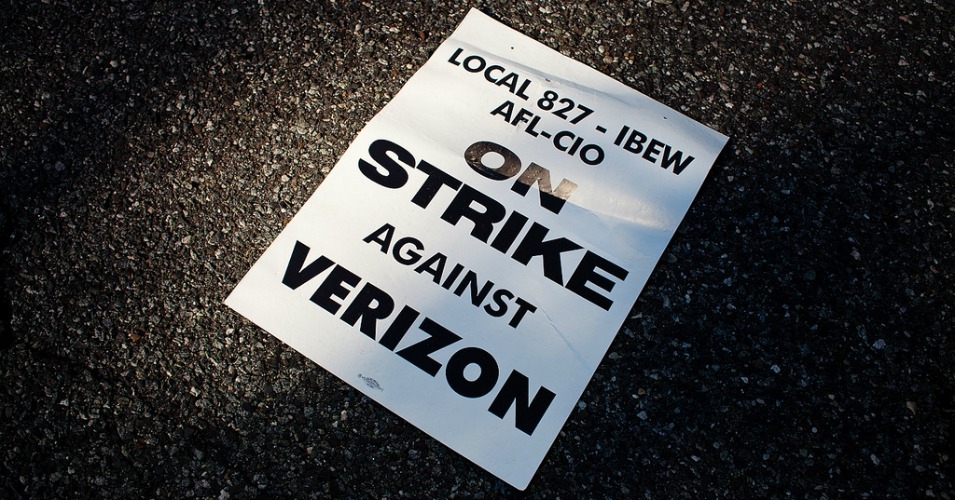 But after trying for ten months to reach a fair contract, “we have to take a stand now for our families and every American worker,” explained Myles Calvey, IBEW Local 2222 business manager and chairman of T-6 Verizon New England.

According to a statement from CWA, which is calling the strike along with the International Brotherhood of Electrical Workers (IBEW), Verizon is “attempting to make devastating cut backs” even after “significant worker concessions on healthcare,” including:

“More and more, Americans are outraged by what some of the nation’s wealthiest corporations have done to working people over the last 30 years, and Verizon is becoming the poster child for everything that people in this country are angry about,” said Edward Mooney, vice president of CWA District 2-13. “This very profitable company wants to push people down.”

Indeed, Jobs With Justice organizer Mackenzie Baris wrote in a blog post Monday: “If Verizon gets its way, we’re allowing corporate CEOs to rewrite the rules in their favor yet again, instead of ensuring that more of our friends and neighbors can hold the line for family-sustaining pay and benefits.”

CWA notes that last month, 20 U.S. senators sent a letter to Verizon CEO Lowell McAdam calling on him to “act as a responsible corporate citizen and negotiate a fair contract with the employees who make your company’s success possible.”

Ahead of his address to the Pennsylvania AFL-CIO’s annual convention, Sanders declared:

Verizon wants to take American jobs – call center jobs – out of this country and bring them abroad where people will be paid pennies an hour. That is unacceptable. We are going to have to deal with this corporate greed, which is more concerned with compensation packages for CEOs than about the needs of hard working people who want nothing more than to be able to live in dignity and security and bring their kids up in a decent way.

CWA has endorsed Sanders over his rival Hillary Clinton.

Last fall, Sanders became the first major presidential candidate in decades to join a worker protest, when he walked a picket line with Verizon workers in New York City. Huffington Post reporter Dave Jameison noted at the time that while “[b]oth candidates have placed economic inequality at the core of their campaigns as they seek the nomination…it’s much harder to imagine Clinton walking a picket line aimed at a telecom giant.”

This work is licensed under a Creative Commons Attribution-Share Alike 3.0 License
Editor’s note: Occupy World Writes does not endorse or support any political candidate or party. Any post that supports any candidate is the author’s view and does not necessarily reflect the views of OWW, Occupy Wall Street or any other affiliates of the Occupy Movement.