Paralleling the increasingly draconian policies marking a worldwide descent into fascism, are massive protests — born in the Arab Spring, but arguably an angrier, more potent extension of the Occupy movement — indicative of an unprecedented tipping point.

We, the people of this planet, now stand together, gazing over the precipice whose murky depths of State repression demand we ask one imperative question: have we finally had enough?

“[W]e have lost the way,” Charlie Chaplin implores us to consider in his renowned and timeless monologue from The Great Dictator, because“Greed has poisoned men’s souls — has barricaded the world with hate; has goose-stepped us into misery and bloodshed.”

And now, 76 years after Chaplin cautioned us to scrutinize our collective humanity, that avarice — evidenced in imperialism championed by the U.S. government — has ossified a lazy apathy in the populace, of seeming impenetrable resolve. Until now. 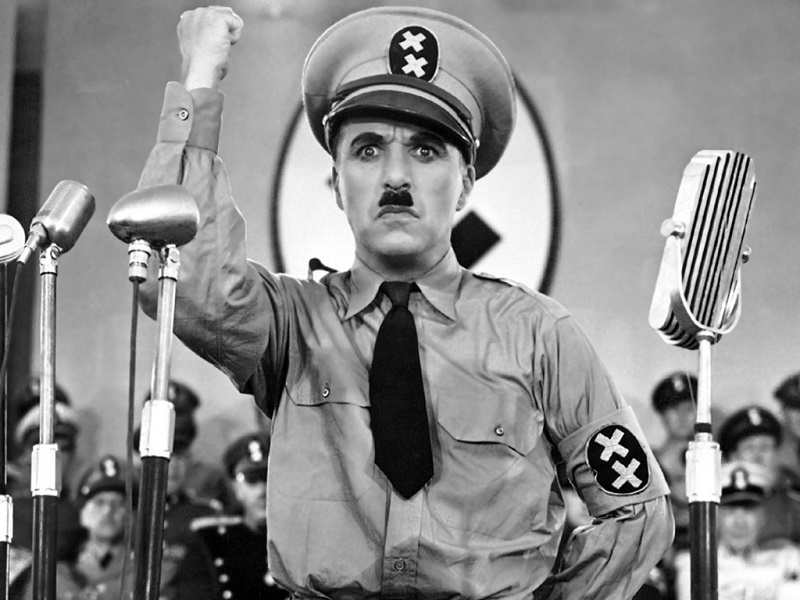 Though sparks of revolution have sporadically ignited people’s movements countless times before, our present tipping point most likely began with the self-immolation of a young fruit cart vendor in Tunisia in 2011. So incensed by an unjust law and a policewoman’s disrespectful public slap as she attempted to confiscate his only means of supporting a large family, Mohamed Bouazizi set himself on fire in front of a government building  — and set off the tremendous wave of protests for democracy and human rights, which came to be monikered the Arab Spring.

Occupy followed shortly afterward in a moment many believed with certainty would force an unparalleled shift toward freedom. But the government, keen to maintain its maniacal chokehold of control, also knew this — and infiltrated the movement to impart divisive infighting and confusion to effectively quash the threat.

But optimism, kindled by both protests — all sardonic arguments to the contrary aside — kept the vision for a more harmonious, just world burning in hearts and minds everywhere. Waiting.

Now, as the world’s so-called leaders, bereft of laudable intent, disseminate pawns and weapons of the war machine to geostrategically favorable locations — to fight the terrorist group it birthed through war on the concept of terrorism — it has become clear the end of empire’s brutal reign draws near. Though perhaps the greater bulk of people in the United States, under propaganda’s intoxicating spell, remain convinced the battle must be fought against the self-described Islamic State, more and more of us understand the imperialism-fueled root cause must, instead, be dismantled.

If the hardened cynicism Chaplin referred to elicits only doubt — doubt about that end, but also of the potential to maneuver that end in the people’s favor — consider the following, albeit brief and by no means complete, summary of currently-unfolding events.

Crushing austerity and economic collapse in Greece led to an uprising for change last year, as the people categorically rejected further hardship imposed by international creditors stemming from a debt crisis. A stunning reversal by the government of their line in the sand further destabilized the nation, which also continues to contend with an influx of refugees from Syria and the Middle East. In January, a farmer from Crete announced a telling, if perhaps extreme, warning which handily summarizes growing sentiment around Europe and the world. 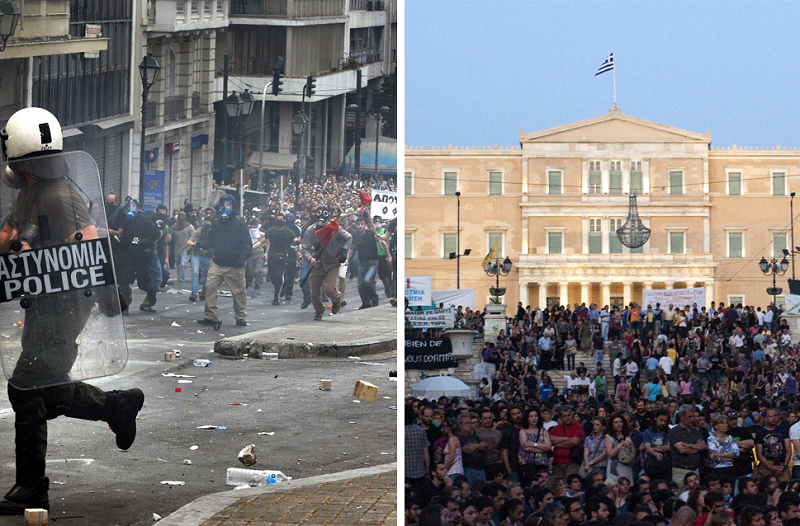 “It’s war,” Dimitris Vergos declared in the Guardian. “If they [politicians] go on pushing us to the edge, if they want to dehumanise us further, we will come to Athens and burn them all.”

Economic austerity measures fanned flames of outrage — already established with an authoritarian constriction of rights in Europe following the attacks in Paris and Brussels — which have compelled France’s blossoming Nuit Debout (Up All Night) movement into massive protests echoing those similar events in Greece. Nuit Debout called for international solidarity to stand against power, stating in part:

“This movement was not born and will not die in Paris. From the Arab Spring to the 15M Movement, from Tahrir Square to Gezi Park, Republic square and the plenty of other places occupied tonight in France are depicting the same angers, the same hopes and the same conviction: the need for a new society, where Democracy, Dignity and Liberty would not be hollow shells.” 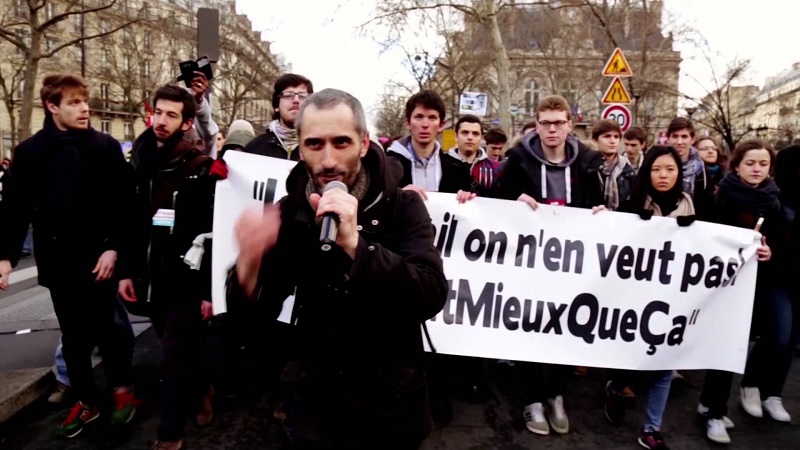 The ongoing ‘Up All Night’ movement in France. Image credit: alter JT.

Indeed, the thwarting and exploitation of human rights around the world led one human rights group to issue a startlingly broad, global warning to civilians.

“Your rights are in jeopardy: they are being treated with utter contempt by many governments around the world,” Salil Shetty, Secretary General of Amnesty International, implored. “Millions of people are suffering at the hands of states and armed groups, while governments are shamelessly painting the protection of human rights as a threat to security, law and order or national ‘values’ […]

Perhaps attempting to head off global revolution, the recent supposed leak of the Panama Papers has now been intimated to be a clandestine operation by the CIA. The agency has been accused of playing a role, and might have deemed the leak necessary to prevent the people’s usurpation of power — a paltry quelling so imperative, the agency could have felt it acceptable to allow “collateral damage” in the downfall of various world leaders and CIA-associated organizations.

As repercussions from the leak rang out worldwide, Americans remained fixated on the glorious conflagration that is the shit show dominating the 2016 presidential election. Bernie Sanders’s and Donald Trump’s challenges to the establishment political paradigm reinforce growing calls for an end to the Democrat-Republican duopoly’s vise grip on American politics. Mounting blatant instances of election fraud and realizations brought by the two parties’ employment of superdelegates to install establishment leaders — no matter the people’s feelings on the matter — have, perhaps, finally laid bare that elections are but an illusion used to deceive the masses into believing they have a say in who rules the nation.

Accordingly, that epiphany sparked ongoing protest in Washington, D.C., calling for nothing less than a drastic overhaul of the entire corrupt system, which targets moneyed influence of not only elections, but government, itself. Democracy Spring marched to Washington to stage a peaceful, nonviolent sit-in at the Capitol building — where protesters agreed to be, and thus were, arrested simply for speaking truth to plutocratic power. While the corporate media napped, hundreds were hauled away in cuffs on the first day of the sit-in — and hundreds more the following day. 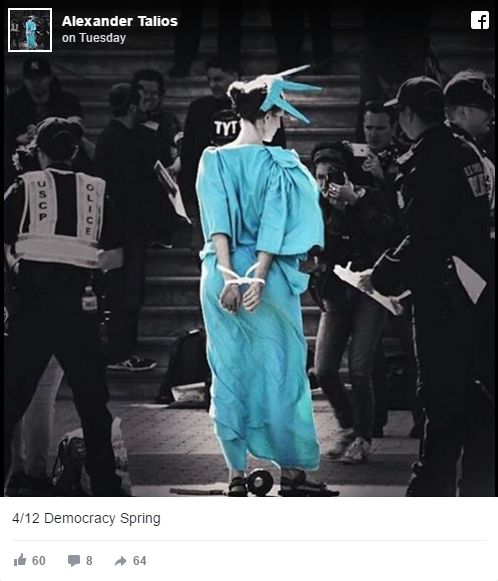 “This movement is yours too. It has no limit, no border and it belongs to all of those who wish to be part of it. We are thousands, but we can be millions.”

Outrage, desperation, ire, utter frustration — on an unprecedented, global scale. Will we be millions?

“Let us fight for a new world — a decent world — that will give men a chance to work; that will give youth a future, and old age a security. By the promise of these things, brutes have risen to power. But they lie! They do not fulfill that promise — they never will!”

Will we finally — finally — heed the warnings Chaplin suggested we should over three-quarters of a century ago?

Gazing into the abyss of worsening future authoritarian control, will we turn and walk away, ignoring our differences for the sake of our mutual betterment around the planet — or will we scoff, succumb, and tumble over the edge in our complacency?

The choice is ours.