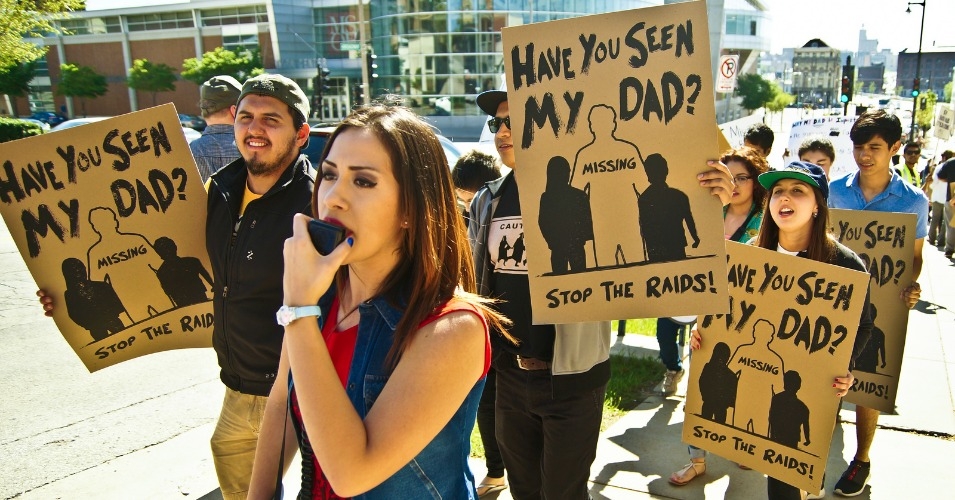 Protesters march against mass deportations in May 2014. (Photo: Joe Brusky/flickr/cc)

The case, brought by 26 Republican-led states and spearheaded by Texas Governor Greg Abbott, concerns two deportation protections that would shield roughly 5 million undocumented parents of American citizens and legal residents, as well as about 100,000 people brought to the U.S. as children.

Now, with only eight members sitting on the panel following the death of Justice Antonin Scalia in February, the court could end in a 4-4 deadlock—which would leave in place a previous ruling by a lower court that blocked the plan, without setting a Supreme Court precedent.

“It is a monumental day for millions of immigrant families across the U.S.,” said Jose P. Garza, executive director of the Texas-based Workers Defense Project/Proyecta Defensa Laboral, which held a rally on the courthouse steps in Washington, D.C. as justices heard arguments inside.

“Today, Workers Defense Project members and their families are in D.C. to send a message to our national leaders that we’re tired of our families being torn apart, and that we’re united and stronger than ever,” Garza said. “Texas is ground zero for DAPA/DACA, and nearly 70 percent of Texans support comprehensive immigration reform. Should the Supreme Court side with immigrant families, millions of hardworking individuals will be able to live without fear of being torn from their family, come out of the shadows, and strengthen our economy.”

Service Employees International Union (SEIU) president Mary Kay Henry added in a statement, “Millions of American families know that President Obama’s DAPA and expanded DACA stand on the right side of justice. We have faith that justice will prevail over the politics of hate and the Supreme Court will rule in favor of these programs.”

Justices Ruth Bader Ginsburg, Sonia Sotomayor, and Elena Kagan all voiced support for the administration’s policy. Sotomayor noted that the government has limited resources to carry out deportations and said that the more than 4 million immigrants awaiting reprieve were “living in the shadows” and “are here whether we want them or not.”

A decision is expected in June or July.