Brazil’s embattled leftist president Dilma Roussef watched on Sunday as right-wing opponents in congress voted in overwhelming numbers to impeach her, drawing cries of “coup, coup, coup!” from her supporters in the Workers’ Party (PT).

367 of the 513 members of Brazil’s lower house voted to impeach, surpassing the two-thirds majority required to send the proposal to the senate for a vote, which is expected to take place in a few weeks.

Critics of the process immediately decried the impeachment vote.

“This is an attempt to reverse the results of the 2014 presidential election by unconstitutional and illegal means,” said Mark Weisbrot, co-director of the Center for Economic and Policy Research, in an email to Common Dreams. “The president has not been linked to any corruption nor convicted of an actual crime.”

Rousseff is in her second term, but has faced plummeting support from Brazilians as the country is wracked by an entrenched recession and a health crisis caused by the Zika virus in the northeast.

Many of its politicians—including some PT lawmakers—have also been implicated in a grafting scandal that has “hobbled” the state-owned oil company and fueled widespread distrust of the country’s leaders, according to the New York Times.

“Almost every corner of the political system [is] under the cloud of scandal” in Brazil, reported the Times last month.

The graft scheme, called “Operation Car Wash” by investigators, has implicated most of Rousseff’s political opponents. The leader of the opposition party and house speaker, Eduardo Cunha, is not only being investigated for his role in the scheme but he was also named in the Panama Papers and outed as secreting away millions in a Swiss bank account as well as other offshore tax havens.

Meanwhile, Rousseff has not been accused of any crime—which Brazil’s constitution requires, for a motion to impeach to be legally enacted.

Instead, the impeachment proceedings are being justified by the revelation that Rousseff had temporarily transferred money from state-owned bank accounts to bolster the country’s social security program in 2014.

A group allied with Brazil’s Landless Workers’ Movement (MST), called Friends of MST, described such transfers as  “a procedure of routine public budget management at all levels of government—federal, state and municipal,” which was also used by previous administrations.

“To borrow an analogy from the United States,” Weisbrot described the charges against Rousseff in the Huffington Post, “when the Republicans refused to raise the debt ceiling in the U.S. in 2013, the Obama administration used a number of accounting tricks to postpone the deadline at which the limit was reached. Nobody cared.”

Rousseff has never been accused of corruption and is not implicated at all in “Operation Car Wash,” the largest scandal to hit the embattled political class in Brazil for some time.

While the right-wing parties are backed by Brazil’s wealthiest families and individuals, who also run the nation’s major media outlets, the lack of legal justification for Roussef’s impeachment has led critics to describe it—in no uncertain terms—as a coup.

“It is a coup because while the Brazilian Constitution allows for an impeachment, it is necessary for the person to have committed what we call high crimes and misdemeanors. And President Dilma did not commit a high crime or a misdemeanor. Therefore, what is happening is an attempt by some to take power by disrespecting the popular vote,” said former president and Rousseff’s political mentor Lula da Silva.

“It is a coup being carried out by the legislature, parts of the judiciary, and perhaps equally importantly, the vast majority of the media,” Weisbrot told Common Dreams.

Academics around the world have also condemned Rousseff’s impeachment in a widely circulated open letter to Brazilians, which argues that the “violation of democratic procedure represents a serious threat to democracy.”

“When the armed forces overthrew the government of President João Goulart in 1964,” the letter continues, “they used the combat against corruption as one of their justifications. Brazil paid a high price for twenty-one years of military rule. The fight for a democratic country has been long and arduous. Today, all those who believe in a democratic Brazil need to speak out against these arbitrary measures that threaten to erode the progress made over the course of the last three decades.”

Friends of MST also describes the impeachment as a coup d’etat, and writes, “Unlike President Dilma, the politicians calling for her dismissal are corrupt and are as dirty as they come.”

“If they manage to depose the president,” writes Friends of MST, “in exchange they expect to see the charges against them for the fraud they have committed dropped.”

And the AFL-CIO joined the global critique, as its president, Richard Trumka, expressed solidarity with the Workers’ Party in a statement released Friday.

“We firmly support the democratic, pro-worker programs for social justice that have been pursued and administered with professionalism and success, lifting over 40 million people out of poverty,” Trumka said.

“The most representative labor organizations in Brazil have long supported democracy and the rule of law, while calling for political reforms to eliminate practices that have made corruption endemic there,” argued Trumka. “Many of those now leading the call for impeachment have long blocked such reform and profited from corruption. ”

Weisbrot also implicates the U.S. for failing to speak out against the impeachment efforts, and points out the country’s record of supporting anti-left coups in Latin American throughout the 20th and 21st centuries:

The U.S. government has been quiet about this coup attempt but there is little doubt here about where it stands. It has always supported coups against left governments in the hemisphere, including — in just the 21st century — Paraguay in 2012, Haiti in 2011 and 2004, Honduras in 2009, and Venezuela in 2002. President Obama went to Argentina to lavish praise on the new right-wing, pro-U.S. government there, and the administration reversed its prior policy of blocking multilateral loans to Argentina. It could be a coincidence that the scandal at Petrobras followed a major NSA spying operation that targeted the company — or not. And within Brazil today, the opposition is dominated by politicians who favor Washington. It would be an added shame if Brazil lost much of its national sovereignty, as well as democracy, from this sordid coup.

“The Obama administration has been silent,” Weisbrot followed up with Common Dreams in an email, “most likely because it would like to get rid of the Workers’ Party government.”

“There is no criminal accusation against the President,” notes the Secretary General of the Organization of American States (OAS), Luis Almagro, who has in the past been an ally of the U.S. in Latin America.

“Rather she has been accused of the poor administration of public resources in 2014. This is an accusation that is political in character, and that does not merit an impeachment process,” Almagro writes. He also points out that the impeachment has drawn public critique from 130 members of Brazil’s public prosecutor’s office as well as from the United Nations and the Union of South American Nations (UNASUR).

“Conscience must be affirmed in truth and justice, and the political conscience is only valid when it is expressed according to the existing institutions in the country,” Almagro concludes.

Sunday’s impeachment vote was raucous and demonstrative, with politicians dedicating their votes to various family members and figures from Brazilian history—one even dedicated his vote to the general who led the anti-democratic coup in 1964 that ushered in decades of military dictatorship. 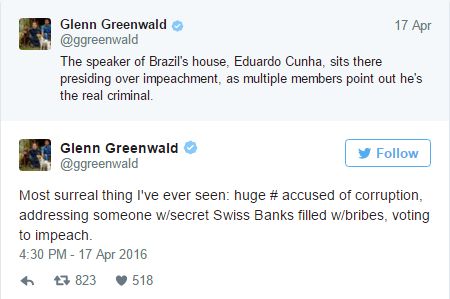 It remains to be seen if Rousseff will end up being impeached, although observers note that after Sunday’s overwhelming “yes” vote, it seems highly likely.

The lower house’s vote sends the proposal to the Brazilian senate, which must decide whether to accept the impeachment motion by mid-May. “If a simple majority (41 of the 81 senators) approves, which is likely,” the Guardian writes, “Rousseff must step aside for 180 days while the charges against her are investigated in committee. During this time, she remains in the presidential residence, but her vice president Michel Temer assumes power on an interim basis.”

Temer is a member of the opposition right-wing party, and has also been implicated in the “Operation Car Wash” graft scheme.

Within 180 days, a full plenary of the Brazilian senate will “sit in judgment on Rousseff,” the newspaper notes. “If two-thirds approve, which is uncertain, she will be ejected from office and Temer will be president until the next election in 2018.”

Crowds of anti- and pro-government supporters rallied and paraded in the streets on Sunday night. The anti-government crowds were reportedly far larger, and cheered as the impeachment vote was announced.

“Dilma has robbed the people with corruption and inflation. We must get rid of her,” Raquel Rosas, a school teacher, told the Guardian at an anti-government rally before the decision was reached. “But getting rid of her should only be the start. Temer and Cunha must go, too.”

“Nothing will change as a result of this,” lamented Chico Alencar, a politician with the Socialism and Liberty party, speaking to the Guardian about the impeachment on Friday. “It’s a lynching.”