Sitting next to Chancellor Angela Merkel during a summit in Germany, U.S. president continued to ignore opponents as he defended controversial agreement with European nations 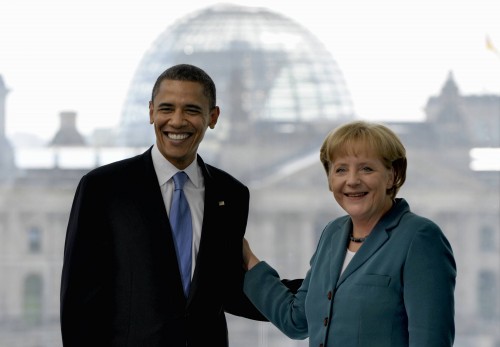 Despite the tens of thousands of people who marched against the deal in Germany ahead of his arrival and the steady drop in support for such neoliberal trade deals overall, President Barack Obama stood next to Chancellor Angela Merkel on Sunday and defended the Transatlantic Trade and Investment Partnership (TTIP) and said similar past deals have been an “indisputable” benefit to the U.S. economy.

“It is indisputable that [“free trade”] has made our economy stronger,” Obama said during a joint news conference. “It has made sure that our businesses are the most competitive in the world.”

Though the failure of past deals like NAFTA have become rallying cries on both sides of the partisan aisle in this year’s U.S. presidential campaign—with middle- and working-class Americans speaking out against them like never before—Obama said Sunday that “the majority of people still favor trade” and “still recognize, on balance, that it’s a good idea.”

Offering a quite visible contradiction to that assertion, tens of thousands marched in the streets of Hanover on Saturday to let both Obama and Merkel how strong their opposition to TTIP remains.

As the New York Times reported from near the summit on Sunday:

Monica Orth, 54, a therapist for teenagers who lives in Bonn, is one of many here who see the trade pact as a plot by big businesses — often American ones — to lower consumer standards, bypass national justice systems and undermine Europe’s way of life.

“I don’t want Monsanto and Bayer to determine which seeds I eat,” Ms. Orth said. As two friends nodded in agreement, she added, “Democracy is a really valuable thing, and I don’t want big business to take that from me.”

At least a dozen other protesters who were interviewed echoed her words. All accused corporations like Monsanto — the American biotechnology corporation reviled by some for using genetically modified seeds that it says help battle disease — or the German pharmaceutical company Bayer of trying to force on them products they do not want.

On Sunday, Lori Wallach, director of the Global Trade Watch project for Public Citizen in the U.S., said that the two leaders should reconsider their positions on the agreement.

“President Obama and Chancellor Merkel should continue efforts to deepen the friendship, cooperation, and yes, trade, between our countries,” said Wallach, “but the deeply flawed, pro-corporate process and agenda of the TTIP must be rejected.”

Unfortunately, the same secretive negotiating process – that is dominated by the interests of 500 corporate advisors, that was used by the Obama administration to conclude the highly unpopular Trans-Pacific Partnership (TPP) now drives the TTIP negotiations.

When talks were launched in 2013, many hoped TTIP would finally break the U.S. “free trade agreement” model that sets a ceiling on consumer and environmental safeguards and exposes our laws to attack in corporate arbitration tribunals. Instead, the TTIP is shaping up to roll back superior European food safety, chemical and consumer privacy safeguards and climate policies that many Americans would like to see here.

Though Obama recognized the TTIP would likely not be ratified during the final year of presidency, he said he hoped the groundwork would now be laid for his successor to finalize the deal.