“Teachers are not volunteers. Why doesn’t the state of Michigan take responsibility for funding the schools?” 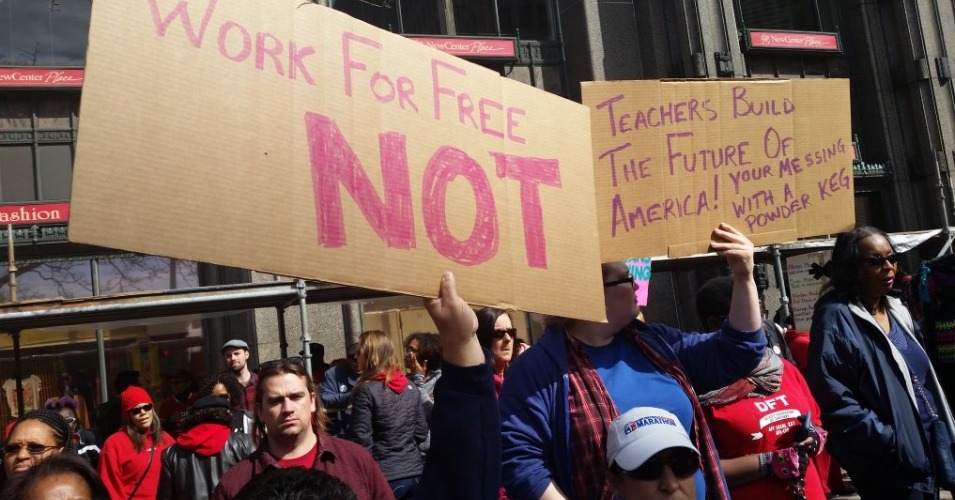 Teachers say the bankruptcy claim is a “scare tactic to get terrible legislation passed through that will give us money now but screw us all over even harder in the long run.” (Photo: DFT-Local 231/Twitter)

The Detroit Federation of Teachers (DFT) announced a second day of action after the city and state lawmakers failed to assure the union that teachers will be paid their full yearly salary.

“Detroit Federation of Teachers leaders spent the day meeting with DPS Transition Manager Judge Steven Rhodes and other decision makers to get an assurance that our members will be paid for their work,” the union said Tuesday. “Still, they refuse to say the three words our members need to hear: ‘I guarantee it.’ ”

“Their failure to give us that guarantee is tantamount to a lockout,” DFT declared.

Educators, students, and supporters Tuesday morning again rallied outside the DPS headquarters in downtown Detroit demanding a forensic audit of the district and guaranteed payment. This afternoon, DFT members are holding a meeting to discuss their next step. 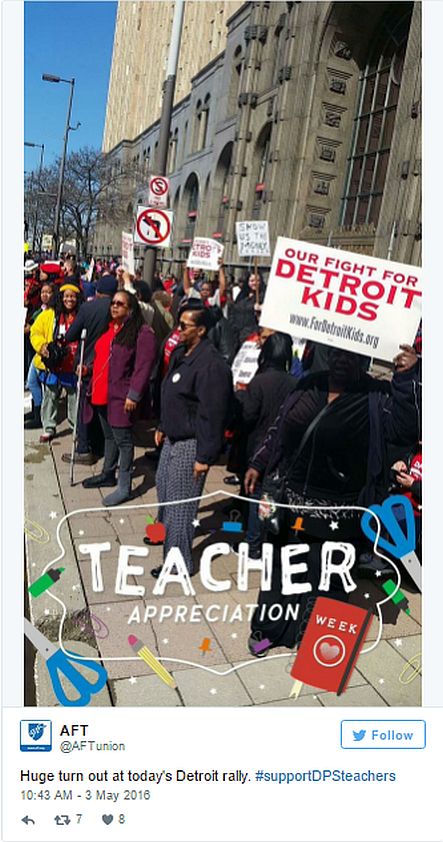 Without state action, the district is expected to run out of funds on June 30, although the state has given no guarantee that teachers will receive payment beyond April 28, which would mean withholding money that teachers have already earned. This is as “illegal as illegal can be, of course,” said DPS teacher Carole Hoste.

In a column Monday, Hoste clarifies what she said is a very important point “that media outlets are not detailing”:

As teachers, we are hired as nine month employees. Our salary is for nine months of work. We are given the option of whether we’d like to take that salary in 22 pays, or have it extended the full year in 26 pays.

The majority of teachers, of course, elect the 26 pays to keep checks coming through the summer. So no, we are not just getting paid to be on vacation, those checks that come in the summer are monies we earned in those nine months of the school year and have simply elected to have it distributed differently.

That being said, April 28 was the last working day the district can guarantee we’ll be paid for. This means we already worked last Friday potentially for free.

In total, the withheld payment could amount to as much as 19 percent of a teacher’s salary. Hoste said that she believes that the lack-of-funds claim is a “scare tactic to get terrible legislation passed through that will give us money now but screw us all over even harder in the long run,” referring to the package of bills aimed to bail out the bankrupt district that Michigan House lawmakers are debating on Tuesday.

The Senate bills, passed last month, split the school district in two, creating “one to pay off the $515-million operating deficit and the other to run the new school district,” the Detroit Free Press explains. The House package currently under debate “will only include money to pay off the debt and not provide an additional $200 million to run the new district. The House plan also puts some restrictions on unions, prohibiting the district from negotiating the school calendar.”

also doesn’t include the Detroit Education Commission, which was a key component in the Senate package that was essential to get Democratic votes for the bills and allows some authority over where schools – both public and charter – can locate in the future. Some influential charter school groups are adamantly opposed to the DEC.

The Coalition for the Future of Detroit School Children says the Senate bills are “absolutely the bare minimum,” while the Free Press editorial board on Tuesday described the House package as “a union-busting set of proposals not even worthy of consideration.”

Meanwhile, the striking teachers have been called “egotistical” for standing up for their rights while the entire Detroit community remains “locked out” of schools.

“Teachers are not volunteers. Why doesn’t the state of Michigan take responsibility for funding the schools?” asked education historian and public school advocate Diane Ravitch.

“Teachers have mortgage payments, utility bills, grocery bills. Being paid for their work isn’t a luxury, it’s a necessity,” declared a petition addressed to Michigan Gov. Rick Snyder, the Michigan legislature, and DPS. “It’s time to stop playing political games and do the right thing for Detroit’s students, educators, and community.”