In fact, the world is facing ‘a crisis of global injustice caused by war, poverty, and inequality,’ says Global Justice Now 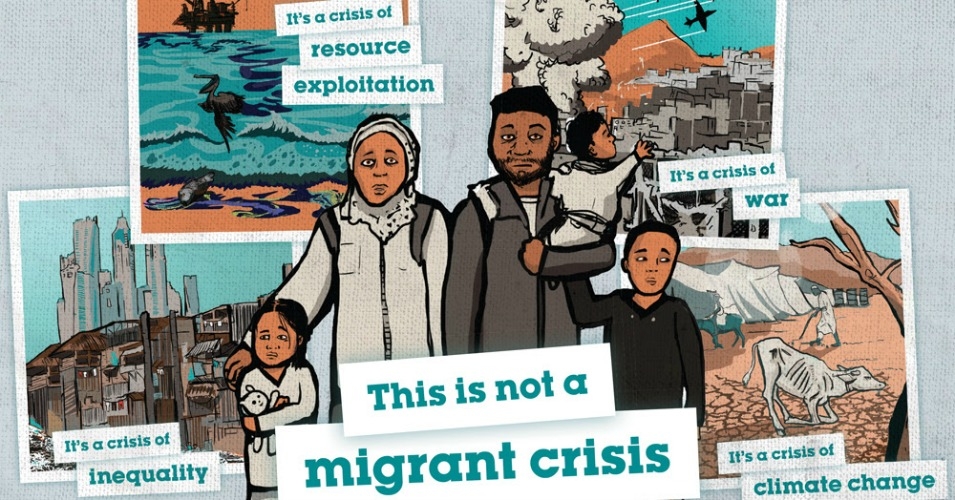 “Rich countries, with the help of the highly profitable security industry, have tried their best to use cruel migration controls, fences, walls and even guns to force people to accept lives of violence and destitution. This is not the solution.” (Image: Global Justice Now/Jacob V joyce)

Search the Internet for articles on the so-called “migrant crisis,” and half a million results pop up in a matter of seconds.

There’s just one problem: There is no such crisis.

“What we call a ‘migrant crisis,’ is actually a crisis of global injustice caused by war, poverty, and inequality,” said Global Justice Now director Nick Dearden, introducing a new briefing that draws attention to the multiple crises that are actually forcing people to relocate and calls for “free movement for everyone.”

Published Monday, the briefing—Migrant Crisis or Poverty Crisis? Why Free Movement is Vital in the Battle for Global Justice (pdf)—lays blame at the feet of overlapping root causes including:

“Framing the increased flow of people fleeing war and poverty as a ‘migrant crisis’ misses the point,” the document reads. “It assumes that it is the arrival of these people, rather than the situations they are trying to escape, that is the problem.”

In turn, cracking down on the migrants themselves is “not the solution,” Global Justice Now declares.

“Rich countries, with the help of the highly profitable security industry, have tried their best to use cruel migration controls, fences, walls and even guns to force people to accept lives of violence and destitution,” the briefing says. “This is not the solution. No matter how high the walls of Fortress Europe become, the only way to solve this problem is to deal with its root causes.”

Dearden added: “To demonize those making a rational choice on the part of themselves, their family and their community, obscures the truth. Migration is bringing those of us in Europe face to face with the reality of the brutal and unjust world our leaders have constructed.”

According to the International Organization for Migration (IOM), an estimated 184,887 migrants and refugees have entered Europe by sea in 2016, arriving in Italy, Greece, Cyprus, and Spain. At least 1,357 have died in the same time period.

Instead of “pulling up the drawbridge,” Global Justice Now calls for governments to work toward freedom of movement, supported by “properly funded public services” and “decent employment laws,” among other things.

Not to do so amounts to “apartheid on a global scale,” said Alex Scrivener, the author of the briefing and GJN policy officer.

“It’s unacceptable that people from rich countries are free to go almost anywhere in the world while people from the global south are denied freedom of movement, even when they are fleeing war and extreme poverty,” Scrivener argued. “A right that only exists for the rich it not a right at all. There’s one rule for ‘expat’ Europeans and North Americans and another for the rest of the world.”

The Global Justice Now briefing also calls for an end to immigration detention as soon as possible.

On Saturday, simultaneous protests took place at more than a dozen immigrant detention centers across the UK and in The Netherlands, Germany, Belgium, and Iceland. A mass “Refugees Welcome” rally is planned for May 25 in London, while the UK-based Stand Up to Racism coalition is organizing a major aid convoy to the Calais camp in France in conjunction with trade unions, the People’s Assembly Against Austerity, and others beginning June 18.