‘Washington is activating measures at the request of Venezuela’s fascist right, who are emboldened by the coup in Brazil,’ said the nation’s president.

Venezuela’s leftist president Nicolas Maduro announced a 60-day state of emergency on Friday evening and accused the U.S. of plotting with right-wing groups within the country to overthrow his government.

On the same day, unnamed D.C. officials warned of a coming “meltdown” in Venezuela. 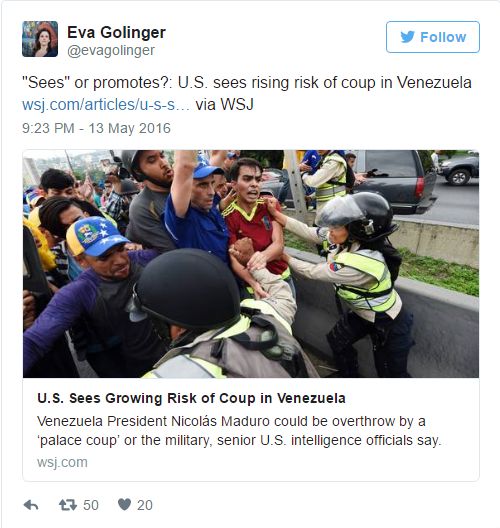 The country is struggling with widespread blackouts, shortages, and looting as the collapse in oil prices has plunged it into economic turmoil.

On Friday night, Mr. Maduro delivered a televised national address in which he directly accused the U.S. of seeing to foment his ouster.

“Washington is activating measures at the request of Venezuela’s fascist right, who are emboldened by the coup in Brazil,” he said.

“We have already seen the image of the oligarchy signing and removing power to the people.”

Washington has had an acrimonious relationship with Caracas for years, especially following U.S. support for a short-lived 2002 coup against late leader Hugo Chavez.

Venezuela’s ruling Socialist Party has long been a strong ally of Rousseff’s Workers Party, however, and her departure adds to Maduro’s isolation in Latin America.

The United States is increasingly concerned about the potential for an economic and political meltdown in Venezuela, spurred by fears of a debt default, growing street protests and deterioration of its oil sector, U.S. intelligence officials said on Friday.

In a bleak assessment of Venezuela’s worsening crisis, the senior officials expressed doubt that unpopular leftist President Nicolas Maduro would allow a recall referendum this year, despite opposition-led protests demanding a vote to decide whether he stays in office.

But the two officials, briefing a small group of reporters in Washington, predicted that Maduro, who heads Latin America’s most ardently anti-U.S. government and a major U.S. oil supplier, was not likely to be able to complete his term, which is due to end after elections in late 2018.

“You can hear the ice cracking. You know there’s a crisis coming. Our pressure on this isn’t going to resolve this issue,” one official told the news service.

“This is really not the case that the U.S. is rooting for any outcome other than there not be an economic meltdown or social violence,” another said. “There are reasons for concern that over the summer as Venezuela gives importance to payments on debt over imports that these events could spiral.”

“Maduro’s government has consistently paid its debt on time,” noted Reuters, “and has slammed market fears of a default as an international smear campaign.”