Both Exxon and Chevron hold their annual shareholder meetings on Wednesday. Activists plan to protest both events. 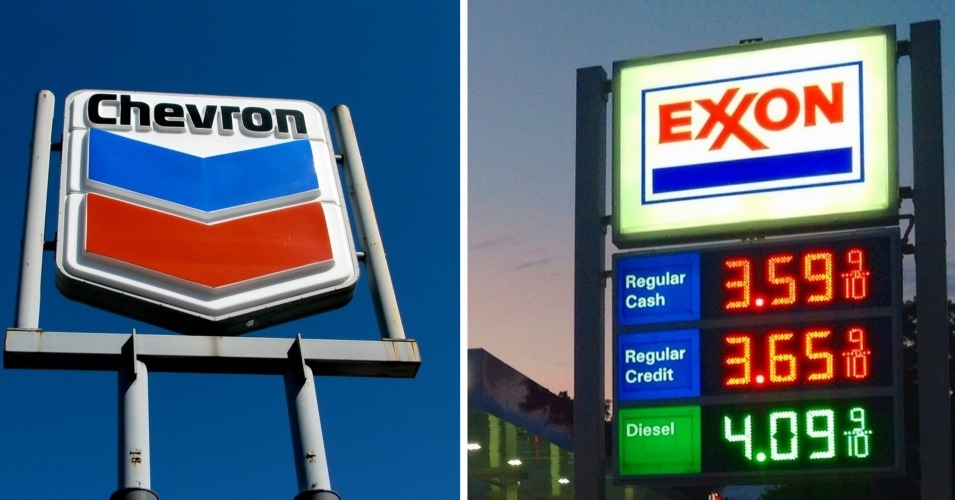 Chevron and Exxon have opposed environmental resolutions in the past. (Photo: Roo Reynolds/flickr/cc + Mike Mozart/flickr/cc)

When they gather in Texas and California, respectively, for their annual shareholder meetings next week, ExxonMobil and Chevron will face increasing pressure from shareholders, environmentalists, and impacted communities to act on climate change.

The meetings, both taking place next Wednesday, come amid a concerted effort to hold Exxon and other fossil fuel corporations accountable for deceiving the general public and their shareholders about climate science.

But if history is any indication, the Big Oil giants will remain as intractable as ever, even in the face of a growing climate crisis.

Since 1990, 62 climate-related resolutions have been introduced at annual shareholder meetings, author and 350.org co-founder Bill McKibben writes in an op-ed on Friday. Each of them has failed.

“In 2015,” he offers as an example, “shareholder activists put forward a variety of resolutions, the most important of which would have set goals for cutting greenhouse gas emissions. Again Exxon opposed them, its CEO informing shareholders that if climate change caused any ‘inclement weather’ humans would ‘adapt’.”

Here’s what’s happened since that meeting: we’ve had 12 straight months of record-busting temperatures; this February and March were the hottest months ever recorded on our earth. We’ve seen the highest wind speeds ever recorded in the western and southern hemispheres. We’ve watched the rapid death of vast swaths of coral, as hot oceans triggered by far the largest “bleaching” event ever recorded.

Oh, and we learned, from Pulitzer-prize winning journalists, that Exxon knew about climate change in 1981 but continued to fund climate deniers for 27 more years. That while they were telling shareholders that there was too much uncertainty to take action against climate change, they were raising the decks of their facilities and rigs to withstand the sea level rise they knew was coming. That they were funding the architecture of denial that kept a phony debate alive for a quarter century.

With that as the backdrop, we approach the next Exxon annual meeting at the end of the month. Once again environmentalists are presenting the same resolutions, in a kind of rite of spring that’s likely to have the usual outcome.

It may be time to “give up the charade,” McKibben argues.

“If this meeting ends with the same dismal failure as the past 25,” he says, “it’s time to admit the obvious: the Exxons of the world are not going to change their stripes, not voluntarily. It will be time for state treasurers and religious groups to join those students and frontline communities and climate scientists who are saying ‘No more.’ It will be time—past time—to get serious, divest and break free of fossil fuels once and for all.”

Activists plan to hold a rally to this effect outside the Exxon shareholder meeting in Dallas next Wednesday.

“Shareholders have all the evidence they need—Exxon has lied to them about the financial risks of climate change since 1977,” reads the call-to-action. “Exxon robbed humanity of half a century’s worth of time to fight climate change, and their core business model relies on wrecking our communities and the climate.”

The Union of Concerned Scientists is also circulating a petition in advance of both meetings, specifically challenging Exxon and Chevron to sever ties with the American Legislative Exchange Council (ALEC), the right-wing lobby group it says “peddles disinformation about climate science to policy makers and seeks to roll back the policies we need to reduce global warming emissions.”

Meanwhile, renowned Indigenous leader Humberto Piaguaje of the Secoya nationality, is traveling from his jungle home in the Ecuadorian Amazon to confront Chevron CEO John Watson at his company’s annual meeting on Wednesday in San Ramon, California.

Piaguaje will take Watson to task for Chevron’s refusal to pay a historic $18.1 billion court judgement requiring the company atone for systematically discharging 16 billion gallons of toxic waste into Amazon waterways from 1964 to 1992 and abandoning more than 900 unlined waste pits in a 1,500 square mile area.

“Our leaders plan to confront Mr. Watson with judgments from multiple courts mandating the company pay its pollution bill to the people of Ecuador,” said Piaguaje. “Mr. Watson needs to accept responsibility for Chevron’s environmental crimes in Ecuador, apologize to the company’s victims, and abide by court orders that compensation be paid.”

Until that happens, Piaguaje continued, “Mr. Watson and Chevron’s Board members will be considered by us to be fugitives from justice subject to arrest for crimes against humanity under principles of universal jurisdiction.”

In a clear demonstration of shareholder liability, notes the Oakland-based Amazon Watch, which works with Chevron’s victims, the corporation has used dozens of law firms and up to 2,000 lawyers to fight local Indigenous groups, but it continues to suffer courtroom setbacks.

Earlier this year, a report by securities lawyer Graham Erion concluded that Chevron “appears to be actively trying to hide its Ecuador risk from its investors and the markets.”

Indeed, said Amazon Watch associate director Paul Paz y Miño: “Watson’s refusal to clean up his toxic waste in Ecuador and his evasive approach to climate change might explain why the company is now seen as the poster child for corporate greed.”

Furthermore, according to Amazon Watch:

Chevron also faces several other shareholder resolutions – one sponsored by the Union of Concerned Scientists – that suggest the company has fallen well behind its industry peers in reducing its greenhouse gas emissions and adapting to the challenges of climate change. One such resolution calls on the company to produce reports establishing company-wide goals for the reduction of greenhouse gas emissions. Another asks for a change in dividend policy given that the global shift away from fossil fuels will likely lead to billions of dollars of stranded assets in the form of oil reserves. Watson and Chevron’s Board oppose all of the climate change resolutions.

A protest will take place in San Ramon on the day of the shareholder’s meeting, featuringIndigenous allies affected by Chevron in Ecuador as well as people from impacted communities near Richmond, California—site of a major Chevron refinery.

According to organizers, “They will all have two things in common: they all come from communities that have suffered the dire impacts of Chevron’s reckless pursuit of profits, and they’re all fighting back.”