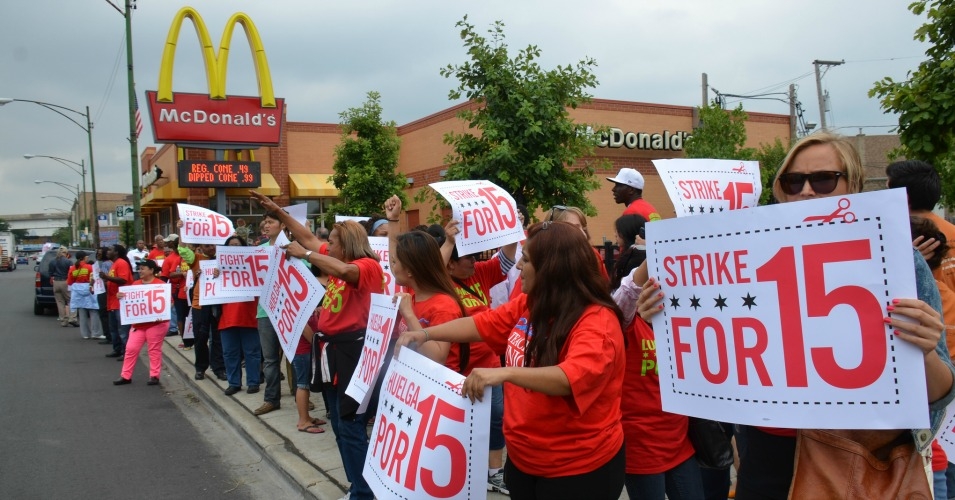 On Wednesday, in addition to a mid-day strike at the flagship Rock N Roll McDonald’s in Chicago, organizers say thousands of underpaid workers will stage a protest at the company’s headquarters just outside the city, in Oak Brook, Illinois.

The suburban location will be the site of a second rally and march on Thursday as well as the shareholder meeting takes place.

According to a statement from organizers, in addition to those working for the fast food giant in the U.S. and abroad, other underpaid workers, including those in the child care and airport sectors, will be taking part.

“We’re not just about $15 per hour,” 20-year-old Ke’Jioun Johnson, who works at a McDonald’s in Chicago, said to Reuters. “We’re going to keep fighting until we get union rights,” said Johnson, adding, “It’s what we need to survive—a living wage and the hours to live off of.”

As its workers eke out a living, “They company’s stock is trading near all-time highs, spurred by a profit-boosting turnaround plan that includes all-day breakfast,” Reuters notes.

That’s a point noted by organizers as well, who say the low wages force workers to rely on public assistance—as such a sort of corporate welfare takes place. As the New York Timeseditorial board wrote last month, ” taxpayers continue to pick up the difference between what fast-food workers earn and what they need to survive. An estimated $1.2 billion a year in taxpayer dollars goes toward public aid to help people who work at McDonald’s.”

McDonald’s is also facing heat this week over its controversial “McTeacher’s Nights.”

During these fundraising events, McDonald’s further markets itself to children by having teachers “work” and serve the fast food fare to their young students, and in so doing, says the Campaign for a Commercial-Free Childhood, the events

encourage students to eat junk food, undermining the hard work that parents, teachers, and administrators do to promote healthy habits for children. Parents and students trust teachers to do what’s best for students’ health. By enlisting teachers to market junk food to kids, McDonald’s manipulates that trust. In the midst of one of the largest preventable health crises in the U.S. — one that is closely linked to diet and increasingly affects children — it’s deeply irresponsible for McDonald’s to exploit limited school budgets to market fast food to children.

Campaign for a Commercial-Free Childhood joined other advocacy groups Public Citizen and Corporate Accountability International this week in gathering roughly 30,000 petition signatures to McDonald’s executives urging an end to the events.

A former McDonald’s’ CEO, meanwhile, is making waves for his comments Tuesday on FOX Business Network’s Mornings with Maria.

Ed Rensi said that increasing the wage to $15 an hour would “cause a job loss across this country like you’re not going to believe,” and suggested that it would instead be better to ditch the workers and purchase “a $35,000 robotic arm” to do the tasks.

Editorial Note:
Ed Rensi currently serves as CEO of Famous Dave’s of America Inc, where his annual cash compensation is $378,846 per year. This comes out to $182.14 per hour over a 40 hour work week, and does not include his $99,103 Stock Award Value of his annual compensation package.