‘If Exxon intentionally misled the public about climate change and fossil fuels, then it should be held accountable.’ 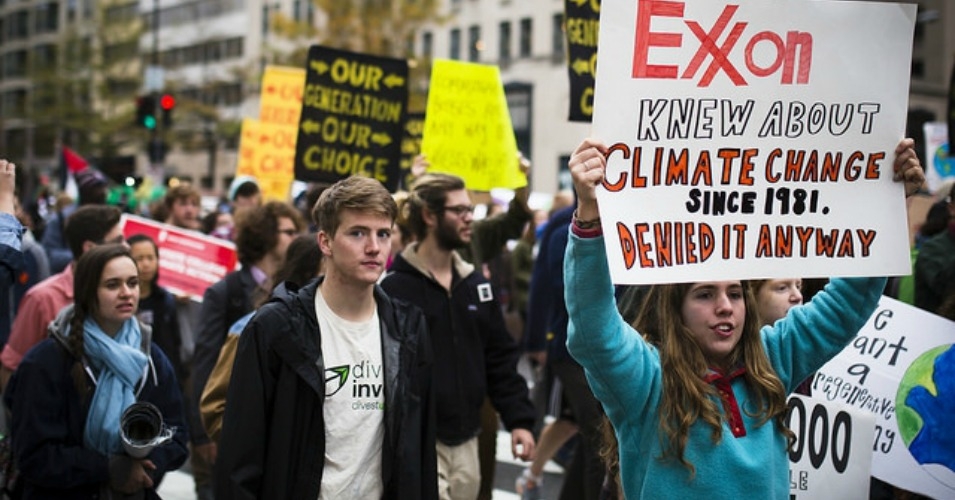 Activists protested after it was made public that ExxonMobil for years deliberately tried to hide the truth about the impact of greenhouse gas emissions. (Photo: Johnny Silvercloud/cc/flickr)

Exxon shareholders on Wednesday rejected a resolution that would have forced the oil giant to calculate and report the impact of climate change on its long-term business prospects, as well as other climate-related proposals, in some cases by an “overwhelming majority.”

“One of the 11 proposed did pass,” Horn continues, “which allows minority shareholders to appoint someone to a seat on ExxonMobil’s Board. As Reuters detailed, this in effect means that a ‘climate activist could eventually become a director at the oil giant.'”

Environmental campaigners said the rejection was no surprise given Exxon’s history of rejecting similar proposals, as well as its blatant suppression of climate change science.

“Today’s results mimic the rejection of over 60 proposed shareholder resolutions to address climate change over the past two decades,” 350.org noted.

“The recommendation by Exxon’s board to outright reject every single climate resolution from shareholders sends an incontestable signal to investors: it’s due time to divest from Exxon’s deception,” added 350.org executive director May Boeve.

Boeve said that the “results reaffirm that Exxon will never turn from its deceptive and destructive ways.”

The demand for ExxonMobil to come clean with its investors, and the public, for its deliberate climate change deception was on full display in Dallas on Wednesday as activists rallied outside the oil giant’s annual meeting calling on financial backers to “divest from Exxon’s pollution, deception, and greed.”

Exxon shareholders seated inside the Texas symphony hall were considering a resolution (pdf) that would require the company disclose the risks that climate change poses to its investors. The shareholder proposal—put forth by the New York state comptroller; a trustee of the New York State Common Retirement Fund, the third largest U.S. pension fund; and the Church of England—specifically calls for an annual assessment “of long term portfolio impacts of public climate change policies… consistent with the globally agreed upon 2 degree target.”

Despite Exxon’s stated opposition to the proposal, investors representing more than $6 trillion in assets are expected to support it.

Meanwhile, climate activists outside erected an ice sculpture emblazoned with the phrase “#ExxonKnew,” referring to the recent revelations that the world’s largest publicly traded oil and gas company had for decades suppressed scientific evidence related to global warming. 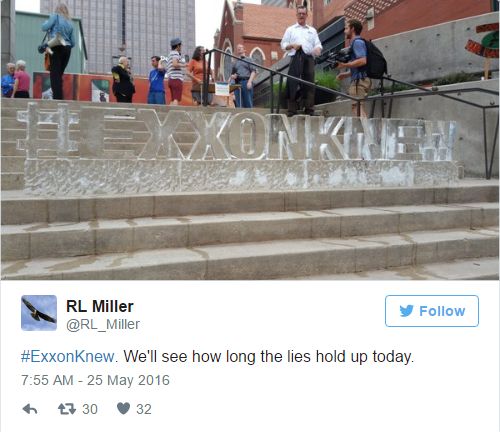 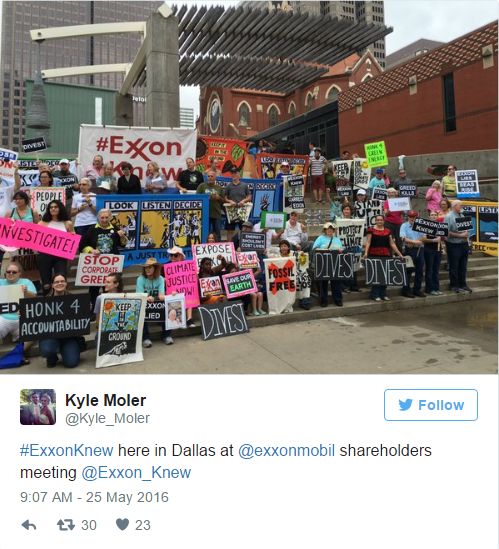 That information, first made public last fall by reporters with Inside Climate News and theLos Angeles Times, sparked an expansive investigation by a coalition of 19 attorneys general.

“It is the right of shareholders to know the entire scope of a company’s operations, and the public has the right to know about something as threatening to public health and economic well-being as climate change,” said Leslie Samuelrich, president of Green Century Capital Management, which is also heading a coalition of investors representing $9.95 billion in assets under management (AUM) that is also supporting the New York Attorney General investigation.

“If Exxon intentionally misled the public about climate change and fossil fuels, then it should be held accountable,” Samuelrich added. “Only a full investigation will uncover if the company knew, what it knew and when it knew it.”

(It is worth noting that the Guardian was specifically banned from the shareholder meeting on Wednesday because of the newspaper’s “lack of objectivity on climate change reporting.”)

Claudia Black-Kalinsky, whose father was one of the original Exxon scientists to raise concerns about the impact of greenhouse gases on the global climate, published an op-ed Wednesday asking how different the world might be if the oil giant had only listened to its own researchers.

When my father first briefed Exxon’s executives about climate change, the concentration of carbon dioxide in the atmosphere stood at 330 parts per million. Now it is 20% higher and Nasa scientists are telling us the first few months of 2016 are so warm we’re almost certain to set another global heat record this year.

What would the world be like today if Exxon executives had listened to my father? If Exxon had led the industry in confronting climate change instead of funding public relations campaigns to disprove its existence? Perhaps sea levels would not be rising as quickly. Perhaps the fires burning across Alberta would not be as destructive. Perhaps we would already be transitioning to cleaner fuels and energy sources.

Black-Kalinsky, whose daughter Claudia took part in the protest Wednesday, concludes that “We’ll never really know what would have happened if Exxon had listened to my father,” but notes that at the shareholders meeting, ExxonMobil CEO Rex Tillerson “can still do the right thing.”

Updates are being shared online under the hashtag #ExxonKnew.

Also Wednesday, environmental activists are picketing outside the Chevron shareholder meeting in San Ramon, California specifically demanding accountability for the communities, from Ecuador to Richmond, California, who have suffered from “Chevron’s reckless pursuit of profits.”

In both shareholder meetings, investors with the As You Sow advocacy group have put forth an additional proposal calling on Chevron and Exxon to report their reserves—their primary assets—not just in the traditional “barrels of oil equivalent,” but in an energy-neutral metric that applies to all energy resources, including renewables such as solar, wind, and geothermal.

“We have to get beyond a barrel-based standard,” said Danielle Fugere, president of As You Sow. “Replacing every barrel of oil with another barrel of oil doesn’t make business sense in a carbon-constrained economy that’s moving away from fossil fuels…Even oil companies can change—they must change.”