‘Not accounting for the social cost of carbon in federal leasing decisions is a negligent disregard for the public safety.’ 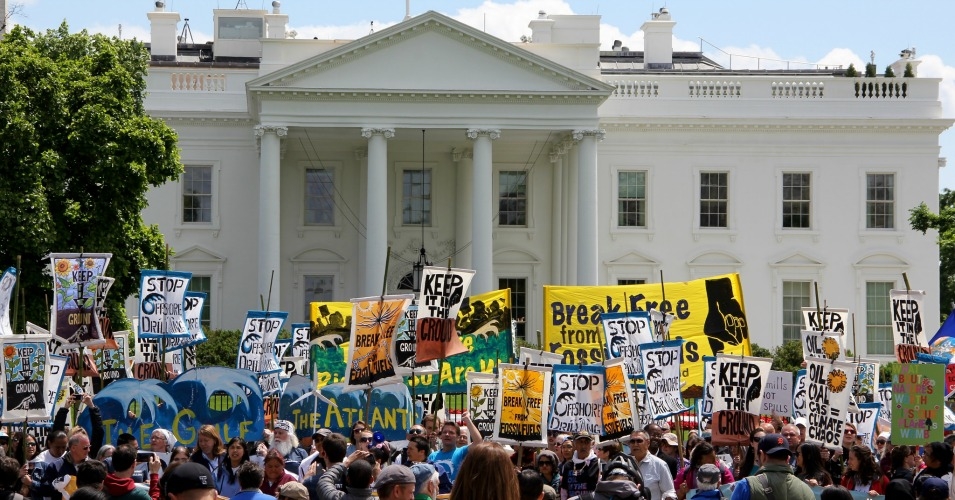 Representing “negligent disregard for the public safety,” the Obama administration’s proposal for selling fossil fuel companies new leases for drilling in the Arctic Ocean and the Gulf of Mexico comes with a social cost of up to $179.2 billion and risks jeopardizing climate commitments made in the recent UN climate deal.

That’s according to The Climate Change Costs of Offshore Oil Drilling, a new report released by Greenpeace USA and Oil Change International, which looks at the carbon emissions from consumption of the oil expected to be produced from those leases scheduled to take place from 2017 to 2022.

The net increase in global carbon emissions from those leases over their lifespans would be 850 million metric tons of carbon dioxide, the publication states. That’s the equivalent to the annual emissions of 3.6 million passenger vehicles over fifty years, it notes.

And “this increase in emissions,” report author Tim Donaghy, senior research specialist with Greenpeace USA, writes, “comes at a high cost to you and me.” Explaining that social cost, Donaghy writes that, for one,

Similarly, climate change will impact our food systems by changing temperature and rainfall patterns and affecting crop yields. Changes in food production will be costly for farmers and consumers — and could be devastating for the planet’s poorest inhabitants.

And as sea-levels continue to rise, coastal governments will have to spend tax dollars to guard against floods and storm surges.

Yet not only are these social costs not borne by the fossil fuel companies themselves; they are not taken into consideration by the regulatory body, the Bureau of Ocean Energy Management (BOEM) in its environmental impact analysis for drilling plans.

And that’s a big problem, the report states, as

GHG emissions and their attendant social costs are likely to be significant factors and must be included in any credible analysis of BOEM’s Proposed Program. Using BOEM’s own production estimates and timelines, we calculate that the Proposed Program would lead to a net global increase in CO2 emissions.

A comprehensive climate analysis would seek to assess BOEM’s policies in the context of our international climate commitments and the latest scientific information, with the goal of providing the information necessary for policy makers to apply a “climate test” to energy policy decisions. Such an analysis must encompass global impacts, direct and indirect emissions, and should include a range of scenarios to capture the uncertainties in both markets and future policies. At least one such scenario must assess the program in the context of limiting global warming to 2 degrees Celsius. Given that President Obama has committed the United States to addressing climate change at the highest level, it remains a serious dereliction of duty for BOEM to provide less-than-complete information to the public and policy makers

“The Obama Administration has advanced a number of commendable policies to mitigate climate change,” Donaghy said in a press statement. “However, leasing federally-owned lands and waters to fossil fuel companies threatens to counteract that progress, including the expected results of the Clean Power Plan and US commitments in the framework of the Paris Climate Agreement.”

“Not accounting for the social cost of carbon in federal leasing decisions is a negligent disregard for the public safety. All Federal energy policy should be held to a climate test, requiring decisions be contingent upon preventing the worst impacts of climate change,” he added.

Environmental groups had cheered in March when Obama kept the Atlantic off the proposed drilling plan but said his climate legacy would only be secured by protecting all federal waters from fossil fuel extraction.

“We are telling Big Oil to take their rigs and go home,” Bucket Brigade Executive Director Anne Rolfes said in March during a protest disrupting a federal auction for Gulf of Mexico oil and gas leases. “And we are telling our elected officials to get with it, to lead the transition from dirty energy to one that relies on wind and solar.”