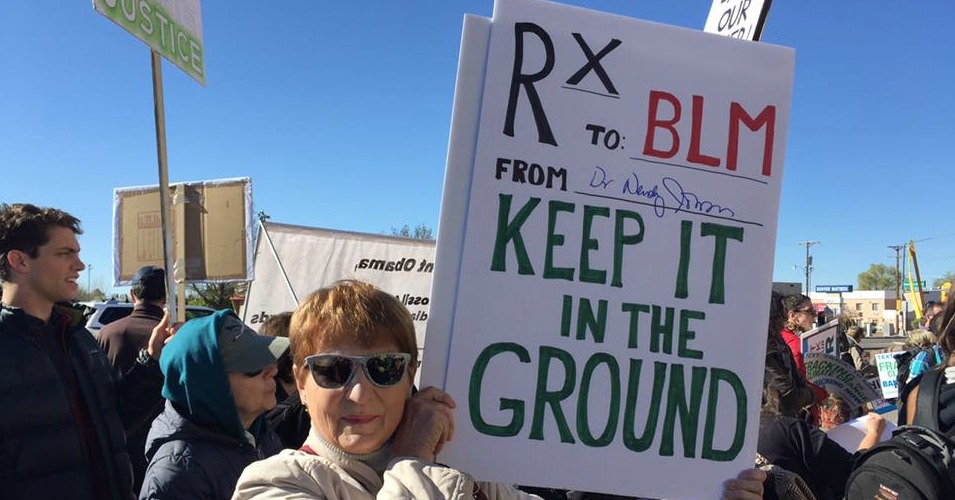 A sign at a Keep It in the Ground protest earlier this year. (Photo: WildEarth Guardians/flickr/cc)

In a blow to environmentalists calling on the Obama administration to keep fossil fuels in the ground, a judge on Tuesday struck down as unlawful the new rule meant to regulate fracking on federal lands.

The decision from Judge Scott Skavdahl of the District Court of Wyoming “is a major loss for the administration, which worked for years to update its oil and natural gas drilling regulations to account for dramatic increases and innovations in fracking,” The Hill reports.

The rules released in March 2015 were blasted at the time as “toothless” and “nothing more then a giveaway to the oil and gas industry.” But Skavdahl, siding with industry groups and some western states, said the Bureau of Land Management (BLM)—which resides within the federal Department of the Interior—lacked the authority to implement even these loophole-ridden rules.

“Congress has not delegated to the Department of Interior the authority to regulate hydraulic fracturing,” Skavdahl wrote in his opinion (pdf) published late Tuesday. “The BLM’s effort to do so through the Fracking Rule is in excess of its statutory authority and contrary to law.”

Previously, Skavdahl placed a temporary injunction on the fracking rule, which remains under review by the 10th Circuit Court of Appeals.

And that is where Bill Snape, senior counsel at the Center for Biological Diversity, believes the final determination will be made. Describing Skavdahl’s ruling as “illogical” and “absurd” Snape told Common Dreams the fracking rule “will prevail” before the three judges of the 10th Circuit.

“How could it not?” he wondered. “We’re just supposed to allow this detrimental act to sully our public lands?”

“It has been clear all along that the Bureau of Land Management has the authority to safeguard our health and our environment from the dangers of fracking,” she said in a statement on Wednesday. “Our hope remains that the full 10th Circuit will continue its review of the case and uphold this rule.”

Indeed, in a brief filed to the 10th Circuit just this week, BLM lawyers and their environmental allies argued (pdf) that both “the plain language and history” of federal law grant the agency power over development and environmental protection on federal lands.

Far from being “an unlawful federal power grab,” as opponents have argued, the fracking regulations are “simply a long-overdue update of BLM’s rules to address the recent hydraulic fracturing boom,” the brief states.

The government could appeal Tuesday’s ruling.