Her ouster—an effort she’s calling a coup— would be end of 13 years of rule by leftist Workers’ Party, and would leave in place unelected Temer 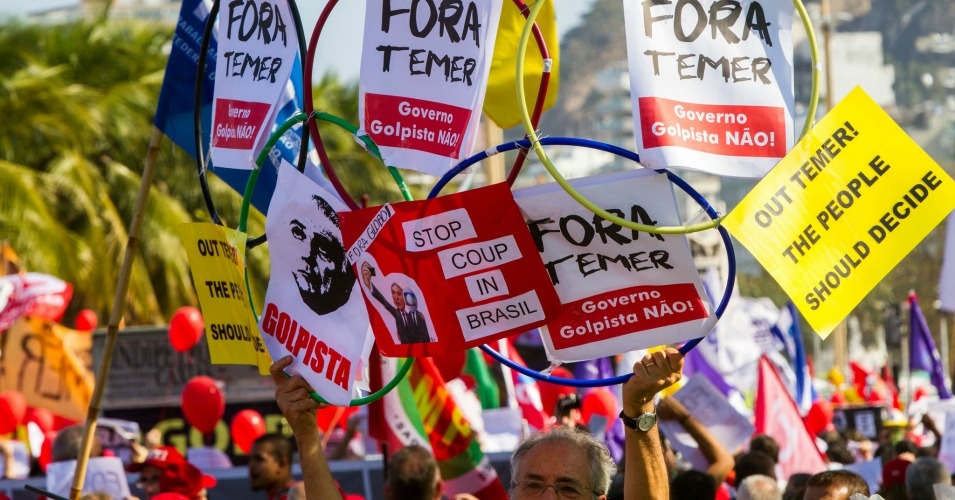 Demostrators hold signs during a march in Rio on August 5, 2016 . (Photo: Mídia NINJA/flickr/cc)

Brazil’s Senate on Wednesday voted to hold an impeachment trial for suspended President Dilma Rousseff, an effort that could mark the end of 13 years of rule by her leftist Workers’ Party.

“Today is not a good day for our democracy,” said Senator Paulo Rocha, an ally of the nation’s first female president. He added that “there is a political alliance that smells of a coup” working against her.

Rouseff is accused of breaking budget laws, though the federal prosecutor last month found that she did not commit a crime.

The 59-21 vote marks “the final step before a trial and vote on whether to remove her from office,” the Associated Press reports.

“A verdict is expected at the end of the month and will need the votes of two-thirds of the Senate to convict Rousseff, five votes less than her opponents mustered on Wednesday,”Reuters reports.

Rousseff has been suspended since May when the senate voted to start an impeachment trial against her. That meant then-Vice President Michel Temer became interim president. If Rousseff is removed, the unelected, right-of-center Temer would serve until 2018, the rest of Rousseff’s term.

Rousseff has called the effort a coup, and Brazil’s largest newspaper in May published evidence of “explicit plotting” between a top government official and oil executive who said her ouster was the only way to halt a wide corruption probe.

A vote to remove her from office is “a fait accompli—the verdict will be both entirely deserved and profoundly unjust,” Franklin Foer, a Slate contributing editor, wrote this week. “On the one hand, there’s no denying she has failed miserably as president—so badly that it’s hard to imagine her governing effectively in the coming months and years. On the other hand, incompetence isn’t the grounds for her removal. The case against her is largely a concoction, drummed up by sinister figures.”

Sen. Bernie Sanders (I-Vt.) entered the fray on Monday, issuing a statement saying he was “deeply concerned” by the move, which represented “not a legal trial but rather a political one.” He added, “To many Brazilians and observers the controversial impeachment process more closely resembles a coup d’état.”

“After suspending Brazil’s first female president on dubious grounds, without a mandate to govern, the new interim government abolished the ministry of women, racial equality, and human rights. They immediately replaced a diverse and representative administration with a cabinet made up entirely of white men. The new, unelected administration quickly announced plans to impose austerity, increase privatization, and install a far right-wing social agenda,” Sanders’ statement continued.

The Vermont senator’s “denunciation of the attack on Brazilian democracy is part of a growing international recognition of the illegitimacy of Temer’s rule,” Glenn Greenwald wrote at The Intercept. He continued:

Just two weeks ago, “40 Democratic members of the U.S. House of Representatives published a letter … expressing ‘deep concern’ about threats to democracy in Brazil.” Similar denunciations of Dilma’s impeachment have been issued by British Labor Party leader Jeremy Corbyn, British MPs and labor leaders, the Organization of American States, dozens of members of the EU Parliament, and Brazil’s first Pulitzer Prize winner. So dubious is Temer’s standing that, as AP reported last month, many world leaders are avoiding the Rio Olympics so as to avoid the quandary of whether to shake his hand.

Temer—who chose a Cabinet of “all rich, white males“—is embroiled in corruption scandals and is very unpopular but is “business-friendly,” according to Reuters.

He was greeted with “boos” at the opening of the Olympic games in Rio.  And, as NPR reported, that was “only the first of several protests inside Olympic venues. Posts on social media went viral, showing people with tickets being forcibly removed by security—some simply for wearing shirts calling for Temer’s ouster.”

Author Jules Boykoff adds at Jacobin: “‘Fora Temer’ [Temer Out] was the rallying cry of an enormous mobilization along Copacabana Beach on August 5, the morning of the opening ceremony. Brazil’s president is extremely unpopular in Brazil, with one recent poll putting his approval rating at 11 percent. […]”