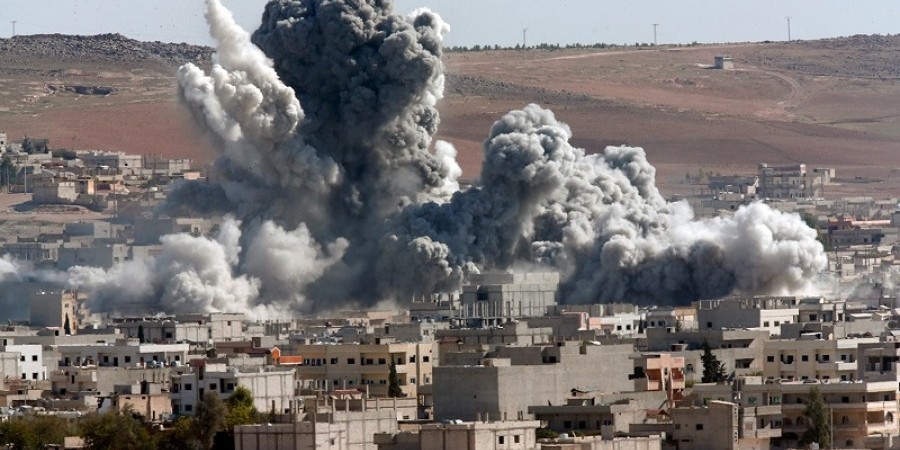 Turkey has “launched a major military intervention in Syria,” the Guardian reports, dispatching tanks and warplanes to purportedly reclaim the city of Jarabulus, currently held by the Islamic State (ISIS), and to attack Kurdish forces in northeastern Syria.

“At 4am this morning, operations started in the north of Syria against terror groups which constantly threaten our country,” said Turkish President Recep Tayyip Erdoğan in Ankara on Wednesday, according to the Guardian. Turkey’s government classifies Kurdish nationalists as terrorists, although Erdoğan also pointed to a bomb attack that killed 54 in Southern Turkey, which the Turkish regime blamed on ISIS, as justification for Wednesday’s siege in Syria.

Turkey’s onslaught is backed by the U.S., while the Kurdish group that Turkey is targeting, the leftwing Kurdish nationalist YPG, is also backed by the United States.

“If Turkey’s forces drive out ISIS,” observes the Christian Science Monitor, “it could lead to a messy confrontation between the Turkish government and the U.S.-backed YPG.”

And while Turkey has long battled against Kurdish nationals both within and outside of its borders while the West turned a blind eye, Wednesday marks the first large-scale Turkish military operation against Kurdish militias in Syria.

It appears the military operation is in part to prevent the creation of a Kurdish-controlled territory on the other side of Turkey’s border. Just days ago, U.S.-allied Kurdish forces successfully overtook the former ISIS stronghold of Manbij—after U.S. bombs killed up to 28 civilians in the northern Syrian city.

“If the YPG took Jarabulus, it would be in a position to close the gap between two Kurdish cantons in the north of Syria and create a united strip of Kurdish control along the Turkish border, which Syrian Kurds refer to as Rojava,” writes Middle East expert Juan Cole. “Turkey is desperate to halt that attempt at Syrian Kurdish consolidation of territory.” There have already been reports of Turkish airstrikes on Syrian Kurds, Cole notes.

“Kurdish gains along the Turkish border have been anathema to Erdoğan’s government, which had restarted its war against the Kurdish population inside Turkey as well as against [Kurdish] PKK camps in Iraq,” argues commentator Vijay Prashad. “It was this war that opened up tensions between Washington and Ankara, with the former uneasy with the Turkish assault on some of the main groups that had been fighting [ISIS].”

Vice President Joe Biden is also currently in Ankara, reportedly to assure Erdoğan that the U.S. is not behind the country’s recent failed military coup, and to request that Turkey “step up to do its part” against ISIS, Cole notes.

If Turkey has agreed to target ISIS to assuage D.C. politicians, it seems that Washington may be threatening to pull support from the Kurds in order to assuage Turkey: the APreported Wednesday that Biden has ordered U.S.-backed Kurdish militias to give up territory and “move back across” the Euphrates River, as Turkey desires, or risk losing U.S. support.

Indeed, the Middle East Eye quotes a Turkish official saying that the U.S. “promised” Turkey that the U.S.-backed YPG will not try to consolidate more territory near the Turkish border—and if the group did, Turkey would “take the requisite action”:

Turkish foreign minister Mevlet Cavusoglu told a press conference in Ankara that the Turkish army would continue its efforts against the YPG, saying they were “no different” from the PKK[, which is recognized by the E.U. and U.S. as a terrorist organization].

“Why did Salih Muslim and the YPG get upset by our operation against [ISIS]?” he asked. […] “They have their own hidden agenda.”

He added that the YPG should “not cross west of the Euphrates”.

“The U.S. promised this to us,” he explained. “If they cross we will take the requisite action.”

Indeed, Turkey’s military assault also comes on the heels of news that U.S.-backed Kurdish forces are currently attacking Syrian President Bashar Assad’s militias in the northern city of Hasakah. The Daily Beast notes: “In a conflict where alliances shift kaleidoscopically and the potential consequences of unwanted clashes are apocalyptic, this battle has raised the possibility Washington will be drawn into a direct conflict with the Syrian regime even as the Obama administration continues to focus its war effort on [ISIS].”

And while alliances shift and U.S. policy becomes more and more contradictory, the horrific Syrian war is now in its sixth year: “[…] the kaleidoscope continues to turn, and the war goes on,” as the Daily Beast writes.