United Nations official echoes call for Standing Rock Sioux Tribe to have say with regard to $3.8 billion oil pipeline 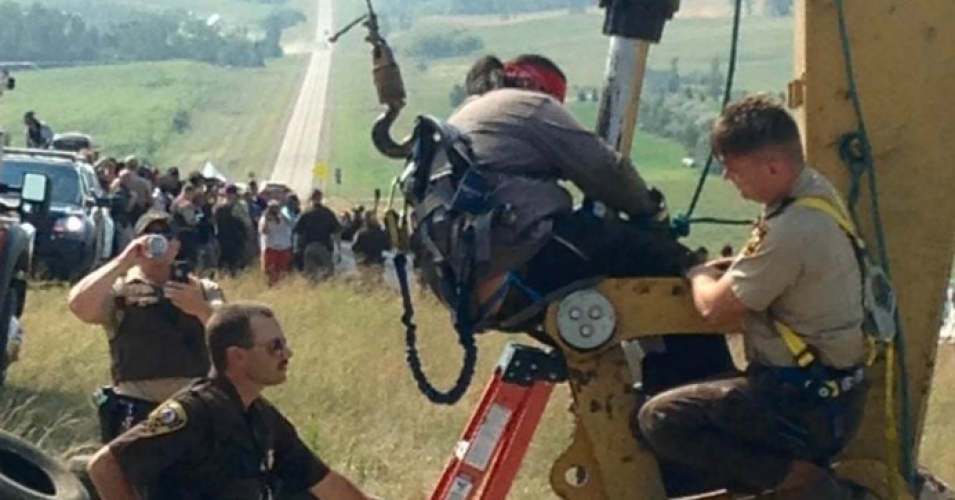 “I am here to protect the water for the children…and to protect our ways of life,” said Iyuskin American Horse of the Rosebud Sioux Tribe, who was arrested Wednesday. (Photo: Earthjustice/Twitter)

Thirty-eight activists were arrested in two states on Wednesday as protests against the $3.8 billion Dakota Access Pipeline (DAPL) continue.

While construction on one section of the pipeline has been halted until a court ruling expected next week, work continues at other sites. Earlier this week, a federal judge in Des Moines, Iowa, foiled an attempt by DAPL parent company Energy Transfer Partners to silence protests there by denying its request for a temporary restraining order.

Subsequently, 30 people were taken into custody on Wednesday, during “one of the largest demonstrations yet” in that state against the four-state pipeline project, according to the Des Moines Register.

“It also was the first time a formal effort was made to encourage a large number of arrests in a bid to obstruct construction work in Iowa,” the Register noted. “Organizers vowed afterward that additional demonstrations will be forthcoming, along with more arrests.”

Eight more “water protectors” were arrested in North Dakota on Wednesday, during a protest that saw several people lock themselves to heavy machinery and authorities shut down a stretch of highway. One man, Iyuskin American Horse of the Sicangu Lakota (Rosebud Sioux Tribe), spent more than six hours attached to a digger at a DAPL worksite in Mandan, North Dakota.

“I am here to protect the water for the children and all of the unborn, and to protect our ways of life,” said American Horse. “I came here to let them know that what they’re doing is wrong. This is nonviolent civil disobedience—and this is what it comes down to, and I’m here.”

Cody Hall, of the Red Warrior Camp, which was established in solidarity with the Sacred Stone Camp that is leading anti-DAPL resistance, added: “Today’s action was done by [non-violent direct action] protectors who were tired of the daily progress conducted by the oil construction company. They seized the momentum and made the energy and oil companies lose what would have been profit for the day.”

Noting that tribal members from across the country and Canada have joined the movement, the statement read in part:

Thousands of Indigenous peoples from different nations have gathered in the Sacred Stone Spirit camp, in North Dakota, to block construction of the pipeline. Actions such as these tend to occur in different parts of the world and are often misunderstood and described as rebellious, backward thinking, and unilateral opposition to development. Therefore, we call on the United States government to establish and implement, in conjunction with indigenous peoples concerned, a fair, independent, impartial, open, and transparent process to resolve this serious issue and to avoid escalation into violence and further human rights abuses.

For Indigenous peoples, the environment is a living entity that contains our life sources as well as our sacred sites and heritage. The environment is an important part of our lives and any threats to it impacts our families, ancestors, and future generations. It is therefore imperative that the United States respects and recognizes the intrinsic, inter-related rights of Sioux and their spiritual traditions, history, philosophy, and especially their rights to their lands and territories.

The world is watching what is happening in North Dakota.

In fact, according to reporting on Wednesday by InsideClimate News, “[s]enior officials at the U.S. Environmental Protection Agency and two other federal agencies raised serious environmental and safety objections to the North Dakota section” of the pipeline—”the same objections being voiced in a large protest by the Standing Rock Sioux tribe that has so far succeeded in halting construction.”

“But those concerns were dismissed by the U.S. Army Corps of Engineers, which relied on an environmental assessment prepared by the pipeline’s developer, Dakota Access LLC, when it approved the project in July, according to public documents,” the website reported.

Meanwhile, journalist Lee Fang reports for The Intercept on Thursday on spurious claims by its proponents that “the controversial project will enhance energy independence.”

Such claims, Fang notes, have not only “been touted by company brochures and a pro-pipeline website,” but have “also been used to criticize hundreds of demonstrators in North Dakota who say the Dakota Access endangers drinking water and threatens sites that are sacred to a number of Native American nations and tribes.”

However, the unrefined crude pumped through the DAPL won’t all be for domestic use, as some of it may end up being exported, The Intercept reports, citing “regulatory filings that suggest some of the oil transported by the Dakota Access Pipeline will be shipped overseas.”

The Red Warrior and Sacred Stone camps this week announced the #NoDAPL Global Weeks of Solidarity Action, which will run from September 3-17.