The Standing Rock Sioux won a temporary victory on Friday, but pipeline opponents say that the fight need not drag on 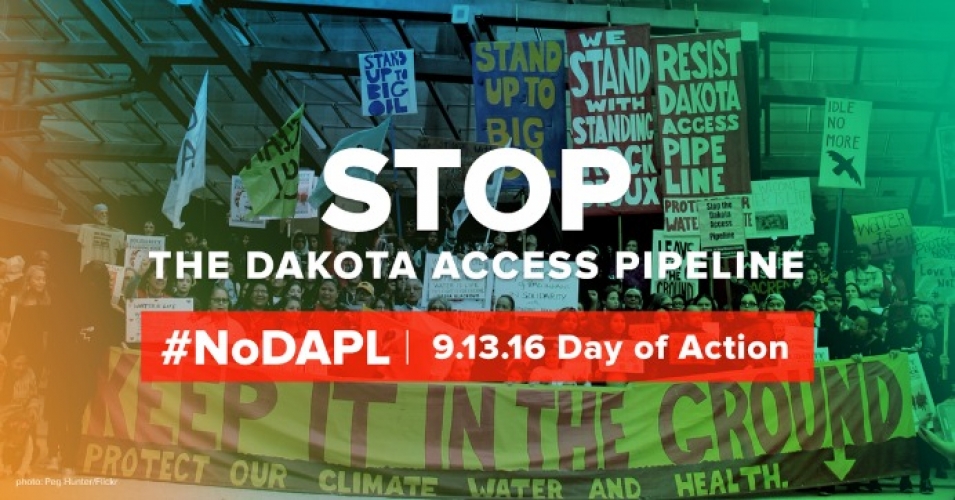 “To defeat a pipeline, it takes a movement of people from all corners of the nation,” reads the call to action. (Photo by Peg Hunter/Flickr. Overlay via 350.org)

The fight is not over, is the word from the tribes gathered at the Sacred Stone camp, whose months-long resistance against the Dakota Access pipeline (DAPL) has captured national attention. Heeding that call, more than 100 #NoDAPL solidarity actions are being held on Tuesday to put national pressure on U.S. President Barack Obama to revoke the pipeline’s permits once and for all.

“To defeat a pipeline, it takes a movement of people from all corners of the nation,” reads the call to action.

“Right now, we’re witnessing one of the most courageous stands against a fossil fuel project this country has ever seen,” it continues. “Thousands of Indigenous activists have set up prayer camps along the pipeline route in a historic moment of nonviolent resistance. They’re fighting with everything they have to protect their water, the land, their history, and the climate—and we need to fight with them.”

The Standing Rock Sioux won a temporary victory on Friday when the Obama administration suspended construction on Army Corps land bordering or under Lake Oahe until further review. The statement further called on the pipeline company to halt construction within 20 miles of that site.

But pipeline opponents say that the fight need not drag on, and that Obama can revoke the permit granted by the U.S. Army Corps—just like he rejected Transcanada’s Keystone XL pipeline.

Further underscoring the dangers of the project, a new analysis on Monday by the fossil fuel industry watchdog Oil Change International found that the 1,172-mile crude oil pipeline would lock-in yearly emissions equivalent to 30 coal-fired power plants and would make it impossible to meet the targets set forth in the Paris climate agreement.

“The Dakota Access pipeline would be with us decades into the future,” wrote Lorne Stockman, research director with Oil Change International. “Once built and operating the economic incentives to keep it going will be hard to overcome. Every year it will be the source of carbon emissions equivalent to nearly 30 coal plants. Even though it may be the case that those emissions would anyway occur this year or next year, or five years from now, it cannot be the case that those emissions can occur in 20, 30 or 40 years from now. Building Dakota Access would be yet another barrier to the path to climate safety.”

Tuesday’s Day of Action follows similar events over the weekend—from Maine to Arizona to Massachusetts—during which local tribes came together with hundreds of supporters to “stand in unity and solidarity, to protect the protectors,” as articulated by Michael Rossi, a member of the Lakota Nation and the organizer of the Phoenix, Ariz. rally.