Over one-third of sites hit by Saudi-led coalition’s air strikes have been non-military, new data reveals 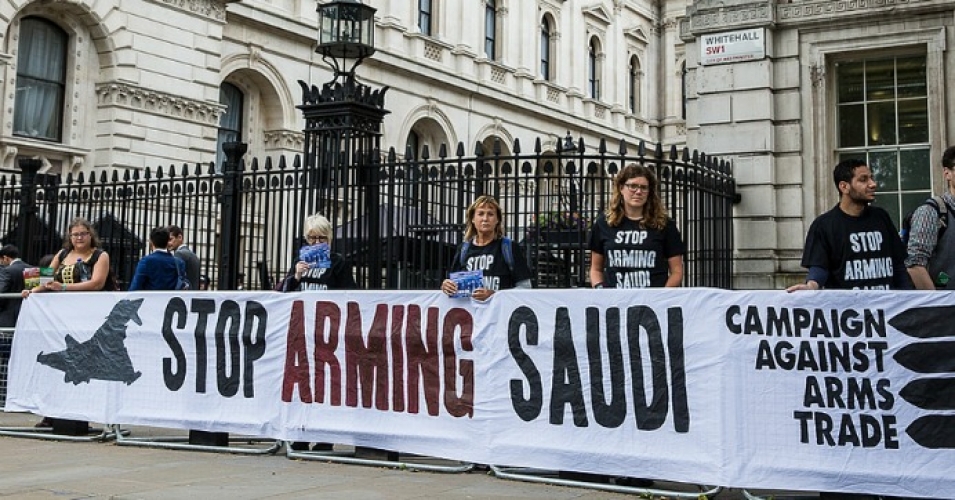 Amid “unrelenting attacks on civilians and on civilian infrastructure” and as a new campaign aims to block the Obama administration from selling $1.15 billion worth of weapons to Saudi Arabia, new reporting sheds further light on the devastation the kingdom’s military coalition, backed by the U.S. and U.K., has wrought on Yemen’s population.

Over one-third of all the coalition’s air strikes in Yemen have hit civilian targets like schools and hospitals, the Guardian reports Friday.

In fact, there have been “repeated strikes on school buildings and hospitals.”

In five of the past 18 months, the Guardian continues, “the Saudi-led coalition hit more non-military sites than military.”

The revelation is based on a survey of the strikes conducted by the Yemen Data Project. From the Guardian:

The independent and non-partisan survey, based on open-source data, including research on the ground, records more than 8,600 air attacks between March 2015, when the Saudi-led campaign began, and the end of August this year. Of these, 3,577 were listed as having hit military sites and 3,158 struck non-military sites. […]

Staff at the Yemen Data Project said they adopted rigorous standards, using news reports aligned with both sides in the conflict and crosschecked against other sources, such as social media, non-governmental organizations and evidence on the ground.

The findings, the paper writes, “will refocus attention on U.K. arms sales to Saudi Arabia” and its role in the war.

Asked about the findings, Saudi foreign minister Adel bin Ahmed al-Jubeir dismissed the claim that civilian sites were targeted, telling the Guardian that Houthi rebels “turned schools and hospitals and mosques into command and control centers. They have turned them into weapons depots.”

On the other side of the Atlantic, human rights campaigners continue their efforts to block the pending arms deal. Several online petitions have already been circulating, and Human Rights Watch this week launched a campaign calling on people to tell their senators to stop the deal by instead backing a bipartisan resolution.

As the organization’s Kristine Beckerle Finberg and John Sifton wrote earlier this month,

Senators should be asking tough questions about this sale, which, if it goes ahead, is sending precisely the wrong message at a crucial time. The same week the Obama administration notified Congress about the sale, the Saudi-led coalition bombed another civilian factory, killing 10 civilians. A few days later, an airstrike hit a Doctors Without Borders-supported hospital, killing 19. The most recent attacks follow dozens of unlawful strikes investigated by Human Rights Watch and others, including those using US-made weapons.

This Senate Resolution of Disapproval would attempt to block the latest U.S. arms sales to Saudi Arabia and send a strong bipartisan signal to the Saudi government that the U.S. is not going to continue arming Saudi Arabia so long as its military continues to commit abuses in Yemen without any accountability. Tell your Senator to support this resolution now.

The human rights organization say the Senate is set to vote on the resolution Sept. 20.

Additional reporting this week by the Associated Press puts a human face on the high levels of child malnourishment gripping the port city and surrounding area of Hodeidah.

“There is an accelerating increase in the number of children suffering malnutrition,” Ossan al-Abbsi, a pediatrician at Hodeidah’s central hospital, told AP. “We used to have five cases while the rest of the beds were empty on any given day. Now, you can never find an empty bed in our unit.”

In the country overall, the UN says, 1.5 million children suffer from life-threatening malnutrition.

Last month, Julien Harneis, UNICEF representative in Yemen, said, “Children are paying the heaviest price of the conflict in Yemen.”

U.N. humanitarian coordinator for Yemen Jamie McGoldrick said recently that he was “deeply disturbed by the unrelenting attacks on civilians and on civilian infrastructure throughout Yemen by all parties to the conflict, which are further destroying Yemen’s social fabric and increasing humanitarian needs, particularly for medical attention at a time when the health sector is collapsing.”

McGoldrick said last month that the death toll from the ongoing conflict surpassed 10,000.