Amid global crises that have seen people forced from their homelands in unprecedented numbers, citizens call on UK government to open doors to those in need 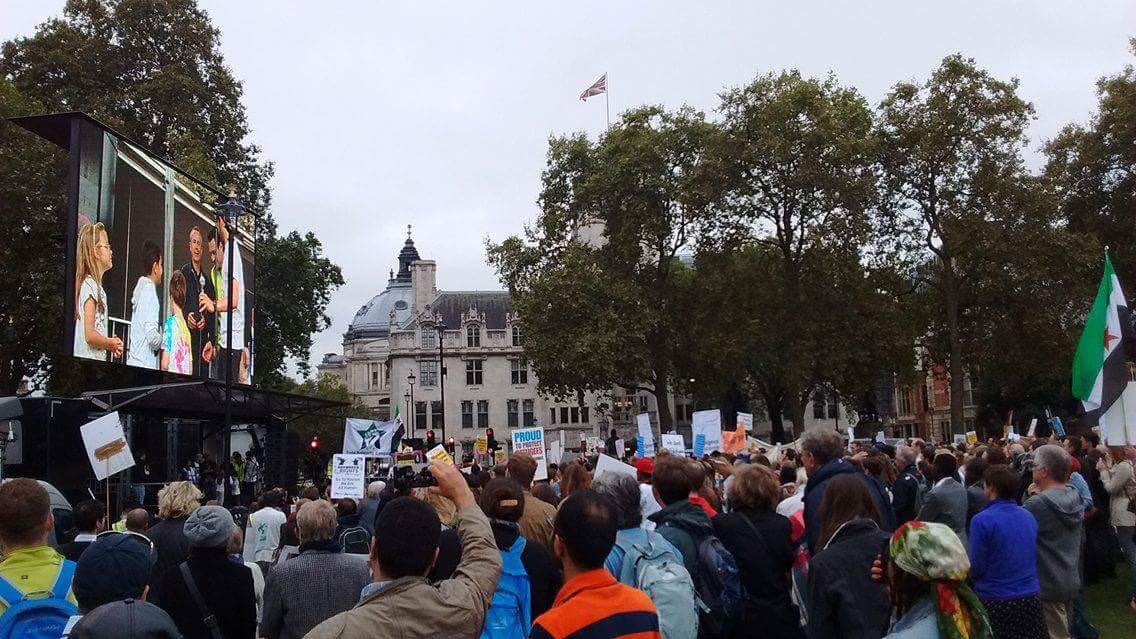 Pushing back against a tide of xenophobia which has gripped portions of Europe in recent years, thousands marched in central London on Saturday as they demanded the British government do more to help those forced from their homelands amid endless war in the Middle East and economic crises across Africa and beyond.

Under an overall message declaring “Refugees Welcome,” many of the estimated 30,000 people marching carried signs reading “We Stand with You”; “No to Islamophobia. No to war.”; “Safety is a human right”; and “No Human Being Is Illegal.”

Though a resurgent xenophobia and nationalistic fervor has been the response to the influx of refugees in some places, Kate Allen, director of Amnesty International UK, explained the purpose of Saturday’s march, in addition to applying political pressure, was largely “to show that actually ordinary people in Britain care deeply about refugees.”

Organized by Amnesty, Refugee Action, and other groups, the march comes just two days before a United Nations summit begins in New York to address the humanitarian crisis that has seen large numbers of refugees fleeing to Europe from their war torn homes in the Middle East, with a large portion from Syria, as well as those making the dangerous Mediterranean Sea crossing from North Africa.

According to the UN’s refugee agency, an estimated 300,000 people have crossed the Mediterranean to Europe this year alone. Of those, over 3,200 have died or gone missing, and tens of thousands remain stranded in Greece under terrible conditions.

Allen argues the Conservative-led government’s response has fallen well short, but that many British citizens are actively engaged in helping those in need. “While the government’s failure of leadership on the refugee crisis has been utterly shocking,” she said, “local communities have taken matters into their own hands and have been doing what they can to support refugees. Some have campaigned for their councils to take in refugees and held fundraising events or run English classes. Others have been driving supplies over to Calais or heading out to volunteer in refugee camps in Greece.”

As this video put out ahead of the march by organizers shows, the call for increased solidarity with the refugee community is coming from all quarters:

Saturday’s march, as the Independent reports,

comes a year after around 100,000 protesters took to London’s streets calling on the UK to resettle more asylum seekers amid the international outcry over the death of Alan Kurdi, a three-year-old Syrian boy who drowned trying to reach Greece.

The Solidarity With Refugees group said Saturday’s protest aimed to “show our Government and the world that Britain is ready to welcome more refugees”.

“The UK should be leading the way and working with other states to give refugees safe, legal routes to asylum, ending the trade in people smuggling,” a spokesperson said.

“Since the referendum campaign and vote, divisive rhetoric has been ever more prevalent from a small but vocal minority. In the light of this, the need to come together in a spirit of welcome has become even more acute.”

Freshta Sharif, whose family escaped Afghanistan in 1993, attended the rally and explained: “As a refugee I know how important it is for countries to welcome and offer sanctuary to people fleeing violence and persecution. If it wasn’t for the UK granting asylum to my family after it got too dangerous for us to stay in Afghanistan, I might not be here today. We’re in the middle of a massive refugee crisis and I would like to see UK politicians commit to throwing the same lifeline to far more people who need it.”

Despite often being referred to as a “refugee crisis,” international aid groups have been eager to reject that construct. As Common Dreams reported earlier this year, groups like Global Justice Now have argued what the world is really witnessing when it comes to the large numbers of displaced individuals and families is “a crisis of global injustice caused by war, poverty, and inequality.”

“To demonize those making a rational choice on the part of themselves, their family and their community, obscures the truth,” the group explained in briefing paper. “Migration is bringing those of us in Europe face to face with the reality of the brutal and unjust world our leaders have constructed.”