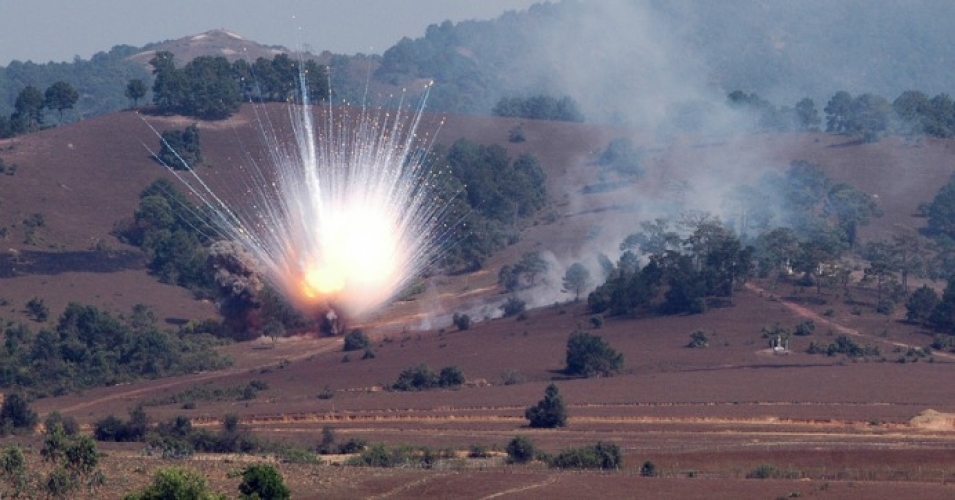 Further damning the United States government’s planned sale of $1.15 billion worth of weapons to Saudi Arabia, evidence has emerged that the kingdom may be using white phosphorus supplied by the U.S. in its campaign in Yemen, according to reporting Monday by the Washington Post.

The Post reports that the evidence comes from “images and videos posted to social media.”

White phosphorous munitions—sometimes compared to napalm as they can cause nearly unstoppable burning that can reach the bone—are not covered by a blanket ban by international law. They are allowed (pdf) to be used in open areas as a smoke screen for military operations, but, as they can ignite spontaneously in air, are prohibited from use against civilians and in civilian-concentrated areas. U.S. regulations also prohibit their sale unless their use will be solely for “signaling and smoke screening.”

U.S. officials confirmed that the American government has supplied the Saudis white phosphorous in the past but declined to say how much had been transferred or when. After reviewing a social media image taken from the battlefield that showed a white phosphorous mortar shell, a U.S. official said it appeared to be American in origin but could not trace it to a particular sale because some of the markings were obscured. […]

The official said the department was looking into reports of Saudi forces’ improperly using U.S.-supplied white phosphorous munitions. “If a country is determined to have used U.S.-provided weapons for unauthorized purposes, the U.S. will take appropriate corrective action,” the official said.

The image the anonymous official looked at was first posted to Instagram in November 2015, Gibbons-Neff writes, while the most recent image posted to social media purportedly showing their use by the U.S.-backed coalition in Yemen was take Sept. 9, 2016.

Gibbons-Neff also points out that the U.S. has directly used white phosphorus “including in 2004 in Fallujah, Iraq, and sporadically in Afghanistan over the course of the war there. In 2009, Israel used the weapon in populated areas in the Gaza Strip.” Human Rights Watch said that use by Israel was evidence of war crimes.

“As a major arms seller to Saudi Arabia, the U.S. risks being complicit in Saudi Arabia’s likely war crimes in Yemen,” the Post quotes Sunjeev Bery, Amnesty International’s advocacy director for the Middle East and North Africa, as saying.

Amnesty International said, based on consultations with internal weapons experts, that it was a U.S.-made bomb used in the Aug 15, 2016 Saudi-led coalition airstrike that hit a Doctors Without Borders-supported hospital in Yemen, killing 11 people.

“It is outrageous that states have continued to supply the Saudi Arabia-led coalition with weapons, including guided and general purpose aerial bombs and combat aircraft, despite stark evidence that those arms are being used to attack hospitals and other civilian objects and in other serious violations of international humanitarian law,” stated Philip Luther, research and advocacy director for the Middle East and North Africa at Amnesty International.

“This attack highlights, yet again, the desperate need for a comprehensive embargo on all weapons that could be used by any of the warring parties in Yemen and for an international investigation to bring those responsible for unlawful attacks to justice,” his press statement continued.

The Saudi Arabia-led military coalition has been repeatedly accused of committing war crimes, and just last week, an analysis found that over one-third of the coalition’s air strikes in Yemen since the bombing campaign began have hit civilian targets such as schools and hospitals.

The U.S. complicity in all this haven’t been lost on lawmakers. Sixty-four U.S. House members last month wrote to the White House to call for a stop to the arms and military equipment sale, and a vote may come this week on legislation introduced by Senators Rand Paul (R-Ky.) and Chris Murphy (D-Conn.) to block the sale.

William Hartung, director of the Arms and Security Project at the Center for International Policy, wrote in a report earlier this month: “Since taking office in January 2009, the Obama administration has offered over $115 billion worth of weapons to Saudi Arabia in 42 separate deals, more than any U.S. administration in the history of the U.S.-Saudi relationship.”