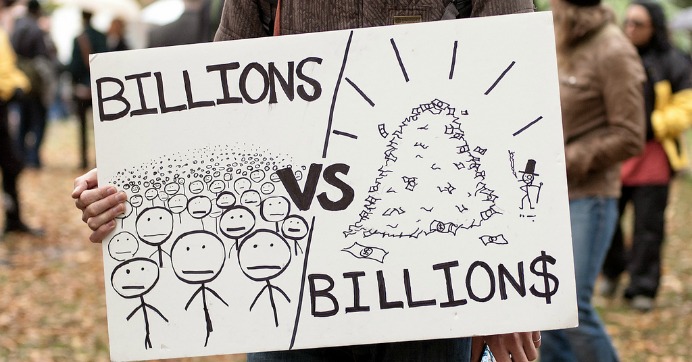 According to Public Citizen, the corporate-backed campaigns have an average of 10-to-1 financial advantage over their mostly grassroots opponents(Photo: Jason Hargrove/cc/flickr)

This election cycle, corporate donors are not just beefing up the war chests of their most-favored politicians. According to a new study, industry is flexing its Supreme Court- approved political power to dominate local democracy, as well.

In the study, Big Business Ballot Bullies (pdf), Public Citizen examined eight state-level ballot initiatives and referenda that have seen an outsized amount of political spending. According to the research, published Wednesday, the corporate-backed campaigns have an average of 10-to-1 financial advantage over their mostly grassroots opponents, with total corporate spending in those races topping $139 million.

“These findings should be deeply disturbing to anyone who is concerned about the power of corporate money to distort our democracy,” wrote report author and Public Citizen research director Rick Claypool in a Thursday op-ed.

Big Pharma tycoons Pfizer and Johnson & Johnson have spent the most, each contributing more than $7 million to defeat California’s Drug Price Standards Initiative, or Proposition 61, which seeks to lower prescription prices in that state. So far, the industry-backed group opposing that measure has raised more than $86 million.

Colorado’s Amendment 69, which would install a universal, Medicare-for-All system for state residents, has won the ire of the insurance industry, with Anthem, United Healthcare, and others spending hundreds of thousands to back the opposition.

Also in Colorado, an anti-fracking measure that would have set a mandatory setback for oil and gas development saw millions of opposition spending, including $6.55 million from Anandarko Petroleum Company, before it failed to make November’s ballot.

Other high-interest fights include:

Beyond the report, there are numerous other local initiatives—such as a pro-charter school measure in Massachusetts and Arizona’s marijuana legalization effort—that have also garnered significant industry attention.

“The sheer magnitude of corporate money in these races undermines the power of ballot initiatives and referenda to make policy that prioritizes the public interest over private profits,” said Claypool.

And Public Citizen president Robert Weissman added, “Across the country, and for more than a century, people have used initiatives and referenda to drive forward social and economic justice from the ground up. Corporations spending outrageous sums to defeat ballot initiatives undermine our democracy and cast doubt on the public’s ability to make effective use of this long-standing American democratic institution.”

“But the solution to Citizens United and Bellotti is the same,” he wrote, “a constitutional amendment, such as the Democracy For All Amendment that was supported by a majority of U.S. senators in 2014, can overturn both rulings by asserting the state’s authority to limit corporate election spending.”