Study by former IPCC chair comes amid rash of new research, all predicting the Earth will soon blow by key global warming thresholds 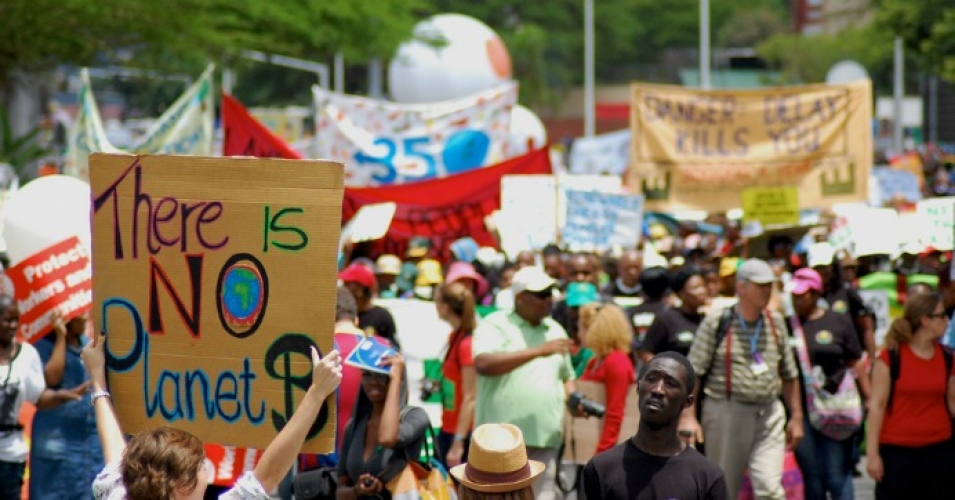 Indeed, “There is No Planet B.” (Photo: theverb.org/cc/flickr)

To much fanfare, global leaders have agreed to tackle the climate crisis by ratifying the Paris climate agreement, but a group of esteemed scientists is warning that current pledges to reduce emissions are far from sufficient and, in fact, put the world on track to reaching the dangerous 2°C climate threshold by 2050.

“The pledges are not going to get even close,” said Sir Robert Watson, former chair of the Intergovernmental Panel on Climate Change (IPCC), and lead author of a new report out Thursday. “If you governments of the world are really serious, you’re going to have to do way, way more.”

Aptly titled The Truth About Climate Change, the report, put forth by the Argentina-based Universal Ecological Fund (Fundación Ecológica Universal FEU-US), comes amid a rash of new research, all suggesting that key global warming thresholds will be reached much more rapidly than previously thought.

Led by Watson, the team examined the climate commitments, known as Intended Nationally Determined Contributions (INDCs), put forth by COP21 signatories and concluded that the delayed commitment to climate action has essentially eliminated the possibility to keeping the Earth’s temperature increase beneath 1.5°C.

[T]he 1.5°C target has almost certainly already been missed because of the lack of action  to stop the increase in global GHG emissions for the last 20 years. Global average temperature  has already reached 1°C above pre-industrial times in 2015, as reported by the World  Meteorological Organization. This is a significant increase, compared to the 0.85°C above pre-industrial times in 2012 reported by the IPCC. An additional warming of 0.4-0.5°C is expected as a consequence of GHGs that have already been emitted. This additional increase in global  temperature is due to the slow response of the ocean-atmosphere system to the increased atmospheric concentrations of GHGs.

Global GHG emissions are not projected to decrease fast enough, even if all the pledges are fully implemented. Full implementation of the pledges will require the promised US$100 billion per year in financial assistance for developing countries to be realized. As a result, the 1.5°C target could be reached by the early 2030s and the 2°C target by 2050.

Further, the researchers minced no words when laying the blame for the missed targets on “political and sectoral interests,” including those “benefiting from the use of fossil fuels,” for promoting “deliberate misinformation” about the current situation.

Thursday’s study, which came just one day before European leaders agreed on a fast-track, joint ratification of the Paris accord, concludes with a call for nations to “rais[e] the ambition of the INDCs” and commit to “a radical change in the way the world produces and uses energy.”

Much like the landmark report published last week by fossil fuel watchdog Oil Change International, the latest findings leave no room for future emissions or new fossil fuel infrastructure projects. Even as the commitments stand, scientists predict that U.S. will miss its target for 2025 if “fundamental changes” are not made.

In the past week, two separate reports have warned that the planet will likely pass the 1.5ºC benchmark this decade and, under current emissions projections, is “locked in” to reaching a 2 million-year temperature record.

With 2016 on track to set another heat record, the wave of research comes as the planet reached another grave milestone: atmospheric carbon has permanently surpassed 400 parts per million (ppm).

“If we’re going to have a chance of dealing with climate change, it means mobilizing in ways that we haven’t in a very long time,” he continued:

In this case, it’s not that we need to go to war with climate change, it’s that we’re under siege. I mean, by all the measures by which one thinks about warfare, we’re in one. We’re losing territory all the time. I mean, there are literally islands disappearing. You know, we’ve lost huge swaths of the coral in the world this year alone. A wave of warm water swept across the Pacific and the Indian Ocean. In many places, 80, 90 percent of coral died in a matter of weeks, these atolls that have been there forever in the Arctic. You know, ice that’s been there for millennia upon millennia is now gone. I mean, the world looks entirely different from a satellite now than it did 30 years ago.

According to the cumulative research, that’s not a viable option. Watch the segment below: