By Darius Shahtahmasebi. Published 10-602016 by The Anti-Media 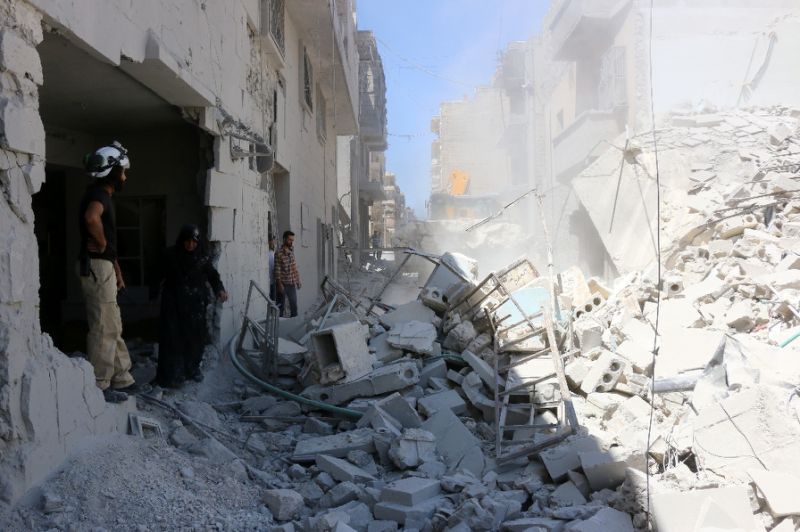 Depending on which news outlets you follow, your understanding of what is going on in Syria is likely coming from one of two main camps — Western media or Eastern media. Western media, in tandem with the Arab Gulf states, has almost completely pinned the blame for the crisis in Syria on the current president, Bashar al-Assad. Any residual blame left for the taking is delivered to Russia and Iran.

Those of us who inform ourselves daily from an eclectic range of media sources tend to have a broader understanding of the conflict in Syria. The more critical one becomes of both ends of the media spectrum, the more one can evaluate the veracity of the respective outlets (for example, the peddling of statistics from a T-shirt shop in England versus the use of satellite imagery).

Analyzing all forms of media leads to only one conclusion regarding the current crisis in Syria: all of the parties involved have an overwhelming amount of blood on their hands and are playing a role in the ongoing war. However, the evidence suggests there is one group of nations, headed by the world’s superpower, that has once again created a humanitarian catastrophe rivaling that of history’s worst dictators.

Although corporate media has portrayed the situation in Syria as being one of a popular uprising against a brutal and murderous dictator, the truth is far more complex.

According to four-star General Wesley Clark, Syria was one of seven countries the Pentagon targeted for regime change following the attacks of September 11, 2001. The others were Libya, Lebanon, Somalia, Sudan, Iraq, and Iran. This intention to take out Syria’s leader prior to the start conflict in 2011 was confirmed by Wikileaks (you can access the relevant chapter in its entirety here). According to Julian Assange, Assad’s overthrow was planned as far back as 2006. As explained by MintPress News:

“WikiLeaks cables reveal these plans came from the Israeli government, and show that the U.S. government intended to work with Saudi Arabia, Turkey, Qatar and Egypt to encourage the breakdown of the Assad regime as a way of also weakening Iran and Hezbollah.”

MintPress News further explains that according to Assange, “…the U.S. government sought to make the Syrian government appear weak by causing Assad to overreact to the threat of Islamic extremists crossing into his country.”

Former French Foreign Minister Roland Dumas further confirmed these claims when he claimed top British officials approached him to ask if he wanted to participate in their plans to prepare for war against Syria two years prior to the eruption of the conflict.

“This operation goes way back. It was prepared, preconceived, and planned… in the region it is important to know that this Syrian regime has a very anti-Israeli stance.

“Consequently, everything that moves in the region… and I have this from a former Israeli Prime Minister who told me we will try to get on with our neighbors but those who don´t agree with us will be destroyed. It is a type of politics, a view of history, why not after all. But one should know about it.”

This should all be headline news, but apparently what happens to Kim Kardashian — notable laureate that she is — is far more important.

Having instigated the conflict in 2011, the U.S. establishment predicted Assad would fall in a similar manner to that of Muammar Gaddafi. However, nuclear giants Russia and China, having been completely duped by Western promises that Gaddafi would not be forcibly removed from power in 2011, used this knowledge to consistently veto any proposal to interfere in the Syrian conflict.

Despite the deceptiveness of NATO’s operations in Libya, Russia has tried to facilitate the end of the Syrian war for some time now. In fact, Russia put forward a proposal in 2012 that Assad would step down as a part of a potential peace deal. As stated by former Finnish president and Nobel Peace Prize laureate Martti Ahtisaari, “it was an opportunity lost in 2012.”

Why did the Americans reject this proposal? Because, as acknowledged by Ahtisaari:

“Nothing happened because I think all these, and many others, were convinced that Assad would be thrown out of office in a few weeks so there was no need to do anything.”

Four years later, the war is still raging. Western media has focused on the current situation in Eastern Aleppo, which has seen Russian and Syrian warplanes ravage the terrorist-held area. I say “terrorist-held area” because the areas being targeted by Russia and Syria are held by al-Nusra offshoot Jabhat Fateh al-Sham and its affiliated groups. Al-Sham is essentially al-Qaeda in Syria but was forced to change its name because Russia has repeatedly requested that the U.S. distinguish between moderate rebel groups and those that wish to be identified with al-Nusra. Citing Reuters, the Guardian referenced the social media outlet of another Aleppo-based rebel faction known as the Levant Front, alsoquoting one of its officials. The Levant Front is also heavily affiliated with al-Qaeda.

Remember when George W. Bush told us we were at war with al-Qaeda following the attacks on September 11, 2001? Apparently, they are our ally now. Essentially, what Western media and Western governments are saying is that the Assad and Putin regimes are wrong to be targeting al-Qaeda-affiliated groups, something the U.S. establishment has claimed to be doing for over a decade.

Western media has also conveniently ignored attacks from these so-called moderate rebels, who have been shelling government-held areas of Aleppo. Aleppo is home to 1.5 million civilians. Conversely, fewer than 300,000 civilians are trapped in rebel-held areas of Aleppo (do you really expect these al-Qaeda affiliated rebels to look after and provide shelter for civilians?).

And where did these rebels (insert: terrorists) receive their weaponry, funding, and training? This is a topic for a separate article, but one can be assured it was not from the Russian and Syrian regimes. The U.S. establishment has poured in an immense amount of money, only to see failed programs in which the weaponry (and often fighters) end up in the hands of al-Qaeda. This is not a new or unforeseen problem, either; the New York Times reported as far back as 2012 that the majority of weapons being sent to Syria had ended up in the hands of extremists.

Is Russia sending arms to jihadists? No.

Even now, as Russia and the United States coalition have stepped up their involvement in recent years, the U.S. refusesto coordinate and respond to Russia’s repeated requests to work together. If the stated goal was to truly eradicate ISIS and terrorism in the region, the U.S. would surely love to work in tandem with the Russian authorities. However, the U.S. has shown time and time again it will not tolerate any progress Russia is making in combating ISIS or groups such as al-Nusra.

No one would deny the governments of Syria, Russia, and Iran have an enormous amount of blood on their hands. Allegations and claims by the United Nations that the Syrian government has tortured and killed detainees on a massive scale – a crime against humanity – are proof alone that the Syrian regime needs to face accountability for its actions.

However, the hypocrisy of opposing one Middle Eastern dictator while supporting others responsible for truly heinous crimes raises questions regarding the United States motives in Syria. In Libya, Muammar Gaddafi had a cozy relationship with former U.K. Prime Minister Tony Blair; the British government would send dissidents to Libya to be tortured (before the British government turned their back on Gaddafi in 2011).

So, who is responsible for the current crisis in Syria?

Syria was once a middle-income country before the conflict erupted into a humanitarian catastrophe. The evidence at hand, in particular from overlooked Western sources, overwhelmingly points to outside intervention, by which external powers have conspired, plotted, and poured billions upon billions of dollars into arming extremist opposition groups to take out an unfriendly regime. The powers-that-be could have allowed Assad’s removal via Russia’s proposed peace deal in 2012, but they decided not to accept it — and in turn have maximized the death toll of the conflict.

Do not underestimate the power of the CIA to manufacture opposition to regimes unfriendly to the West. Do not underestimate the West’s ability to concern itself more with geopolitical and strategic concerns rather than humanitarian ones – a point that is consistently ignored in Western coverage of the Syrian conflict. One only needs to turn to history to see this approach has been a dominant tool of American foreign policy for decades. The most strikingly obvious example of this – to which the CIA has admitted its involvement – is when the U.S. and U.K. instigated a coup to overthrow the democratically elected leader of Iran, Mohammad Mosaddegh, over oil.

“Britain, and in particular Sir Anthony Eden, the foreign secretary, regarded Mosaddeq as a serious threat to its strategic and economic interests after the Iranian leader nationalised the British Anglo-Iranian Oil Company, latterly known as BP. But the UK needed US support. The Eisenhower administration in Washington was easily persuaded.”

If Russia had intervened to save the Iranian regime in 1953 from clamping down on a CIA-manufactured uprising, would we be blaming Russia and Iran for the crisis that unfolded?