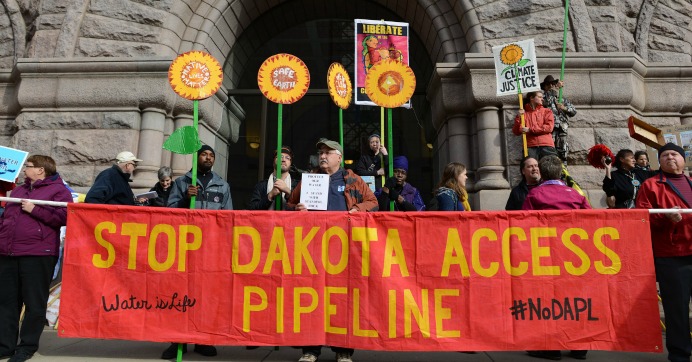 Protesters can leave the property, the company stated Tuesday, according to the Associated Press. “Alternatively and in coordination with local law enforcement and county/state officials, all trespassers will be prosecuted to the fullest extent of the law and removed from the land.”

“Lawless behavior will not be tolerated,” it stated.

But according to the Sacred Stone Camp, the new camp, which sits “directly on the proposed path of the Dakota Access Pipeline (DAPL),” is not on land owned by Energy Transfer Partners; rather, it is “unceded territory affirmed in the 1851 Treaty of Ft. Laramie.”

“We have never ceded this land,” said Joye Braun, Indigenous Environmental Network organizer, in a weekend press release. “If DAPL can go through and claim eminent domain on landowners and Native peoples on their own land, then we as sovereign nations can then declare eminent domain on our own aboriginal homeland.”

As Common Dreams reported, the erection of the new camp came amidst “escalating attacks on protesters by local law enforcement officials.”

Condemning the escalation, chairman of the Standing Rock Sioux Tribe Dave Archambault II stated Monday, “North Dakota law enforcement have proceeded with a disproportionate response to their nonviolent exercise of their First Amendment rights, even going as far as labeling them rioters and calling their every action illegal.”

He also wrote to U.S. Attorney General Loretta Lynch calling for a Justice Department (DOJ) investigation into possible civil rights violations, writing that “state and local law enforcement have increasingly taken steps to militarize their presence, to intimidate participants who are lawfully expressing their views, and to escalate tensions and promote fear.”

Archambault’s letter also noted the recent arrest of Democracy Now!‘s Amy Goodman, saying it was “part of a larger effort by local law enforcement to intimidate the press and to prevent the full and fair reporting of the activities of law enforcement on this matter.”

The DOJ responded, saying the administration had requested that Dakota Access put construction on hold.

“While the Army continues to review issues raised by the Standing Rock Sioux Tribe and other tribal nations and their members, it will not authorize constructing the Dakota Access Pipeline on Corps land bordering or under Lake Oahe. In the interim, the departments of the Army, Interior, and Justice have reiterated our request that the pipeline company voluntarily pause all construction activity within 20 miles east or west of Lake Oahe,” stated DOJ spokesman Wyn Hornbuckle.

Actor and environmental activist also Mark Ruffalo also brought his voice to the Standing Rock Sioux Reservation on Tuesday. Referring to law enforcement’s actions towards water protectors, he said, “They are very antagonistic to people trying to save their water, they’re made out to be criminals. But each time they hit us, they lose. The more quiet and serene we are in the depth of that violence, the faster we win,” he said.

“That’s where our strength is: We’re right and they know we’re right.”

Linking the pipeline’s future to the U.S. presidential campaign, the Guardian reports Wednesday on the “close financial ties” Donald Trump has to the pipeline operator, writing that chief executive Kelcy Warren has given $103,000 in campaign contributions to the Republican presidential nominee, and that Trump “has between $500,000 and $1m invested in Energy Transfer Partners, with a further $500,000 to $1m holding in Phillips 66, which will have a 25 percent stake in the Dakota Access project once completed.”

Out of fairness of disclosure and because we remain apolitical in our views, we did discover that big oil and gas have contributed more to Clinton than to Trump in an overall industry comparison.