The results offer ‘a strong message to all of Washington: If you’re not working to create a fair economy, we’ll do it ourselves’ 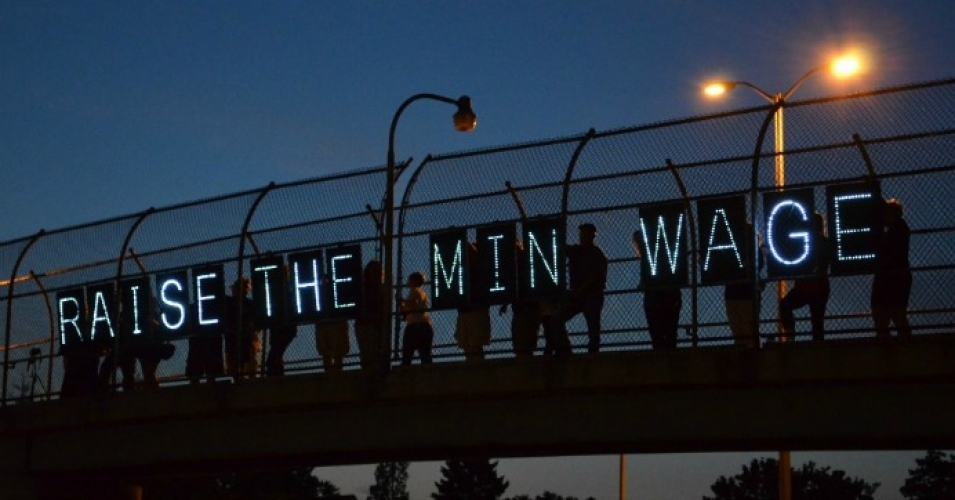 The results, said Jonathan Schleifer, executive director of The Fairness Project, “mark a new moment in American politics where voters will no longer wait for politicians—who have failed them time and time again—to fix our broken economy.” (Photo: Wisconsin Jobs Now/flickr/cc)

Voters in four states—Arizona, Colorado, Maine, and Washington—said yes on Tuesday to ballot initiatives that will boost their state’s minimum hourly wage, offering hope, advocates say, of an increased standard of living for roughly 2.1 million workers.

According to Jonathan Schleifer, executive director of The Fairness Project, the results “mark a new moment in American politics where voters will no longer wait for politicians—who have failed them time and time again—to fix our broken economy.”

Calling the results a “resounding win for economic equality,” Schleifer, whose organization partnered with ballot initiative campaigns in the states, said the outcome “sends a strong message to all of Washington: If you’re not working to create a fair economy, we’ll do it ourselves.”

It also mandates paid sick leave—40 hours a year for those at businesses with 15 or more employees; 24 hours annually for those with fewer with less than 15 employees.

Arizona Healthy Families, the organization behind Proposition 206, said on Twitter that it was “a major victory for Arizona working families.”

Ahead of the vote, Lizeth Chacon, co-chair of Colorado Families for a Fair Wage, called(pdf) the wage boost “fair and smart—fair because people working full time should earn enough to support their families without being forced to rely on public assistance, and smart because people with money in their pockets to spend boosts the local economy and creates jobs.”

“If the Legislature fails to act year after year after year while more and more Mainers continue to struggle in poverty,” said Amy Halsted, campaign manager for Mainers for Fair Wages, “people band together to do something about it.”

With the passage of Initiative 1433, Washington state will incrementally raise its minimum wage from $9.47 to $13.50 by 2020. Like Arizona’s measure, the initiative mandates that employers offer paid sick leave—for every 40 hours worked, employees will get one hour of paid sick leave.

It passed 59 percent to roughly 40 percent.

Celebrating the results, Raise Up Washington, the organization supporting the initiative, said on Facebook: “Washington—YOU WON. Tonight, you’ve given a raise to hundreds of thousands of workers and families and ensured that every worker can earn paid sick leave.”

Advocates hope that the wins in Arizona, Colorado, Maine, and Washington could be harbingers of more such worker-benefiting measures. Noting the strong voter enthusiasm, Schleifer said ahead of Election Day that “the success of these measures will inspire even more ballot initiatives in the coming years.”