‘This court just gave the youth of this country the critical opportunity to protect their futures,’ said attorney Julia Olson 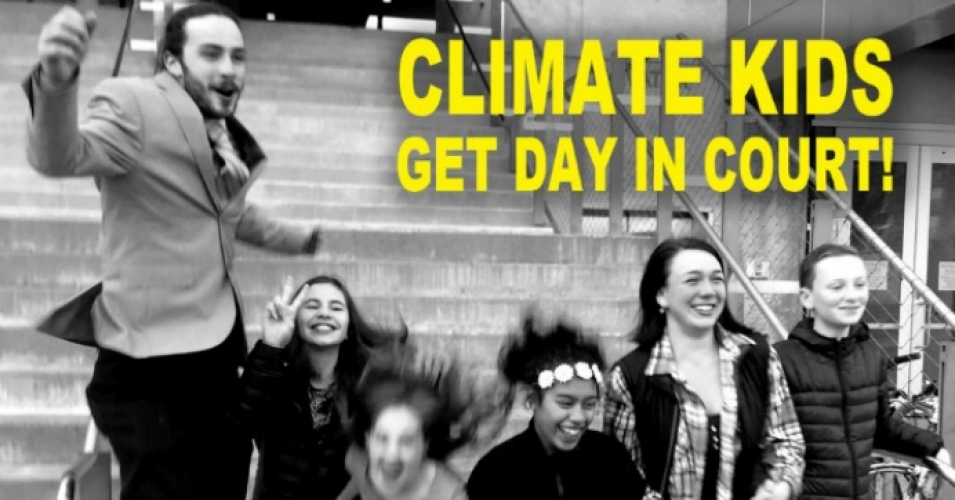 “We’re doing what so many people told us we were incapable of doing: holding our leaders accountable for their disastrous and dangerous actions,” said Xiuhtezcatl Martinez, a 16-year-old plaintiff and youth director of Earth Guardians. (Image via EcoWatch)

In a powerful late Thursday ruling, a U.S. judge dismissed all attempts by the federal government and Big Oil to block a landmark trial brought by young people on behalf of the environment, in a case that advocates say could be a “turning point in United States constitutional history.”

“Federal courts too often have been cautious and overly deferential in the arena of environmental law, and the world has suffered for it,” wrote (pdf) U.S. District Court Judge Ann Aiken as she moved to reject all arguments to dismiss raised by the Obama administration and fossil fuel industry.

The case, brought by youth plaintiffs aged 9-20 as well as renowned climate scientist Dr. James Hansen, argues that the federal government is failing to protect their constitutional right to a stable climate.

In her ruling, Aiken determined that the youth complaint is valid, reasoning, “Although the United States has made international commitments regarding climate change, granting the relief requested here would be fully consistent with those commitments.”

Further, she noted the defendants’ claims that the suit is invalid because “plaintiffs likely could not obtain the relief they seek through citizen suits brought under the Clean Air Act, the Clean Water Act, or other environmental laws,” but said “that argument misses the point.”

“This action is of a different order than the typical environmental case,” Aiken wrote. “It alleges that defendants’ actions and inactions—whether or not they violate any specific statutory duty—have so profoundly damaged our home planet that they threaten plaintiffs’ fundamental constitutional rights to life and liberty.”

The plaintiffs are seeking a declaration that their constitutional and public trust rights have indeed been violated, as well as an order enjoining the government from further violating those rights with a directive to develop a plan to reduce carbon emissions.

As the case now moves to trial, attorneys representing the 22 plaintiffs say that a final verdict could be “one of the most significant in our nation’s history.”

“This court just gave the youth of this country the critical opportunity to protect their futures,” said Julia Olson, counsel for the plaintiffs and executive director of of the nonprofit advocacy group Our Children’s Trust. “In what will be the trial of the millennium, these young plaintiffs will prove that their federal government, in cooperation with the fossil fuel industry, has knowingly put them in grave danger, trading their futures for present convenience and gross profits for a few.”

“My generation is rewriting history,” agreed Xiuhtezcatl Martinez, a 16-year-old plaintiff and youth director of Earth Guardians. “We’re doing what so many people told us we were incapable of doing: holding our leaders accountable for their disastrous and dangerous actions. I and my co-plaintiffs are demanding justice for our generation and justice for all future generations.”

The suit is one of several legal cases making the argument that governments have a constitutional duty to protect the environment for young people. Other cases are pending in the U.S., as well as in Sweden, the Philippines, Uganda, Pakistan, and Norway.