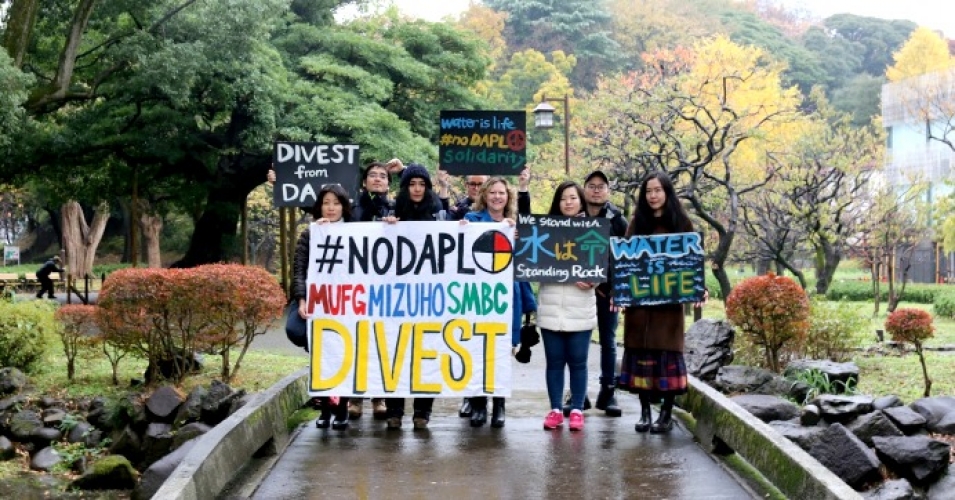 Organizers report that after the series of demonstrations on Thursday, Wells Fargo—a Dakota Access Pipeline investor—has agreed to meet with the Standing Rock Sioux Tribe: 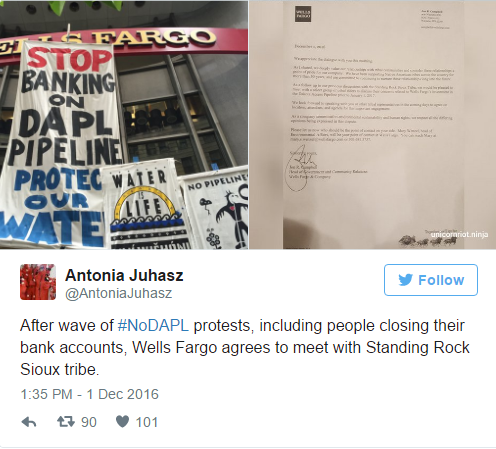 “These catastrophic projects can’t continue, and as citizens of Planet Earth, we can’t allow banks to use our money to fund them,” said Barb Drake, an organizer of the Seattle action, which saw over 100 people calling on Wells Fargo to divest from the project.

“These are not normal times, and this is not normal business,” Drake said. “We’re encouraging everyone to close their accounts at the funders of DAPL, and we’ll do the same for funders of other dirty energy projects, like tar sands development. The stakes are just too high.”

Across the Pacific Ocean, 350.org Japan and Greenpeace held a demonstration in Tokyo after sending a letter (pdf) demanding that Japan’s major banks—some of the largest Dakota Access Pipeline financiers—immediately divest from the project.

“All Japanese banks involved in financing DAPL are signatories to the Equator Principles, a risk management framework adopted by financial institutions for determining, assessing, and managing environmental and social risk in project finance,” the groups said in a statement. “Ignoring the threat posed to the health and livelihoods of the Sioux Tribe, in addition to the violent police activity that has been imposed upon the protestors, is clearly a violation of the Equator Principles.” 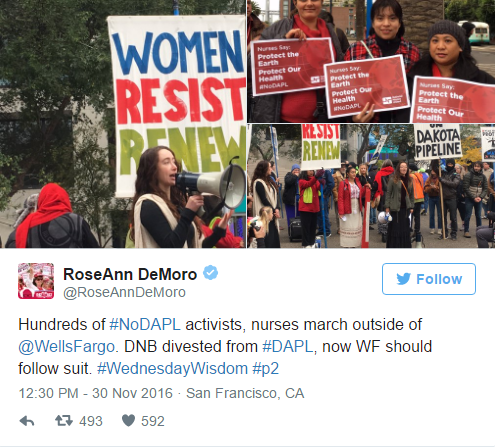 And independent media collective Unicorn Riot live-streamed the demonstration at a Wells Fargo branch in Minneapolis, Minnesota. The activists sought to “disrupt business as usual” to demand divestment from the pipeline, the outlet reports:

The international campaign calling for divestment from the Dakota Access Pipeline has already been successful in Norway, whose largest bank and leading investment manager divested from the project last month. Native Americans in the U.S. and Indigenous Samí people in Norway coordinated with each other and successfully convinced banking executives of the link between the project and human rights abuses. Organizers are optimistic that banks in other countries will soon follow suit.

Thursday’s mobilizations were a part of a Global Day of Action to start off a month of demonstrations calling for an end to the Dakota Access Pipeline. “We call on allies across the world to take action EVERY DAY starting December 1,” organizers write.

Supporters of the water protectors in North Dakota can find and join a solidarity action here.