‘For the first time in Native American history, they heard our voices.’ 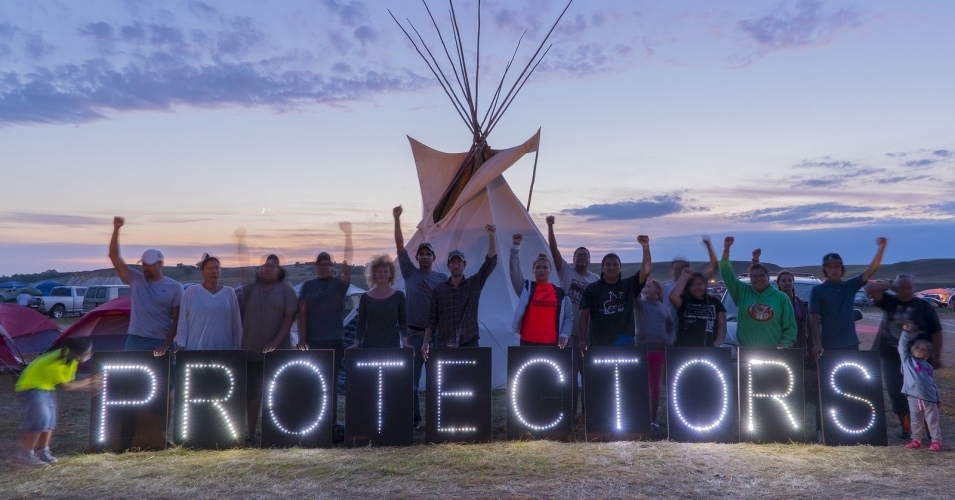 The water protectors have been battling the pipeline construction for months. (Photo: Joe Brusky/Overpass Light Brigade/flickr/cc)

In a long-awaited victory for the Standing Rock Sioux Tribe, the U.S. Army Corps of Engineers has denied a permit for the Dakota Access Pipeline, tribal leadership announced late Sunday.

The agency will not allow the pipeline to be built under Lake Oahe, a reservoir near the tribal reservation, without a full environmental impact assessment that examines alternative routes for the pipeline.

While acknowledging that it may only end up being a temporary pause in pipeline construction, many see it as an incredible victory for the water protectors, who have faced water cannons, mace, rubber bullets, mass arrests, and more in their months-long struggle to protect their drinking water and treaty land.

Other activists expressed suspicion and caution, as the U.S. government has historically betrayed its promises to Native Americans, and warned that the water protectors must remain vigilant.

Yet many expressed joy and relief, and celebrated the victory. “The original peoples of these lands fought with all of our hearts against injustice and won,” wrote Honor the Earth national campaigns director Tara Houska: 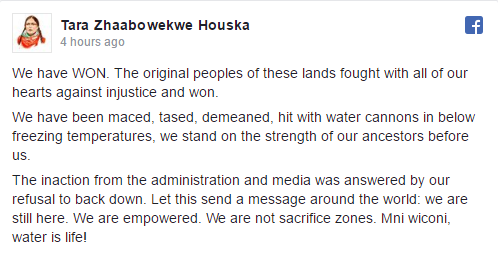 In a statement, the Standing Rock Sioux Tribe also expressed gratitude for the decision:

Today, the U.S. Army Corps of Engineers announced that it will not be granting the easement to cross Lake Oahu for the proposed Dakota Access Pipeline. Instead, the Corps will be undertaking an environmental impact statement to look at possible alternative routes. We wholeheartedly support the decision of the administration and commend with the utmost gratitude the courage it took on the part of President Obama, the Army Corps, the Department of Justice and the Department of the Interior to take steps to correct the course of history and to do the right thing.

“The Standing Rock Sioux Tribe and all of Indian Country will be forever grateful to the Obama Administration for this historic decision,” the tribe wrote.

“I am thankful there were some leaders in the federal government that realized something was not right, even though it’s legal,” said Standing Rock Sioux Tribe chairman Dave Archambault II to NBC News. “For the first time in Native American history, they heard our voices. This is something that will go down in history and is a blessing for all indigenous people.”