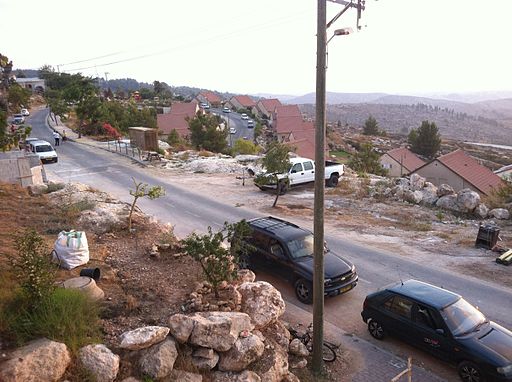 Telem, an Israeli settlement on the West Bank. Photo: חיים (received from author via OTRS) [CC BY-SA 3.0], via Wikimedia Commons

Egypt withdrew the original resolution on Thursday afternoon, reportedly “under pressure” from Trump—who tweeted on the matter Thursday morning—and Israel. Had this move worked, it could have punted the measure to the incoming Trump administration, which is seen as more friendly to Israel than that of President Barack Obama—especially after Trump’s nomination last week of conservative hardliner David Friedman to serve as U.S. ambassador to Israel.

But Reuters reported Friday that Security Council members New Zealand, Malaysia, Venezuela, and Senegal stepped in and the vote took place after all on Friday afternoon.

The draft resolution would demand Israel “immediately and completely cease all settlement activities in the occupied Palestinian territory, including East Jerusalem”, and says the establishment of settlements by Israel has “no legal validity and constitutes a flagrant violation under international law”.

Indeed, as Mohammad Alsaafin of Al Jazeera wrote on Twitter:

The U.S. abstention, which was expected, was described by Reuters as “a relatively rare step by Washington, which usually shields Israel from such action,” and “as a parting shot by U.S. President Barack Obama who has had an acrimonious relationship with Israeli Prime Minister Benjamin Netanyahu and who has made settlements a major target of peace efforts that have proven ultimately futile.”

In response to the vote, Jewish Voice for Peace executive director Rebecca Vilkomerson declared: “There is an increasing understanding among U.S. political leaders, thanks to ongoing grassroots pressure, of the need to hold Israel accountable to international law. The U.S. abstention from this resolution is a welcome sign in that regard.”

However, she added, “[w]ith President-elect Trump urging a veto of even this mild resolution, as well as his nomination of an extreme right-wing Ambassador to Israel, we are deeply concerned by increasing U.S. support for Israeli incitement, annexation, and control under his administration and will redouble our efforts to organize resistance to policies based in Islamophobia, racism, and disregard for even the most basic rights of Palestinians.”

Trump wasn’t the only one who called on the U.S. to veto the measure; a number of U.S. senators on Friday joined him by issuing statements to that effect. And Sen. Lindsey Graham (R-S.C.), who serves as chairman of the Subcommittee on Foreign Operations of the Senate Appropriations Committee, threatened to “reduce United States assistance to the United Nations” if the body “moves forward with the ill-conceived resolution.”