“It owns all these not-at-all-important laws are smuggled into NDAAs that are signed on Christmas Eve with basically no public debate,” wrote media critic Adam Johnson 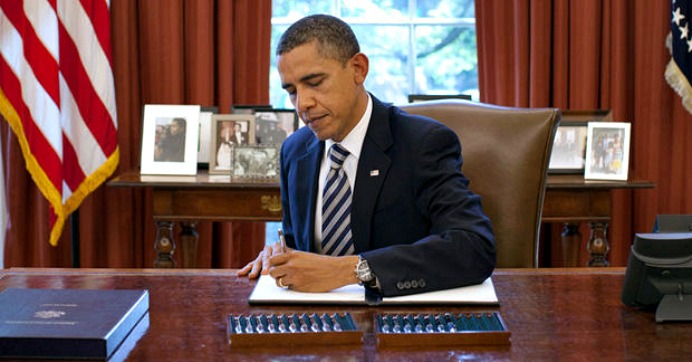 Buried within the $619 billion military budget is a controversial provision that establishes a national anti-propaganda center that critics warn could be dangerous for press freedoms. (Official White House Photo by Pete Souza)

In the final hours before the Christmas holiday weekend, U.S. President Barack Obama on Friday quietly signed the 2017 National Defense Authorization Act (NDAA) into law—and buried within the $619 billion military budget (pdf) is a controversial provision that establishes a national anti-propaganda center that critics warn could be dangerous for press freedoms.

The head of the center will be appointed by the president, which likely means the first director will be chosen by President-elect Donald Trump.

The new law comes weeks before the New York billionaire assumes the presidency, amid national outrage over the spread of fake news and what many say is foreign interference in the election, both which are accused of enabling Trump’s victory.

Those combined forces have already contributed to the overt policing of media critical of U.S. foreign policy, such as the problematic “fake news blacklist” recently disseminated by the Washington Post.

And for those paying attention over the holiday weekend, the creation of the a new information agency under the Propaganda Act appears to be another worrisome development. 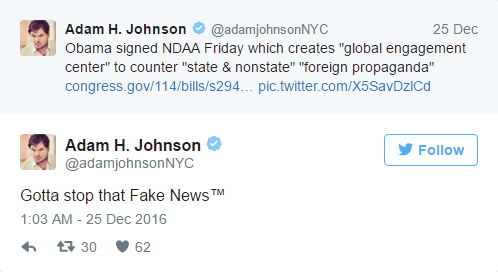 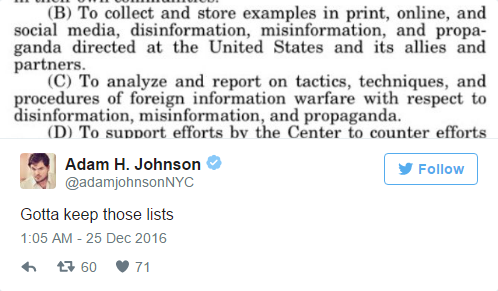