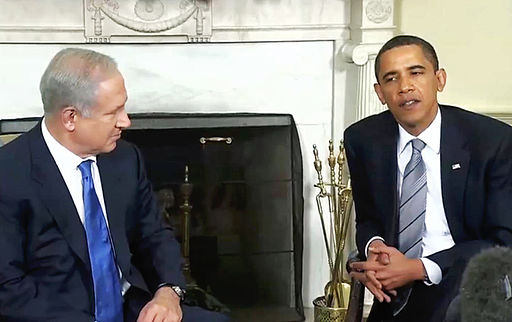 In 2011, linguist and foreign policy critic Noam Chomsky was asked whether he thought Obama was as bad as George W. Bush, to which Chomsky responded: “he’s worse.” Asked why, Chomsky cited Obama’s use of the U.N. veto at the Security Council level, which killed a resolution condemning settlement expansions that Israel was building in 2011.

After that, Obama was famously known for placing very few limits on Israel (with the exception of blocking an arms transfer during Operation Protective Edge, for example). There was also the supposed fallout between Israeli Prime Minister Binyamin Netanyahu and Obama over the Iranian nuclear agreement last year, but that agreement had nothing to do with curbing Israel’s power in the region. Anyone paying attention to the Iranian nuclear issue knows the agreement was largely symbolic and meaningless as sanctions targeting Iran have continued quite dramatically.

Just recently, the Obama administration approved the largest military package to Israel to date. Per this agreement, the U.S. will provide Israel with $38 billion worth of military aid if Israel, in turn, promises to use that money to purchase equipment from American suppliers. If there was ever any need to prove that Washington is in bed with the military-industrial machine, this deal alone kills any debate on the issue.

Israel is the largest recipient of foreign aid in the world, with the exception of Afghanistan and Iraq, which receive military funding due to the U.S. military’s long history in the countries. This aid increased under Obama. According to Colin Powell’s leaked emails, Israel also has a stockpile of at least 200 nuclear weapons, and the U.S. is well aware of this fact.

Further, since Obama took office, the population in Israel’s settlements rose dramatically from 100,000 to 600,000.

In a recent speech, as transcribed by TIME, John Kerry affirmed that no administration in U.S. history has done more for Israel’s security than Barack Obama’s:

“Our military exercises are more advanced than ever. Our assistance for Iron Dome has saved countless Israeli lives. We have consistently supported Israel’s right to defend itself by itself, including during actions Gaza that sparked great controversy.

“Time and again we have demonstrated that we have Israel’s back. We have strongly apposed (ph) boycotts, investment campaigns, and sanctions targeting Israel in international for a (ph).

“Whenever and wherever its legitimacy was attacked, and we have fought for its inclusion across the U.N. system.”

This support for Israel runs deeper than most Americans are aware — to their own economic detriment. As Kerry noted:

“In the midst of our own financial crisis and budget deficits, we repeatedly increased funding to support Israel. In fact, more than 1/2 of our entire global foreign military financing goes to Israel. And this fall we concluded an historic $38 billion memorandum of understanding that exceeds any military assistance package the United States has provided to any country at any time.” [emphasis added]

Last Friday, the Obama administration abstained from a U.N. Security Council resolution vote to condemn Israel’s settlement expansions. The resolution contains no enforcement provisions — it is not as if NATO is going to enforce it with a “no-fly zone.” Yet Israel warned New Zealand that its support for the resolution would be construed as an act of war and has recalled their ambassador from the country. President-elect Donald Trump has called the U.N. “sad” and has basically vowed to up the ante on U.S.-Israeli relations once he takes office.

Why? The world is almost unanimous in its verdict that Israel’s settlement expansions are illegal. The U.N. resolution merely affirms this. Sure, Obama could have vetoed it, but what difference would that make? Israel is already well under way in its complete disregard of the resolution. It is expanding the settlements, anyway. The Jewish state is still set to get its $38 billion worth of arms, they still have the Iron Dome defense system, and they still have nuclear weapons.

Further, Obama is well aware that in less than a month the United States is set to get a new president who is more than likely to provide unfaltering support for Israel. This resolution does nothing to stop that – if anything, it has only strengthened the reasoning behind Donald Trump’s approach to Israel.

If all of this amounts to the U.S.’ “abandonment” of Israel, perhaps the meaning of the word should be changed.

Let’s not forget that this is a country which is currently under investigation for war crimes, a fact that failed to give Obama pause when he pledged $38 billion in military aid.

There is only one group of people in that region who should feel abandoned.